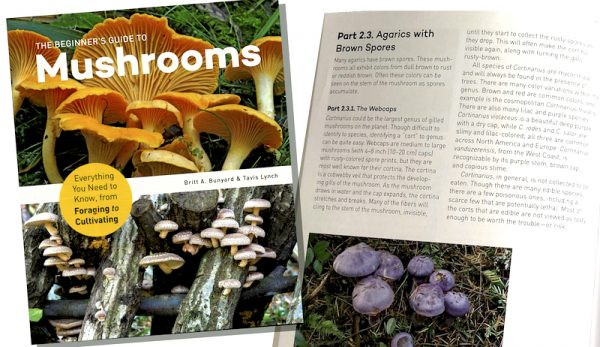 In a typical year, Britt Bunyard travels the world to seek outāand speak aboutāmushrooms of all kinds. The professional mycologist holds a doctorate in plant pathology from Pennsylvania State University and is the founder and editor-in-chief of the mycology journal Fungi. Bunyardāalong with his co-author, Tavis Lynchāalso has a new book on the way. Published by Quarry Books, The Beginner’s Guide to Mushrooms: Everything You Need to Know, from Foraging to Cultivating officially drops next week.

Despite all of the variation in the fungal world, The Beginner’s Guide to Mushrooms is organized so that budding mycologists across North America and Europe can use the resource.

“There are a lot of basic species that are common to all three areas,” Bunyard says. “In some cases, there is not the same species but something that is quite similar. I started playing around with the idea [to present mushrooms from multiple continents] and decided it could be done.”

Although you won’t find all of the common species of a single genus in The Beginner’s Guide to Mushrooms, you will get an overview of all of the different forms mushrooms can take, along with photos and descriptions.

There are also tips on mushroom preservation and cookeryāincluding how and when to use different mushroom varieties in certain dishes and how to do so safelyāas well as a brief section on mushroom cultivation.

Read more:Ā  Lobster mushrooms are a great place to start with foraging for fungus.

Mushrooms on the Move

For better or worse, guidebook authors like Bunyard and Lynch just might have to change the way they write about the natural ranges of flora and fauna in the coming years. More extreme temperatures and more frequent and extreme weather events are impacting populations of all kindsāincluding mushrooms.

While gradual changes in range are common, some moves have happened much more rapidly than expected. For instance, after comparing the mushrooms he finds near his Midwestern home to the listings in some of the older mushroom books in his personal collection, Bunyard notes, “I am seeing things now that were known only from the Gulf Coast area or Texas…. And, when you talk to some older mycologist, they will say, ‘This book was not in error. Those mushrooms were not known a few decades ago in the Midwest, and now we’re seeing them all the time.'”

Mushrooms’ fruiting times also are starting to happen earlier and earlier each year.

“One example is a Sulfur Shelf or Chicken of the Woods mushroom, which typically comes out in the summertime or quite a bit after morels,” he says. “I’m starting to see them fruiting at the tail end of morel season now.

“And the Pheasant Back, or Dryad’s Saddle, which fruits during morel season, is starting to have two seasons as well. It has become very common that it will fruit again in the fall.”

The recent wildfires that have taken place are spurring mushrooms, too. “There is a morel that’s fire-loving and comes in after burns,” Bunyard says. “Whole mountainsides can be covered with them…. So, that’s becoming a lot more commonly picked out west.”

Read more: Cut the shiitakeāgrow your own mushrooms!

Some changes in mushrooms’ ranges and fruiting times could negatively affect foragers. “There are some things that are toxic that maybe you never had to watch out for before,” Bunyard warns.

Conversely, there are some new mushrooms popping up that you just might want to get your hands on. He continues, “There is this yellow oyster mushroom called Pleurotus citrinopileatus…. It’s been cultivated here for quite a while and it seems to have escaped.”

Thought to have gotten loose in Pennsylvania, the Golden Oyster has been spotted in Ohio, Illinois and beyondāand it’s headed west. “It’s very bright yellow, and it fruits in big clusters just like other oysters,” Bunyard says.

Its taste is similar to that of many native oyster mushrooms. Unfortunately, the interloper could eventually displace them.

“It’s so aggressive that I think it may be able to out-compete other things that rot fallen wood,” Bunyard explains.

For his part, Bunyard has personally seen Golden Oysters fruiting in the wild in both late summer and early fall. “It wouldn’t surprise me to start seeing these showing up in markets, because, if they’re in an area and fruiting, it’s usually in profusion. It’s not just one or two caps.”

Susan Brackney is a freelance writer and author of the Insatiable Gardenerās Guide (Five Hearts Press, 2004) and Plan Bee: Everything You Ever Wanted to Know About the Hardest-Working Creatures on the Planet (Perigee Books, 2009).