Once in a while I fall madly in love with a plant. My most recent obsession is false blue indigo (Baptisia australis), and there’s much more to this plant than just its looks. 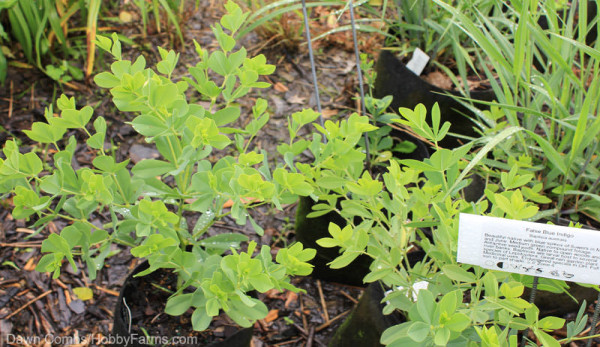 Once in a while I fall madly in love with a plant. Usually its a color or a texture that I like. I can immediately see it somewhere in my landscape and I have to have it! Recently, I fell for false blue indigo (Baptisia australis), and there’s much more to this plant than just its looks.

A Plant to Dye For
False blue indigo is a plant with a story. As the Europeans began to emigrate to this country, they missed many of the plants they usually used. Some of them were replaced with native cousins and others were imported. Plants, in fact, caused quite a stir in our history several times. One notable instance was the Boston Tea Party involving the settlers’ need for tea. It became very patriotic to “settle” for bergamot tea at the time.

One of the biggest disappointments was in being separated from true indigo, the plant that had created a lucrative trade business out of India. Today, we continue to dye clothes blue with a synthetic form of this plant. Thanks to chemical companies, you can now get blue dye in all corners of the planet. Though during the founding years of this country, if you didn’t have access to the plant, you didn’t have the color!

I personally love blue—can’t imagine not having it in my wardrobe. Our forbears, with similar preferences, began looking around for a replacement to the true indigo and found. They found Baptisia australis grows from Canada down to the southern states and across the U.S. as far as Texas. The Cherokee used it as a blue dye, so this was the best the colonists could do. Sadly, it wasn’t the same deep blue that could be obtained with true indigo, thus the common name we would come to know, false blue indigo.

It appears that many were unhappy with the compromise and missed the deep-blue dye of India. There are written records as early as 1649 demonstrating that one person or another had decided they were going to get rich importing true indigo, starting up a plantation and trading dye. Because we see no evidence of the resulting goods, it appears that the introduction of the plant failed until much later, when plant dyes were no longer a necessity. Baptisia australis was as good as it was going to get, and the color blue was so important that it became America’s first subsidized crop.

A Story Forgotten
The use of false blue indigo as a dye has pretty well gone out of fashion, as has the common use of its medicinal benefits. False blue indigo was traditionally used for its antibiotic, antiseptic and anti-inflammatory properties. Today, it’s believed to be mildly toxic depending on who you ask, so it is best to use it only under the care of an experienced practitioner.

For me, I’m excited to invite a plant into my landscape with such an important place in our history. It’s beautiful blue, pea-family blooms will not cease to remind me of the blue dye that connected the history of the Cherokee and the colonists.

Planting False Blue Indigo
If you plant one, be prepared to wait a couple years until it really gets going. Baptisia likes to get its roots well established before developing too much above ground. A very wise plant—we should all take note.

Michael Johnson of Scioto Gardens here in Delaware, Ohio, (check out my tour of the nursery in the video above) tells me it doesn’t like to be split or moved. It prefers full sun and mildly acid soils, but seems to be just fine here in Ohio where our limestone soils tend more toward the alkaline.

What a great reminder that the plants have stories to tell us—they are living witnesses to our past and can remind us of who we are and where we come from!

« More of the Prescription Gardener»