My wife and I went out for lunch the other day to a restaurant that serves local Ligurian specialties. The key dish was farinata. 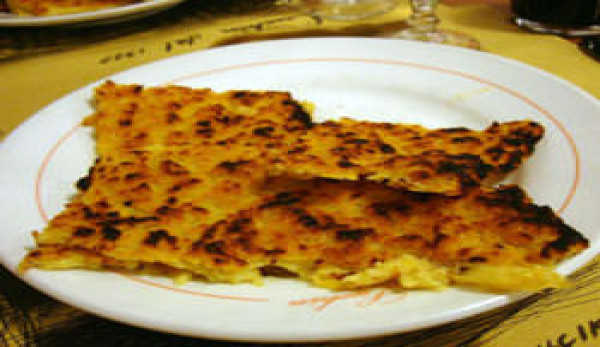 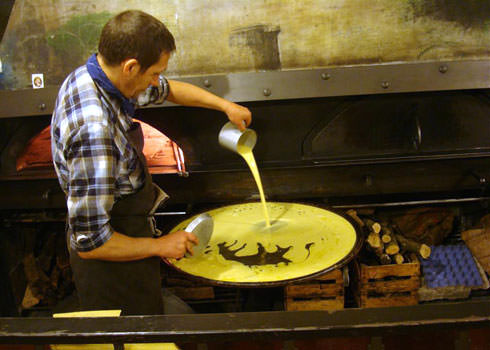 There’s a high demand for farinata in restaurants here, and waiting for your order can be extensive.

My wife and I went out for lunch the other day to a restaurant that serves local Ligurian specialties. The key dish was farinata, which tastes like a cross between a pancake and crunchy hash-brown potatoes. The dough is a liquid that is poured into a big, shallow, steel pan and then cooked inside a large brick stove with a wood fire inside. (These big, brick stoves are also the way wood-fired pizza is cooked.)Â

It was a cold and drizzly day, so sitting inside in front of the stove was really comfortable, and the farinata cookâ€™s routine was interesting to watch. The pan had to be rotated a few times and the cook used long rods with flattened ends to stick under the pan and twirl it around. Once the mix was cooked and burned to just the right extent, the pan was removed from the stove and the farinata was cut up into squares and strips.Â 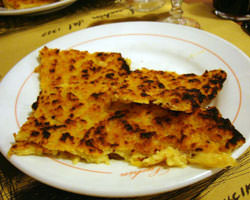 Farinata are made simply with garbanzo-bean flour and water.

The whole process takes about 15 minutes, and usually a large group of people is waiting for their portions. Ordering farinata at a restaurant can require patience, as there may be so many people ahead of you in line that you need to wait a half hour until your turn arrives. Luckily, we ate lunch a bit early and the farinata rush hadnâ€™t yet started â€” we got our servings from the first pan out of the oven.

Some people do make farinata at home, but itâ€™s difficult to get the correct level of crunchiness in an oven. The recipe is really simple, basically just garbanzo-bean flour mixed with water.

Garbanzo beans, called cece (cheh-chee) are one of the old foods of the poor people here in Liguria, and a lot of simple peasant recipes, like panissa (fried farinata, served with onions), use them. Iâ€™ve never grown garbanzo beans, because Iâ€™m not generally crazy for them, and also because they have the reputation of not yielding well. Still, it is a crop that grows in relatively hostile conditions. Before Columbus brought back beans, garbanzo beans were the main legume crop in the Old World. Garbanzos are still prominent in Indian cooking, being a key ingredient of hummus and falafel.

Iâ€™m amused at the recipes for farinata that advise people to soak the flour overnight before making it. This advice is given because there are often a lot of insect parts and debris in garbanzo flour, so soaking overnight allows the insects and scum to be scooped off before the mix is put in the cooking pan. The cook in the restaurant was also scooping scum off the top of his big pot of dough â€¦ but then he plunged his hands elbow-deep into the mix in order to stir it up.Â Â Â