A sweet treat sets these goat farmers apart from the competition. 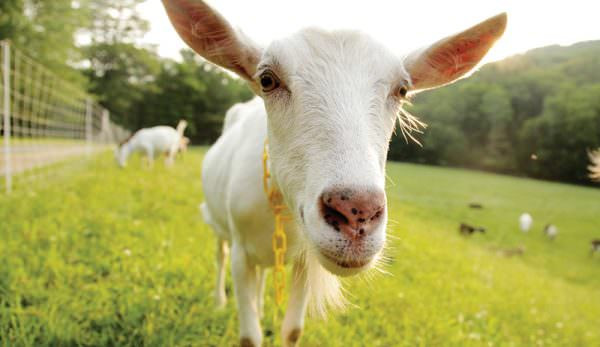 When Louisa Conrad and Lucas Farrell began interning on a dairy farm, they expected it to be a valuable experience, but they had no idea that farming would eventually become their way of life. Working as teachers, they found themselves with a gap in their schedules when the economy took a turn for the worse in 2008, and they decided to become students themselves at Blue Ledge Farm in Salisbury, Vermont. It was there that they became hooked on goats.

In the fall of 2010, they began work at Peaked Mountain Farm, a sheep dairy, where they were able to bring three of their own goats. Although cheese initially brought Conrad and Farrell to dairy farming, they realized that they needed a way to differentiate themselves from other cheesemakers, so they came up with a product that would set them apart: goatās milk caramels. Slowly, they began selling their caramels and cheeses at farmers markets, online and eventually in brick-and-mortar stores while buying Peaked Mountain Farm piece by piece as the owners retired.

Today, the renamed Big Picture Farm is home to 40 Saanen, Alpine and Nubian goats that forage on fresh pastures after every milking. Conrad and Farrell are as enamored with goats as they were when they first started farming.

āThey are smarter and have far more personality than sheep,ā Conrad says. āThey are just goofy and make you smile all the time.ā

Although they find that goats do indeed earn their reputation for mischievousness, Conrad and Farrell wouldnāt have it any other way because, as they put it, āGoats are truly the coolest.ā

Making the farm financially sustainable was a huge milestone for us. Once we got there, it was really important for us to pay our employees living wages, and that was also exciting to be able to do. Ultimately, though, we do what we do to ensure that our goats live the healthiest, happiest lives possible, and it has been extremely rewarding to watch this happen. During our first year on the farm, the goats lived in the chicken coopāthe sheep were using the barnsāand I promised our first two goats, Orion and Fern, that someday they would have some serious digs. Now, they browse on more than 130 acres and have a barn and several lean-tos to pick from for their nighttime rest.

Farming! When you farm on the small scale that we doāwe milk 35 doesāitās very difficult to compete with any type of commodity milk. We feel lucky for the support that our customers give us, and in doing so, theyāre acknowledging the extra hard work that goes into creating fresh, raw, creamy milk from a set of pastured and happy animals. It surely isnāt the easy way to do things, but itās the only way in our minds.

Focus. When we first started farming we wanted to do everythingāthe whole gamut of animals and vegetables and baking and farmers markets and wholesale. Itās tempting to have your fingers in all the honey pots at once. However, we quickly learned it was really expensive to do so. It was important for us to scale one thingĀ­āour goatās milk caramel businessāand put all of our energies there. That allowed us to really focus on the efficiencies and scale of that part of the farm to make it financially sustainable. Once that became steady, it was possible to add back in all the other elements of the farmāthe orchards and gardens and bees and chickens and pigsāthat we do on a homestead scale. They are important to our lifestyle and happiness, but weāre realistic that the dairy and the caramels are supporting them.