Large amounts of snow can have adverse effects on the roofs of farm buildings. Installing seasonal structural supports can help reduce the risk of collapse. 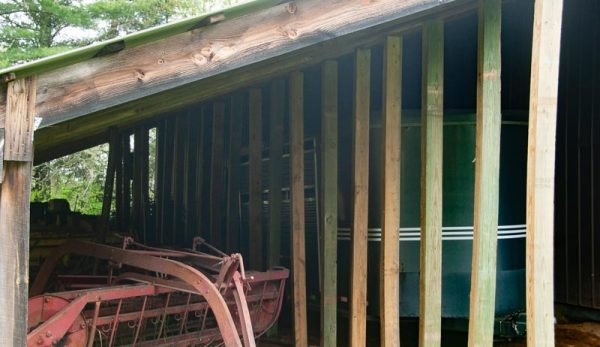 If you live in a part of the country that doesnâ€™t receive much annual snowfall, youâ€™ve probably never pondered how much snow weighs, and how great quantities of snow can have adverse effects on the roofs of farm buildings.

Weâ€™re not talking about a thin coating of fluffy dry snow. Weâ€™re talking about the accumulation of heavy wet snow and ice over the course of a long winter. This can quickly build up on rooftops if not consistently removed. Over time, this layer can grow thicker and thicker (and heavier and heavier) until it causes a roof to sag orâ€”worseâ€”collapse.

(Don’t) Do the Collapse

A collapsed roof is the last thing a farmer needs in the middle of a challenging winter. Taking precautions to avoid this possibility is important.

The winter of 2018-19 was a difficult one in northern Wisconsin. February saw 35 inches of snowfall during the first two weeks of the month. I did my best to reduce the loads on roofs (a specialty snow-clearing tool worked reasonably well). But one roof in particularâ€”a wide lean-to structure built on the back of a barnâ€”seemed to be strained by the snow.

Since the lean-to serves as the winter parking place for the majority of the farm tractors and machinery, the possibility of the roof collapsing on the equipment was unacceptable. My father, formerly a carpenter working in construction, reduced the concern by installing a series of sturdy 4×6 posts underneath the roof. These reached vertically from the rafters down the ground.

The rafters were placed down the middle of the roof, providing extra support suitable for the width of the structure.

Since then, putting up and taking down the 4x6s has become a twice-annual exercise. In the fall, theyâ€™re propped up underneath the rafters and held in place using short blocks of wood and a few screws.

With a row of 4x6s running down the center of the lean-to, access to the stored equipment is compromised, but thatâ€™s okay. We have no use for hay equipment in the dead of winter. And the lean-to is wide enough so even with the 4x6s installed, thereâ€™s enough room for the tractors to drive in and out of either end as needed.

Read more: Which is right for you, a square or round hay baler?

So whatâ€™s the takeaway here? Sometimes, roofs (especially farm roofs) need a little extra support during heavy snow. But this support doesnâ€™t necessarily have to come in the form of permanent structural enhancements.

My father already had the 4x6s, blocks of wood and screws on hand. So installing the support posts couldnâ€™t have been simpler. In a pinch, a quick and seasonal solution can do the job just fine.

One final note. It goes without saying that care should be taken when working underneath any roof with a heavy snow load. In my case, my father knows roofs and rafters like the back of his hand.

But if youâ€™re concerned about snow loads, consulting an expert can help determine if a seasonal solution like the one Iâ€™ve outlined is suitable and safe for your needs, or if more in-depth modifications are needed.