Farm Shiitake Mushrooms in the Forest

Begin your transition into agroforestry by growing shiitake mushrooms on logs on your farm’s forestland. 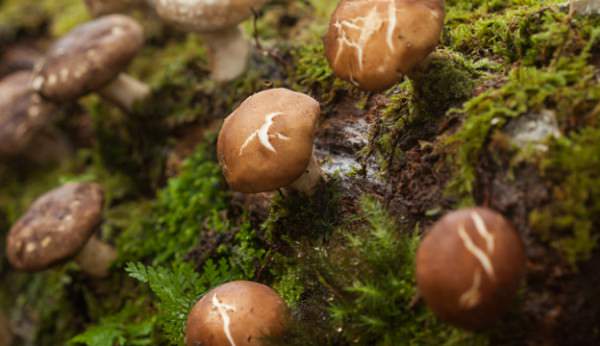 If you’re looking for a way to increase the profitability of your forestland—and logging for timber isn’t your thing—you might want to entertain the idea of farming fungi.

“Mushrooms are the gateway to agroforestry,” says Steve Gabriel, extension aide at the Cornell Cooperative Extension, who, along with his colleagues, has been studying shiitake cultivation as an agroforestry crop in New England. “It’s an easy entry point, as you can inoculate a lot of logs for a low cost, but it’s just the beginning of potential crops.”

The practice of forest-raised mushrooms is fairly new in the U.S., and one that brings a pretty penny at market. Research from Cornell University in 2012 shows that shiitakes harvested from outdoor inoculated logs earn about twice that of their indoor counterparts, which are grown on synthetic materials in climate-controlled spaces. Participating farmers in Cornell’s shiitake-cultivation study received $10 to $12 per pound wholesale and $12 to $16 per pound retail in the northeastern U.S. Currently, there’s no reliable data on other mushrooms, Gabriel says. That’s because shiitakes are the most reliably cultivated mushrooms, though Cornell also recommends oyster (Pleurotus ostreatus), lion’s mane (Hericium spp.) and winecap stropharia (Stropharia rugoso-annulata) for forest-grown success, and the extension is working to find others.

But while it’s easy to get focused on numbers and dollar signs, an overlying tenet of agroforestry is putting the health of the forest above your production goals. Gabriel offers these tips for growing your burgeoning mushroom business in a way that leads to long-term forest health:

Place the inoculated mushroom logs in a place that avoids stream banks and fragile or unique species, which could be damaged as a result.

“It’s easy to spread out in the forest,” Gabriel says, “but we’re working to use as little space as possible.” By stacking and moving logs in ways that increase production efficiency, you also minimize the impact you have on the forest through compaction.

Siting your mushrooms in the back 40 means your body and harvesting equipment have the potential to do major forest damage. Marking clear paths that you always use when traveling to and from the mushroom yard minimizes harm to the forest.

Allow forest debris and spent mushroom logs to remain in the forest to decompose. This not only nurtures forest biodiversity, it creates a natural habitat for mushrooms.

In addition to cultivating mushrooms, some forest owners practice wildcrafting, in which they harvest wild-grown mushrooms. In this case, Gabriel recommends only harvesting up to one-third of the patch so it can reproduce. Farmers in the Czech Republic have even experimented with wild-mushroom cultivation by tying burlap sacks full of mushrooms in trees so the wind will blow around the spores and increase production, Gabriel says, but this isn’t necessarily a viable means of production.

“The fungal world is not a cause-and-effect type of relationship,” he says, noting that certain mushrooms grow in highly specific conditions. “There are so many levels of complications and misunderstandings of how they work. It’s hard to guarantee you’ll get any mushrooms unless you cultivate them yourself.”

Warning: Successfully growing and marketing forest-grown mushrooms could lead you to other agroforestry endeavors, as Gabriel can attest.

“Now that I’m in the woods growing mushrooms, I keep asking myself what else I can grow,” he says. “I keep adding other species as time and space allows. People should keep in mind that [mushrooms are] just the beginning.”