“Farm Teams” Take On A New Meaning In Baseball

Major League Baseball teams are looking at adding gardens to their ballparks in a new trend that aims to improve sustainability. 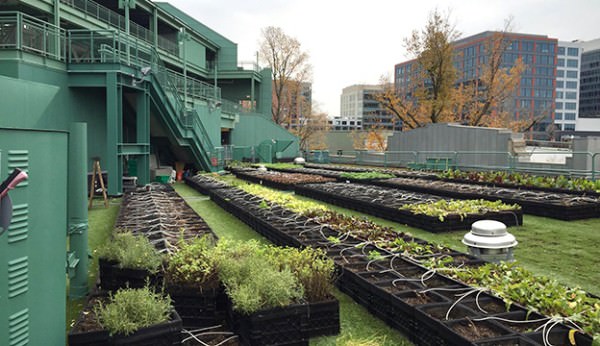 When you think of food at a baseball stadium, chances are the items that first come to mind are hot dogs, peanuts and crackerjacks. “Take Me Out to the Ball Game” assures us of this. In recent years, however, the practice of growing food at a ballpark has been embraced by five MLB teams. What started as a way to change the karma at Fenway and get the Red Sox their first World Series win since 1918 (they succeeded in doing so in 2004), has become an effort in park sustainability.

So far, baseball fans have welcomed the trend.”The reaction is incredibly positive,” Jessie Banhazl, Green City Growers founder, told ThinkProgress. “People are really excited to see this particular area of the park that was not being used for anything all of the sudden being a thriving farm.”

Banhazl and team at Green City Growers pitched the idea of an urban farm inside a major league ballpark to Linda Pizzuti Henry, Red Sox co-owner John Henry’s wife. Henry had already been thinking of turning Fenway Park’s rooftop space behind Gate A into an urban farm to bring healthy eating and sustainability to the stadium. The space is now being dubbed “Fenway Farms,” ThinkProgress reports.”We were very lucky to have been picked to be the Red Sox’s other farm team,” Banhazl joked.

Integrating farms into ballparks is not the sole project of the Boston Red Sox. In 2011, the San Diego Padres had hot peppers and tomatoes planted at Petco Park. Currently the crop depends on the season and includes everything from avocados to blueberries, ThinkProgress reports. The food is used in items sold at the park, including salsas. A couple seasons later two other MLB teams opened gardens in their ballparks, which included the Garden planted at the Colorado Rockies’ Coors Field. Later, in 2013, the San Francisco Giants announced plans for an edible garden at AT&T Park. President Obama said that “With rows of kale and strawberries and eggplant, the Giants are going to help encourage local youth to eat healthy—even at the ballpark,” according to ThinkProgress. At 4,320 square feet, it was the largest baseball stadium garden to date. Fenway Farms has exceeded it at 5,000 square feet. The Washington Nationals are announced their plans for a garden as well.

Green Sports Alliance resource specialist Alice Henry told ThinkProgress that the gardens, “really connects these teams with their communities, and reinforces their commitment to these hugely important issues. The food that is served at venues, to millions of fans, is a way for iconic sports teams to teach their communities about where their food is coming from, and why that’s important for the health or their communities, each individual fan, and the health of our agricultural system as a whole.”

Do you think more Major League Baseball teams will follow suit? Do you think all of them should