I Discover a Mystery Christmas Present From My Late Grandpa

I found a strange metal object at the base of a tree. I later learned it was more significant than one hobby farmer could have ever guessed. 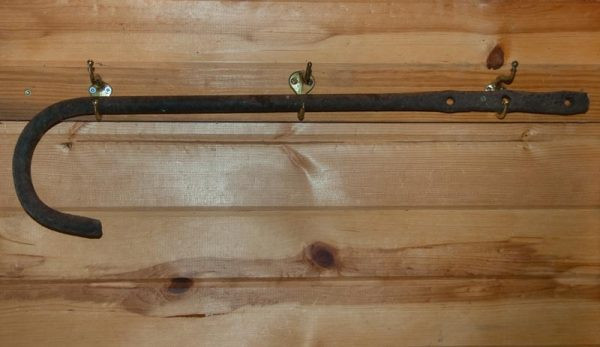 My grandfather certainly left his mark on our farm, and his influence can still be seen from the clothesline out back to the drainage pipe in our driveway. I still use some of his old tools, and the name he gave our John Deere Model 40â€”â€śLittle Moâ€ťâ€”has stuck to this day.

But certainly the pinnacle of his farming pursuits was his masterful demolition of an old ramshackle shed near the barn. He pulled out all the stops to disassemble, clean up and haul away the shed. He even ripped off an entire wall with Little Mo. (We have that on videoâ€”how techy we were in the 1990s.)

Earlier this summerâ€”20 years after the demolition of the shedâ€”I was out mowing and trimming weeds around the now-vacant area where the shed used to stand. I was paying particular attention to trimming weeds around a large black ash tree in the barnyard. Thatâ€™s when I noticed a piece of metal sticking out of the ground at the base of the trunk.

Pulling it free, I discovered that it was a strange object about two feet long. It was shaped like a candy cane with the straight end tapered so it was flat with three holes bored through.

At the time, I pondered its intended use. I joked that it could have served as a walking cane if it had been a bit longer.

I also wondered who had left it there at the base of the tree, and when.

The Cane That Wasn’t

Fast-forward to this December. I happened to stumble across a video of Grandpa during the demolition and cleanup of the shed. While discussing the project, Grandpa walked over to one of the remaining walls, grabbed something he had hung on a board, and showed it to the camera.

To my surprise and delight, it was the little metal walking cane.

Grandpa proceeded to explain, tongue-in-cheek, that the cane was the only tool heâ€™d been given to tear down the shed (not true). But he did explain how he used it for picking through the debris. Then he jokingly wondered what it even wasâ€”apparently, he didnâ€™t know either.

But I guess I share his sense of humor, because he then tested the object as a walking cane. I chuckled because it was too short for practical use.

In the video I didn’t see Grandpa leave the walking cane against the black ash tree. But because he was literally standing in front of the tree while talking to the camera, I think itâ€™s safe to conclude he’s the one who left it there 20 years ago.

When I found the walking cane this summer, I saved it. I thought it was an unusual piece of history and something I could put to use in an odd way at some point.

Now, seeing that Grandpa used it during one of the farmâ€™s best-remembered demo projects, Iâ€™ll definitely keep it. Because it was tucked away all these years, just waiting to be found, Iâ€™ll consider it a Christmas present from Grandpa.

If anyone has any idea what the object is, feel free to let me know.