Farmers Market With Beer in Mind 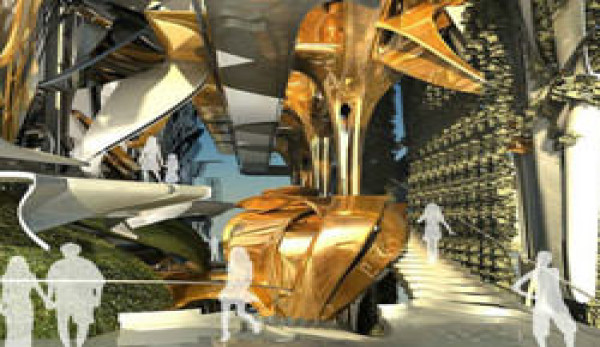 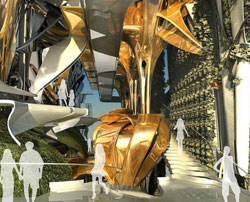 Claiming third place in the Famers’ Market Competition, Beer Hops Farm Brewerymarket features a design that was inspired by the hop plant.

Denver is as famous for its breweries as much as its Rocky Mountains, so the idea behind the design brings that element into the forefront. The proposed entrance is near the Colorado Convention Center, where the largest beer festival in the U.S., the American Beer Festival, is held.

The urban layout also has sustainability in mind. From the retractable roof membrane, where rain water is collected and reused for the lower-level brewery and hops-farm facade, to its vertical garden, this contemporary plan offers the experience of walking through a garden while also adding a enhancing element to Denver’s historic West Highland neighborhood. The folding roof canopy increases its heat exchange by dissipating heat at night, helping condensation, which is then channeled to funnels that drain into a collection area. Requirements for the contest were: making and providing flexible vending market “bins”, loading access from an alley, open air space, an enclosed community/activities room/small office area, bathrooms, storage, security and marketing identity. Being next to a single-story structure in a city that receives an average of 60 inches of snowfall each year also made the competition challenging.

The adjustable vending bins were inspired by observing the natural properties of the hop plant, one of three main ingredients in beer production. Hops are harvested from “hop poles” on the facade as well as hops lining the interior.