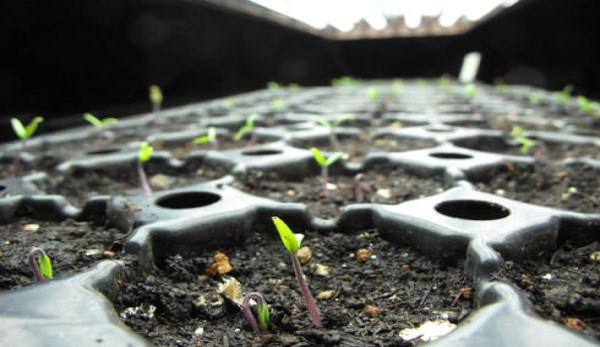 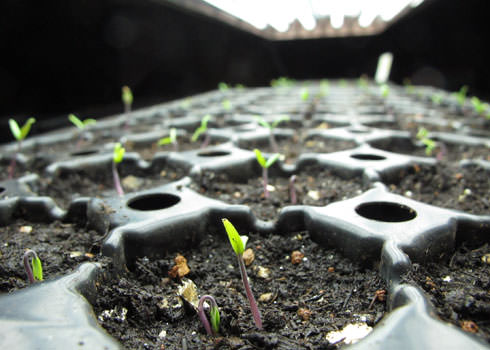 The urban farmers at Farming Up are starting their operation with Green Zebra tomatoes and Sweet Valentine lettuce, which are just begging to be transplanted, Alec Baxt says.

As urban farming proliferates, I’m in touch with more inspiring and innovative farmers starting from the ground up, so to speak.

With any luck, he’ll be sky farming 2 acres on a Brooklyn rooftop in 2012. This year he’s piloting the project on the roof of a building in the Gowanus section of Brooklyn.

The goal of Farming Up is not only to grow and feed the neighborhood but also to increase the nutritional density of produce with soil improvements. He wants to fine-tune the rooftop mix to maximize the nutrition in the bursting bounty. He’ll study the role of compost and the re-mineralization of the soil. Brooklyn College students will also be looking into the water that leaches out of his growing system. The study will provide some interesting information regarding the amount of minerals that will need to be put back into the system every year. 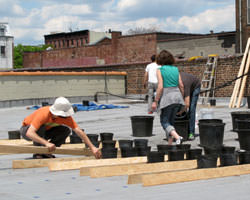 Twenty volunteers helped with the trial installation of Farming Up, moving all the supplies to the third-story rooftop.

Alec started at the Brooklyn Botanical Gardens as a certified arborist and farmed some, both independently in Ohio and at Stone Barns Center for Agriculture in nearby Pocantico Hills, N.Y. His quest for the “sweet spot for a broad array of vegetables” builds on the work William Albrecht began for the Missouri Extension Service in the 1920s. Not only will he test the soil, but he also will follow up with nutritional testing of his produce through the USDA food laboratory at Cornell University.

He’ll begin growing with Green Zebra tomatoes, Sweet Valentine lettuce, Detroit Dark Red beet and Lacinato kale, each of which represents a different family of vegetables. He’ll sell the surplus tomatoes to the Brooklyn  farm-to-table restaurant, The Grocery. In fact, he picked Green Zebra tomatoes because they were recommended by one of the buyers at Blue Hill, the influential restaurant located at Stone Barns.

“I eat the tomatoes like apples, right off the plant, and I love them sliced on Italian bread, drizzled with some balsamic and olive oil,” Alec raves.

“When it comes down to it, this study is entirely about nutrition,” he says. “We talk a lot about all the processed junk in our diets, but we don’t hear much about the decreasing quality of the ‘good’ things that we’re supposed to eat. That wives’ tale about needing to eat five apples today to get the nutrition from an apple of a generation ago turns out not to be a wives tale after all. There has been a steady decline in the nutrition of our food crops over the past 60 years.”

Alec is aiming to feed the people who live walking distance from the farm in Brooklyn. He feels the farm can influence people toward better food choices and growers toward better practices. Even if his work represents a miniscule portion of NYC’s food needs, he feels it has implications for agricultural reform, environmental concerns and for our health.

“It’s also been incredibly fun,” Alec adds. “I wanted to look at what it would take to launch a large urban farm in NYC. When I couldn’t come up with any information regarding nutrition, I decided to figure it out for myself. The fun has been in the tremendous amount of learning involved—everything from green-roof systems and combined sewer overflow, to soil and nutrition dynamics, biochar, and entrepreneurship.”