The cuddly Faverolles chicken breed has great dual-purpose qualities and can be trusted around children. 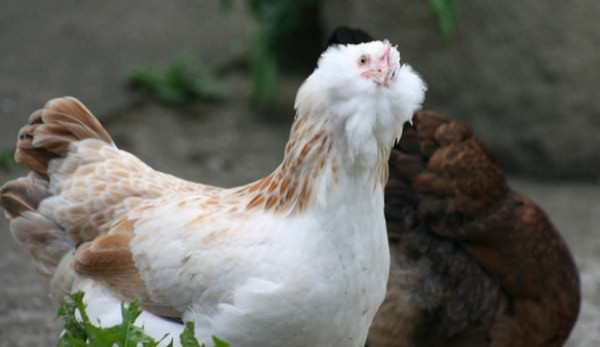 Use: The cuddly Faverolles chicken breed has great dual-purpose qualities and can be trusted around children. Broodiness varies among hens, but each will produce approximately 200 tinted eggs yearly.

History: There is some uncertainty as to the bloodline of the Faverolles. The chicken breed was developed during the early 19th century in the French village of Faverolles as a dual-purpose breed that would produce eggs year round. Experts speculate that the breed is a result of crossing Dorking chickens and Houdan chickens with an Asiatic chicken breed, possibly the Brahma or Cochin. Others argue that the cross involved a five-toed chicken, similar to the Dorking, with Belgiumâ€™s Malines and possibly a Brahma. In 1886, a distinct, consistent Faverolles chicken emerged. The breed was accepted into the American Poultry Associationâ€™s Standard of Perfection in 1914 (salmon variety) and 1981 (white variety).

Conformation: The Faverolles chicken is a heavy bird with a deep, elongated build, evidence of breeding for table purposes. The APA recognizes two color varieties: Salmon and White. The breedâ€™s distinct features include lightly feathered legs, a beard and muffs, and five toes. Its shanks are a pinkish-white, and its single comb is upright and medium-sized. The muff hides the breedâ€™s small wattles and oblong earlobes. All are bright red. Standard Faverolles cocks weigh 8 pounds and hens weigh 6Â˝ pounds; bantam cocks weigh 34 ounces and bantam hens weigh 32 ounces.

Special Considerations/Notes: The Faverolles chicken breed is an excellent dual-purpose choice for hobby and urban farmers and children. It is very friendly and will become affectionate toward its keepers. Although the breed has a curious and active nature, farmers with gardens need only a short fence to keep the Faverolles from exploring. Faverolles chickens grow quickly and can become fat easily, so it is important to monitor food intake. The breed is listed in the Threatened category of the American Livestock Breeds Conservancyâ€™s Conservation Priority List.