Feasting On Chocolate At The Mackinac Island Fudge Festival

Every August, Mackinac Island, Mich., hosts a Fudge Festival to celebrate one of the many treats nearly all its visitors taste, if not also leave the island with. 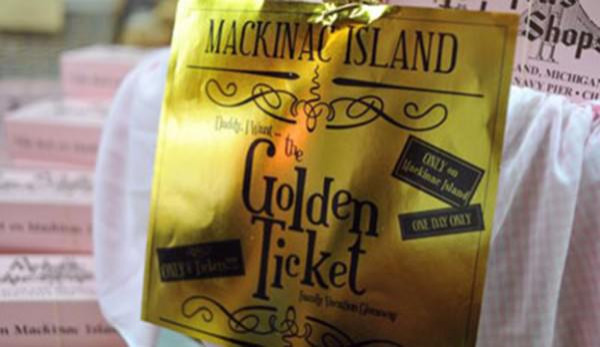 Every August, Mackinac Island, Mich., hosts a Fudge Festival to celebrate one of the many treats nearly all its visitors taste, if not also leave the island with. Fudge there comes in small boxes and is sold by the pound and half pound. We, along with our son, arrived off Shepler’s Ferry just in time for the event-filled day, which culminated in a delicious, fudge-inspired feast at The Cudahy Chophouse.

Because most visitors to the island will hop on a bicycle at some point during their visit or stay, why not see who can pedal the slowest in the Great Turtle Slow Ride held at Windermere Point at the edge of bustling downtown. The 8-mile loop around the island is a great way to work off some of the calories from any fudge sampled, many of the locals say.

Great Turtle Toys orchestrated the Great Kite Ascension, also held at Windermere Point. By this point, we were getting pretty hungry for a taste of Mackinac Island fudge, the most popular in the nation, so we did what most “fudgies” (fudge fanatics) do: sample some of the many flavors at the numerous fudge shops downtownâ€”there’s about one shop every 100 feet.

Madelyn Le PageÂ purchased a box of fudge with one of the Golden Tickets, which entitled her to a return two-night stay on Mackinac Island for four people. Each of the six participating fudge shops (most of which have more than one storefront), had one of the seven Golden Tickets that were placed inside specially-designated boxes of fudge only offered for sale during the Golden Ticket event. Chances of winning a Golden Ticket are 1 in 40 at each location, so some fudgies purchased more than one box. The various prize vacation packages included island stays at the Mission Point Resort, Grand Hotel, Island House Hotel and Chippewa Hotel.

Even the 2013 Michigan Sugar Queen, Victoria Hudgins, was on hand to award the hotel packages to the winning ticket holders. While waiting for the Golden Ticket winners to be announced, we caught her watching the ferries come and go from the island’s idyllic harbor with Fort Mackinac and victorian cottages and mansions stretching along both bluffs overlooking the town.

For us, however, the climax of the Mackinac Island Fudge Festival was dinner at the Cudahy Chophouse, where a fudge-inspired dinner awaited us. The restaurant is located inside the Inn at Stonecliffe, a magnificent estate about 2 forested miles outside the busy downtown. We enjoyed a leisurely walk to dine there, but most folks opt for a horse-drawn carriage taxiâ€”or hopped on their bikes.

Widely acclaimed Michigan-based folk musician, Audra Kubat, serenaded us as we grabbed a table outside overlooking the Mackinac Bridge, just as the sun started to drop over the Straits of Mackinac.

With a poof of surprising smoke rising as Lisa opened a Ball mason canning jar, the chicken satay treat insideÂ came with some saffron rice and a mildly spicy chocolate dipping sauce in the spoon.

Chef Richard Gilles called this complimentary appetizer an “amuse.â€ť “The flavors should amuse your mouth,” he says. The wood used as the plate was made from a tree that had been struck by lightening on the property.

Of course Chef Gilles didn’t forget about chocolate on the dessert menu; he just wouldn’t settle for the same old standard sweet. Instead, we savored a creative spin on a campfire staple with his S’more Bread Pudding with a crĂ¨me de menthe sauce and graham cracker sprinkles.

Chef Gilles’ Chocolate Curry Chicken with Saffron Rice was tender, flavorful and, with the fudge-inspired sauce, pure decadence. Fortunately for us, he was willing to share his recipe below!

Check back next week when we share a fudge recipe you can make in your own farmstead kitchen!

Chicken Glaze
Combine all glaze ingredients in a sauce pot and bring to a simmer to combine the flavors.

Chocolate Sauce
Combine water, sugar and corn syrup in a saucepan. Bring to boil and remove from heat.

Add enough of the syrup to the cocoa powder to make a soft paste, stirring until the mixture is completely smooth. Gradually add the remaining syrup to the paste. Add the melted chocolate, and stir until combined. Keep warm until service.

Combine seasonings and onions and rub all over chicken. Marinade for 5 minutes.

In a hot skillet, sear chicken breasts in olive oil until golden.

Place chicken in baking pan and cover with chicken glaze. Bake until done (internal temperature of at least 165 degrees).

Ladle chocolate sauce over chicken and serve with basmati rice.