Feather Loss in Chickens? It Might Not Be Molting

Broodiness, parasites and roosters, along with molting, can cause feather loss in hens. Learn how to identify the cause and take appropriate action. 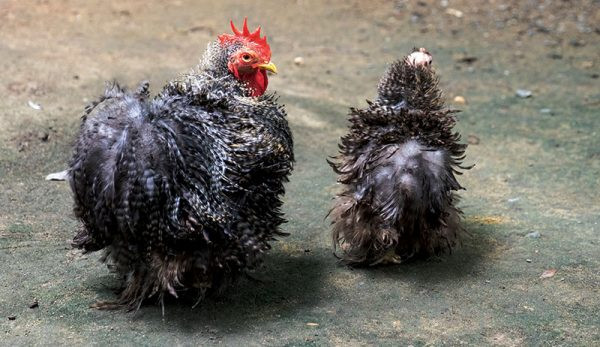 Q: My chickens have lost a lot of feathers recently and have several bald spots. I changed their diet from corn to pellets/feather fixer to help with molting, but all their feathers still havenâ€™t grown back. What’s causing this feather loss? What can I do to get them back to normal?

A: Chickens losing feathers can be attributed to several things, not just molting, and the cause can usually be identified by looking at where the feather loss is. If your hens have lost their breast feathers, they are probably broody. This means that they are literally feathering their nest in preparation for sitting on eggs and hatching chicks.

If the feather loss is around the vent area, you might be dealing with mites or another external parasite. Check the area (and also under the wings) after dark using a flashlight for any crawling insects on your chickens. If you find some, then you will need to treat the birds. (For more information on treating your flock for external parasites, read Get These Pests Out of the Chicken Coop.)

If the feather loss appears only on the hens and is concentrated on their lower backs and wings, possibly with some around the backs of the heads, thatâ€™s probably rooster damage from overmating. The rooster rips out the henâ€™s feathers with his claws. Separating him for a while to let the hens grow back their feathers is a good idea, or you can put â€śsaddlesâ€ť on them, which are basically pieces of cloth that protect their backs.

If one chicken seems to be suffering the majority of the feather loss, and itâ€™s around her head or vent area, you might have a bully in your flock. Identifying and removing the bully for a few days can help. Note: The breeds with beards and muffs such as Ameraucanas, Easter Eggers and Faverolles seem to be the most common victims of feather pulling.

If itâ€™s fall and the feather loss started around the head and neck area and is moving down the body fairly evenly toward the tail, then your flock is probably molting. Molting is the annual feather loss chickens undergo to grow in nice new feathers before winter, and itâ€™s completely normal.

Regardless of the cause of the feather loss, feeding your chickens a balanced diet will help with regrowth. Corn isnâ€™t a complete feed for chickens. Instead, I recommend a high quality layer feed year-round, supplemented with some protein-rich treats such as sunflower seeds, meat scraps, scrambled eggs, mealworms or other insects as well as access to plenty of grass, weeds and herbs.

Some people like to feed their flock a grower feed, for example, in the fall during the molting season, because it contains a bit more protein than a regular layer feed. If you do that, be sure to provide free-choice oyster shell or crushed eggshells to your flock because grower feed doesnâ€™t include added calcium, which chickens need to lay eggs. (As an aside, chickens donâ€™t lay eggs while they are molting.)

Q: We have had a few field mice around our garden and chicken coop. I saw a chicken catch and eat one of the mice. We have also put out poison around the coop and garden to control the mice. If the chickens eat the mice, does this hurt/harm the chickens in any way or the eggs we eat?

A: Itâ€™s often a surprise to new chicken keepers that their flock will eat mice, but considering that chickens are omnivores, they will eat a mouse, a small lizard or a frog as soon as they will eat grass or other plant material. I never recommend using any type of poison to get rid of rodents or insects on my property for this very reason. Your concern is a valid one. Wildlife rehabilatators often see cases of owls dying from eating a mouse or rat that has eaten poison. I would imagine that a chicken would also suffer that same fate.

A better way to control mice around a coop is to clean up spilled feed, and donâ€™t leave feed out overnight. Cover the feeder or put it away. And be sure to clean up any kitchen scraps the chickens havenâ€™t eaten by dark. Once you remove the food source, the mice should move on.

If you see snakes around, donâ€™t be too quick to kill them. As long as the snake isnâ€™t venomous and a threat to your family or other pets, the snake will probably clear out the mouse population for you in short order.

Getting a cat is also a great way to control rodents. Many dog breeds will also chase and catch mice for you, too.

Finally, consider planting some herbs in the area. Some people, myself included, believe that planting mint around your coop and run will help to deter mice and make your coop and run area less attractive to them. The mint should also help keep flies and other insects away.

Email your poultry-related questions to Lisa Steele at chickens@chickensmagazine.com, with â€śFlock Talkâ€ť as the subject line.