Every breed has its unique characteristics, but know what you're getting when raising pigs for market pork. 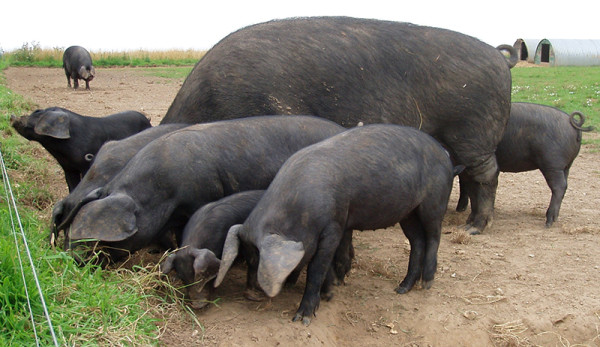 Upon entry into the pig-purchasing arena, todayâ€™s new and prospective hog farmers are met with a kid-in-candy-store scenario: The slow food movement, along with a surge of interest in heritage breeds, has made buying starter pigs a venture worthy of some study and forethought.

Some years back, we came upon the opportunity to acquire a litter of Large Black piglets. Large blacks are firmly a heritage breed, defined loosely as a breed fallen out of favor with producers over the years but of interest to farmers and customers for their pasturing and foraging abilities, distinct flavor profiles, and general preservation. Which is to say theyâ€™re differentâ€”and the opportunity to raise up uncommon animals prompted us to buy all five and a Gloucestershire Old Spots (an even rarer pig that slipped onto the endangered list at one point) to boot. We grew our uncommon hogs out on a ration of high-protein, hand-mixed feed, reveling all the while in the sight of our uncommon animals lazily occupying the pastures we rotated them between. To our minds, the extra effort was sure to pay off in some as-yet-unidentified manner.

So we were of course befuddled when the vacuum-packed cuts we received from our processor fell far short of the weight weâ€™d come to expect. And we were disappointed when customer feedback yielded such comments as, â€śThat little pork chop sure was fatty.â€ť

And this is how we learned the all-important first lesson in our lifelong education on the sprawling topic of feed conversion efficiency: Pigs can loosely be lumped into two classes, bacon pigs and lard pigs, and unawares, weâ€™d raised up a litter of the latter.

Feed conversion efficiency is something of an unwieldy topic, full of numerous interconnecting factors, but the basic concept is simple: When a pig eats, the resulting muscle gain roughly determines the feed conversion efficiency. If a pig requires a lot of feed to gain muscle, the efficiency is low; less feed required to achieve muscle gain is high efficiency. And the key term here is â€śmuscleâ€ťâ€”if a pig converts feed into excessive fat (i.e., not meat), youâ€™ll leave the processor as unhappy as we were.

If you want to raise a herd of heritage pigs to keep a breed from extinction, feed conversion efficiency wonâ€™t be a primary concern for you. But if youâ€™re trying to manage costs and keep market profits in the black, bacon pigs are definitely the way to go, and you should stay away from lard pigs.

Hereâ€™s a quick breakdown of bacon pigs and lard pigs, though be aware each pig is its own animal: You can get a fat Yorkshire, just as Iâ€™m sure somebodyâ€™s raised a buff Large Black. However, generally speaking, hereâ€™s where a few popular breeds land on the bacon vs. lard pigÂ  spectrum of conversion-efficiency metrics.