If your chickens are laying thin eggs, they might need calcium in their diet. Free-choice feeding oyster shells is a good way to supplement calcium. When it comes to dining out, chickens have eclectic tastes. Worms squirming in the manure pile, dangling tomatoes and raspberries, and miniscule seeds all attract a hungry chicken’s sharp eyes. If […] 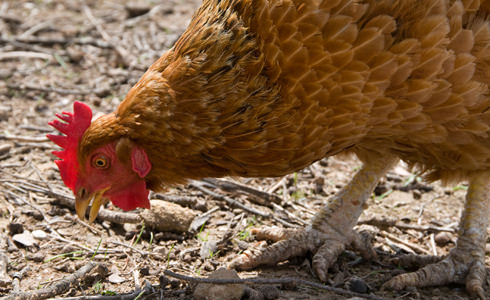 If your chickens are laying thin eggs, they might need calcium in their diet. Free-choice feeding oyster shells is a good way to supplement calcium.

When it comes to dining out, chickens have eclectic tastes. Worms squirming in the manure pile, dangling tomatoes and raspberries, and miniscule seeds all attract a hungry chicken’s sharp eyes. If allowed to roam free around the urban backyard, our domesticated birds will lead an omnivorous chicken lifestyle similar to that of their wild ancestor, the Red Jungle Fowl of Asia.

In the days before commercial chicken farming, small flocks on family homesteads mostly fended for themselves. As more chickens were relegated to chicken houses where foraging wasn’t an option, chicken feeding became a more complicated affair.

Even after commercial diets emerged on the scene in the early 1900s, meeting chickens’ nutritional needs posed a challenge. Birds suffered from deformities and illnesses caused by vitamin and mineral deficiencies, which underscores the importance of a chicken’s balanced diet with optimal amounts of protein, fat, carbohydrates, vitamins and minerals.

Fortunately, providing chickens with nutritional feed is easy nowadays. Head to your local feed or urban-farm-supply store and you’ll find commercial chicken feeds formulated especially for your chickens, whatever their age or purpose.

But beware of grabbing up any old bag that looks like chicken feed. A chicken’s nutritional needs change during different stages of its life. Newly-hatched chicks, for instance, require a starter feed with high levels of protein for growth—about 20 percent for egg layers and slightly more for meat chickens.

From 6 to 8 weeks on, the layer chicks, now called pullets, receive a somewhat lower protein “developer” feed, while broiler pullets usually get an aptly-named “finisher” feed until slaughter. (Keep in mind, not all feed stores carry these more specialized diets).

When egg production finally kicks in at around 20 weeks, hens will lay eggs every 24 to 26 hours if they are receiving the right nutrition and if they have a safe place to lay their eggs. Layer hens should be given a layer diet, which generally contains higher levels of calcium for egg production.

“A layer diet consisting of 16 percent protein is good for most areas,” says Kenneth Macklin, PhD, a research fellow at Auburn University’s Department of Poultry Science in Alabama. “However, one containing more protein [18 to 19 percent] will be needed to keep hens from going out of lay in areas that have hot summers. Chickens eat less when it’s hot out.”

Finding higher-protein feed can be difficult, but you can supplement layer feed with oyster shell.

But hold that credit card—you may have even more options. Spurred by increasing demand for pesticide- and antibiotic-free foods, certified organic feeds have come on the market.

Cheryl Clarke, a chicken raiser and zookeeper in Carnation, Wash., switched to feeding her chicken flock an organic feed because her chickens’ overall health seemed poor, and some of the chickens suffered from reproductive tumors. Since making the conversion to organic feed, she feels her chickens’ health, weight and plumage have improved.

Feed stores carry an assortment of other bagged and bulk grains, including scratch and even organic cracked corn or oats. Be aware that some chicken feeds, particularly chick starters and broiler chicken diets, are commonly medicated with antibiotics and coccidiostats, which are used for the control of a parasite called coccidia. Check the feed bag for feeding directions and withdrawal times.

Looking for a nutritious treat for your chickens? Try these recipes for Bird Bread and Bird Salad.Many experienced chicken raisers concoct their own chicken diets. However, Macklin recommends feeding a commercial corn/soy feed to laying chickens for a simple reason: The chicken feed already contains the proper nutrition.

“Mixing your own feed, though possible, takes some knowledge of the nutrient contents of each component to get the right mixture,” he says.

Because formulated chicken feeds already contain the vitamins and minerals chickens need, your flock should require little in the way of supplements. Chickens without access to sufficient natural grit, like tiny rocks or coarse sand, should be offered granite grit free-choice to help them grind hard seeds and grains in their gizzards. Supplementing a layer chicken diet with oyster shell, which provides extra calcium for egg production, won’t hurt your birds and may help if their diet is imbalanced, says Macklin.

Commercial chicken feeds are considered complete diets. Adding scratch grain mixtures and other foods to the feed isn’t necessary and could lead to health or productivity problems.

Many chicken raisers cut their feed bills somewhat by augmenting their flock’s formulated fare with leftovers from the kitchen. Chickens love greens, corn, berries, apples, cereal, bread and even cow’s milk. Just don’t overload them with goodies so they spurn their balanced feed. Avoid offering onions or garlic (which might taint egg flavor), raw potatoes, high-salt foods and anything spoiled or moldy.

In winter, Clarke provides her chickens with some extra carbohydrates in the form of scratch to help them stay warm.

Finally, never skimp on the most essential ingredient in a healthy diet: A constant supply of fresh, clean water. Like us, chickens are made up of lots of water (a whopping 55 to 75 percent); it also comprises more than half the volume of an egg. Water is essential for proper functioning of the digestive, metabolic and respiratory systems, so make sure your chicken flock has plenty to drink during hot spells. Give them extra containers if necessary and a source of unfrozen water on frigid winter days.

About the Author: Cherie Langlois is a Washington-based freelance writer and photographer. She has a small, mixed, laying flock of three Barred Rocks, two Buff Orpingtons and two Araucanas that run up to her house begging for whole wheat bread and apples every day!