Feeling Worm And Fuzzy All Over

The worms are reproducing, I’ve got tons of worm castings, and the Fortress Garden is happy. It’s a good day to be a farmer. 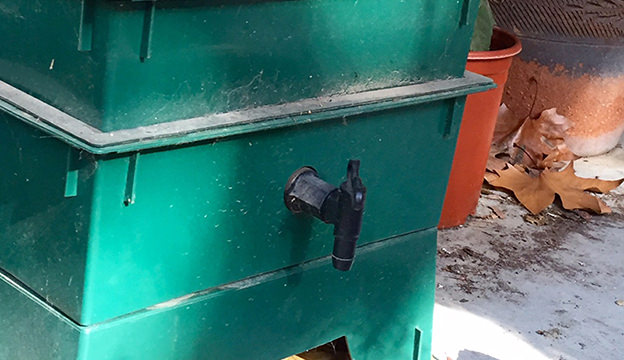 The worms on my front porch have, well, wormed their way into my heart. My worm bin is now in full swing, with all trays online and the population booming. It seemed to take a long time between the very first bin and the second, but now I’m flipping them around rapidly. Well, it’s a worm-kind of rapid, but still …

I didn’t buy my worms; rather, I spent a pleasant afternoon in very old clothes crawling around on a manure pile at the horse ranch in my ’hood, sifting through the top layer and plucking out free-range red wigglers and dropping them into a yogurt container. A yogurt container mostly full of worms seems like a lot of worms, but when I deposited them into their new home, it was tough to imagine that one day they’d be able to chow down enough scraps, dry leaves, newspaper, eggshells or whatever to keep five trays in active rotation.

Apparently, though, they like me! They really like me! I kept them in my bedroom (seriously) for a few weeks but gradually migrated them to the front porch. They seem to be able to handle the colder weather we’re finally having now (though when the temp drops farther, I might bring them back inside), and they can work their way through an astonishing amount of fodder.

I alternate dumping the compost can on the counter between the chickens, the compost pile and the worm bin, but everything eventually ends up in the Fortress Garden. Worm castings make a great addition directly into the soil, or I’ll stuff an old nylon stocking with the castings and whip up a batch of worm tea. I have a 50-gallon rain barrel with a tap, so I can make a big batch—enough to give the entire Fortress Garden a sip, plus some left over for the bee garden and my pot garden of herbs and lettuce.

At this point, I’m preparing for the time when I might have to divide my worm bin. This time, instead of buying the snazzy expensive one, I’m gonna take a stab at using my carpentry skills to knock one together from the scrap lumber I’ve accumulated from various projects. More on that later.

All in all, I’d have to call the worm project a win. I’ve got scads of the tastiest compost around. I’m seriously thinking of doing time-lapse photos on some of the plants I’ve fed with it, because the response to worm castings seems to happen almost visibly. (I think my baby peach tree tried to hug me after getting its dose of worm tea, but I can’t be sure.)

When I get ready to divide the bin, I’ll also be considering relocation. Lugging one bin in and out of the house is one thing, but two (especially if I go bigger) presents tactical difficulties. I’m thinking that the basement/garage area might work nicely, and guess what? Having the worm bin near my planned grow-light/seed-starting area would be awesome!

In good conditions, a worm population can double in about 90 days. This means I’ve now got three or four yogurt containers worth of wormlets. If the population grows according to plan, maybe I’ll go into the worm business. Apparently those little suckers go for about 30 bucks a pound. Could worms be my new cash crop? Only if I can bear to part with them …