Here's how to determine the purpose you want fencing to serve and the various types available to best protect your flock. 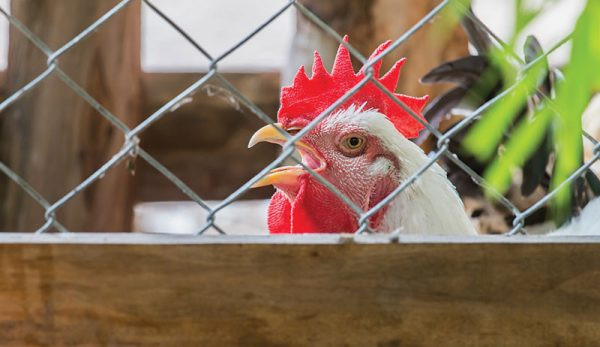 WeŌĆÖre a lucky bunch of chicken keepers, to keep birds in an age of technology where just about anything is available at our fingertips. LetŌĆÖs explore three of the available styles and technologies of livestock fencing and how well they work for our flocks.

Why Do You Need It?

Before spending a bundle on, well, a bundle of fencing, ask yourself why you need the material. Will you use it to rotate pastures for chickens to graze during the day? Will it keep all manner of predators out of the coop? Will it be for a brooder, protecting very small and vulnerable chicks?

Generally speaking, the higher the vulnerability of the inhabitantsŌĆösuch as chicksŌĆöthe heavier duty the fencing should be. On the other end of the spectrum, say, for daytime grazing with the watchful eye of a guardian nearby, flocks might need significantly less.

Birds on a Wire

While chicken wire might seem perfect, itŌĆÖs not a multi-purpose fencing material. Chicken wire of the right height will do a fair job of keeping full-grown chickens confined to an area; most domestic layers will respect the boundary. Some game birds prone to flight, however, might attempt to go over, and the tiniest of the young chicks might attempt to go throughŌĆöand make it.

But chicken wire does have its place. It makes a wonderful option for lightweight jobs, such as covering an indoor brooder for keeping chicks contained, separating birds within a more secure coop (pictured on page 20) or keeping birds out of your garden.

Electric net fencing is usually made of a plastic, semi-rigid material that conducts an electrical charge but also resists sagging. Much of the electric fencing available today is operated by small solar panels sold with the units. When turned off, the fencing is easy to gather up and move.

Electric poultry netting is a favorite with chicken keepers who rotate their flocks among grazing pastures because of that portability. It also helps protect a ranging flock from daytime land predators. For some backyard chicken-keepers with the space to spare, this can be a wonderful tool to give more confined flocks some grazing area without sacrificing large parts of the yard at any one time.

Electric fencing is affordable, but it isnŌĆÖt cheap. Remember that this type of material is also not appropriate for lining the coop or windows, and itŌĆÖs never a replacement for locking up the flock in a secure coop each night at dusk.

Hardware cloth is the name given to a very rigid type of wire mesh material. Unlike chicken wire, hardware cloth has mesh openings of a very small size and is available in a range of thicknesses. ItŌĆÖs available in several finishes as well; the wire might be welded-before-wired, wired-before-welded or vinyl coated.┬ĀEach of these options has a different price and purpose.

Vinyl-coated hardware cloth is best in situations where birds will spend time with their feet in direct contact with the wire, as the vinyl softens the wire and reduces the risk of injury. That said, itŌĆÖs always best that chickens spend most of their lives on solid ground and natural earth, minus the time spent in the coop, which would ideally have a layer of bedding lining the floor.

The other forms of hardware cloth are ideal for securing windows, doors and gaps in the coop. Hardware cloth is as impenetrable as fencing materials getŌĆöwhen it comes to chickens and their predators, anyway. ItŌĆÖs the ideal choice for lining outdoor runs to keep predators out and keep chickens in.

For an added level of security against digging predators, line the perimeter of the coop and/or run with a buried layer of hardware cloth.

Remember these measures and stay ahead of the predators, large and small.

Many of us keep chickens in an effort to reduce our commercial consumption, eat closer to home and/or save money. When itŌĆÖs the latter, we might be tempted to skimp in certain areas. I advise you to consider fencing, and its related coop security, an absolute financial priority.

IŌĆÖve known too many new chicken keepers who went against this advice and lost entire flocks to predators. Rest assured: It can happen to you anywhere you keep chickens. Consider the loss of an entire flock, monetarily and emotionally, a greater one than the commitment to good fencing. As always, an ounce of preventionŌĆöor, in this case, portable electric fencing and hardware clothŌĆöis worth a pound of cure.

Kristina Mercedes Urquhart is the author of The Suburban Chicken: The Guide to Keeping Healthy, Thriving Chickens in Your Backyard (i5 Press, 2015) and the columnist of Chickens magazine's ŌĆ£Fowl Language.ŌĆØ She lives with her husband, menagerie of animals, and two daughters in Asheville, N.C.