Fencing Out Deer Requires Effort—But It’s Worth It

It might be too early to claim a complete and total victory, but on the whole, my fencing and I have finally won the war to keep deer out of my orchard. 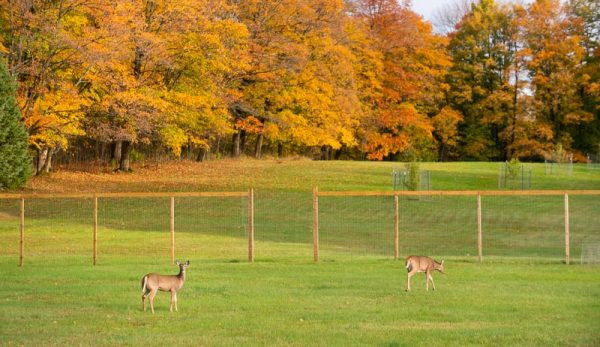 It might be too early to claim a complete and total victory—there are probably a couple more isolated “battles” left to fight. And I know the opposition may never completely surrender.

But that’s okay. Because on the whole, I think my fencing has finally allowed me to win the war against deer in my orchard.

The process began in 2018, when I planted a bevy of young plum and apple trees to serve as the foundation of a new orchard. The chosen locale was at the top of a sunny hill, in an open field surrounded on three sides by forest.

It’s here where the snow first melts in the spring. The ground warms quicker here than the surrounding lowlands. And I often see deer here, sometimes in herds of 20 or 30, grazing on the brown turf as winter transitions into spring.

Deer have roamed in large numbers across my farm for years. They make themselves at home in my gardens and orchards.

In the past, the luckiest fruit trees have survived their annual winter prunings from the teeth of the neighborhood ruminants. But others just gave up the fight, either from over consumption or from antlers scraping off bark.

Read more: Learn how to use graph paper when planning your orchard!

Suffice to say, I wasn’t about to let my new orchard become a preferred stomping grounds for the local deer population. The first year, I put up temporary fences around every tree, using T-posts and welded wire to do the job.

The results pleased me. Deer still roamed between the trees, but they couldn’t actually reach them to inflict damage.

During the second year, I continued to build temporary fencing around each new tree. I also began work on a formidable perimeter fence to enclose the entire orchard. Across the front of the orchard field, I used wooden posts and welded wire to create an attractive entrance.

Then I ran black plastic deer fencing through the three woodland sides of the orchard. I used trees as fence posts in order to reduce costs.

My perimeter fencing performed reasonably well during its first winter. But an ice storm caused some damage, and a deer did get in at one point—I found the tracks.

So in year three, I threw my full attention into improving and strengthening the perimeter fence. In any location where the fence sagged or suffered damage during the winter, I added T-posts. I reinforced the black plastic with welded wire and made sure everything was as strong and tight as it could be.

And I also took a gamble. I planted over a dozen new trees during the third year, but I didn’t erect temporary fencing around them. I decided to trust my improved perimeter fence to protect them over the winter, when deer seem most likely to start munching fruit trees.

Fortunately, my efforts paid off. My perimeter fence performed beautifully. It remains in perfect shape this spring.

No deer have visited my orchard through the first five months of year four. I’ve happily taken down all the temporary fences around my trees, unquestionably enhancing the aesthetics of the young orchard. Best of all, I can now use the pieces from my temporary fences to reinforce the perimeter fence and elevate its durability to another level.

Hobby farmers, this calls for celebration! Sometimes, the battle to protect our gardens and orchards from animal and insect pests can be overwhelming. But as my successful defense demonstrates, it’s possible—with enough time, effort and investment—to score an occasional victory.