Ferment Your Own Vinegar

Make your own vinegars at home, and reap the sweet (and sour) benefits of your brews. 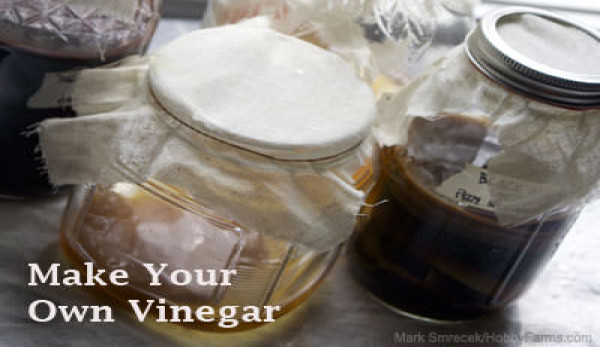 Even the most attentive cook can accidentally make vinegar when an open bottle of wine turns or¬†apple cider starts to ferment. These natural reactions occur because Acetobacter, acid-producing bacteria, cover everything in our environment. Many wise cooks harness these cultures to brew their own homespun vinegars.

Some home cooks concoct vinegar to create unique flavors from fresh ingredients. Mark Smrecek, the Chicago-based home cook behind the blog “From Belly to Bacon‚ÄĚ has soured everything from rye whiskey and pumpkin ale to mulled wine and soda.

“The most interesting thing about beer vinegars, which are typically my favorites, [is] what flavors present themselves in vinegar form versus in¬†beer form,‚ÄĚ Smrecek says, “They definitely differ.‚ÄĚ

Making vinegar is also an excellent way to use up discarded alcohols. That‚Äôs how Andrew Hall, a wine enthusiast in Columbus, Ohio, got his start.

“My first batches were from wine dregs left over from tasting events or parties,‚ÄĚ he says. Off wine, flat beer and excess hard cider make great vinegar candidates.

Vinegar Basics
Vinegar is simply the product of the aerobic conversion of alcohol to acetic acid. Virtually any alcohol, such as wine, beer, hard cider or mead, can transform into vinegar. Hard liquors contain too much alcohol on their own and should be diluted to 9 to 12 percent, which is the ideal alcohol content for making vinegar. Beers below 5¬Ĺ percent might create a weak vinegar, but do not generally have enough fuel for the Acetobacter to survive.

Another way to make vinegar is to use apple cider, juice, or solutions from molasses, honey or sugar. By adding yeast (either wild or brewer‚Äôs yeast), these products ferment into alcohol before becoming vinegar. Many variables contribute to making great alcohol, but any 15- to 20-percent-sugar solution can be fermented for vinegar by adding 1/2 teaspoon brewer‚Äôs or low-alcohol wine yeast per gallon of liquid, covering loosely with a paper towel, dish towel or cheesecloth, stirring daily, and allowing to ferment until bubbling stops in five to 10 days.

Begin the vinegar-making process in a clean environment to encourage fermentation and discourage mold growth. Avoid using metallic vessels because the vinegar can remove the vessel‚Äôs finish and metal can add unwanted mineral flavors to the final product. Many home vinegar makers use wide-mouth half-gallon jars because they‚Äôre inexpensive and easy to clean.

Pour your alcohol solution of choice into a sterilized container with at least 2 inches head space. Head space allows oxygen to reach the surface and also allows room for the mother of vinegar (aka the mass of fermenting bacterial culture) to grow. Date the jar‚ÄĒmany people use painter‚Äôs tape because it‚Äôs easily removed‚ÄĒand place it in an undisturbed location at room temperature. Vinegar forms best between 59 and 94 degrees F.

What happens next could either amaze or disgust you. Naturally occurring Acetobacter will settle in the liquid and form a slippery, gooey layered mother in two to four weeks. Taking the shape of the jar, this cellulose mass consumes alcohol and expels acetic acid, aka vinegar. The mother will continue to grow until all the alcohol is consumed.

Once the vinegar smells and tastes like vinegar, usually in three to eight weeks, the process is complete. The length of time can vary depending on the strength of the mother and temperature of the aging environment; some cultures also reproduce more rapidly than others due to the number and variety of bacteria. Manufacturers have strict timelines and use chemical tests to determine the strength of a given vinegar, but the home fermenter can use their senses to conclude the acetic acid conversion when the vinegar tastes right. Some vinegar finishes stronger than others due to the strength of the alcohol used. Strength is also affected by how long the mother is allowed to act: The strength will maximize after all the alcohol has been consumed and then slowly decline as the acetic acid evaporates and/or converts to water.

Finish the vinegar-making process by straining out the mother and any cellulose layers. The mother can be reused, reducing the aging time on subsequent batches.

“I was gifted a mother from a friend while helping her cut up a bunch of hams,‚ÄĚ Smrecek says. “From the single mother, I have made about 20 batches of vinegar.‚ÄĚ

To reuse a mother, rinse it well and transfer it to a clean jar of alcohol. Raw apple-cider vinegar sold in health-food stores frequently includes a mother, and it can be used to start a new batch. Many manufacturers pasteurize at this point, but that kills the probiotic benefits of live, raw vinegar. Instead, bottle in narrow-necked, nonreactive containers with a tight lid. At this point, you want to minimize the amount of oxygen in contact with the vinegar to stop the action of the Acetobacter. Smrecek recommends reusing sanitized hot-sauce bottles.

Label the bottles with the date and type of vinegar, and store in a cool, dark place, such as a¬†root cellar or refrigerator. Homemade vinegar could keep in these conditions for years but should not be used for canning purposes unless you measure the acidity level with an accurate pH test probe or litmus paper, aiming for 5 percent acidity.

All vinegar benefits from aging after bottling. During this time, the flavor mellows and matures. Allow at least two weeks and up to six months for aging before using homemade vinegar. Raw vinegar might naturally form innocuous sediment during this time, which can be removed by straining the vinegar with cheesecloth. You can also simply shake the vinegar and consume it naturally.

Live vinegar is full of probiotics that are attributed to aiding digestion, among many other health benefits. Plus, cooking with homemade vinegar contributes unique flavors and the satisfaction of making an ingredient from scratch.

Common Vinegar Problems
Homemade vinegar can usually be achieved with a healthy dose of neglect; however, a few errors are common.

Vinegar Flies
Smrecek learned the hard way to double-up the cheesecloth layers and store the vinegars in bug-free areas after a batch of pur√©ed concord grapes attracted record numbers of vinegar flies.

“The vinegar was lovely, but the bugs infiltrated four or five jars of vinegar that needed to be tossed,‚ÄĚ he says.

Too Much Alcohol
If alcohol content is too high, it will kill a mother‚ÄĒas Hall learned when his first attempt at making vinegar from a trendy high-alcohol wine killed the mother. Adding soft, nonchlorinated water to dilute the alcohol enables a second attempt at the ideal alcohol levels of 5¬Ĺ to 12 percent.

Vinegar Turned Water
Smrecek also discovered what happens when you allow too much time for your vinegar to ferment.

“[A pumpkin ale] soured completely in two months‚Äô time and instead of bottling it, I left it for another month. At three months, when I usually bottle vinegars, I tasted it, and it tasted like water.‚ÄĚ

Left in the warm, oxygen-rich environment, the Acetobacter turned the acid into carbon dioxide and water.

Hall experiments with aging vinegars by storing them in vessels to enhance and mellow the flavors. “There is currently a batch of pear-cider vinegar that is aging in a barrel in my garage,‚ÄĚ he says. “[Another] huge batch of wine vinegar is on my porch in a whisky barrel.‚ÄĚ In his experience, the most difficult part of aging vinegar is removing the mother, which tends to clog the bung holes on the barrel. It‚Äôs also hard to resist the temptation to taste for so many months.

Making vinegar is a fun, simple way to turn excess farm-fresh ingredients or alcohol into a unique, delicious preserved product. According to Smrecek, “Once you taste your homemade vinegar, you‚Äôll never go back.‚ÄĚ