Festival Market: A Bunch of Baloney?

Saturday, January 17, was the festival of Saint Antonio. 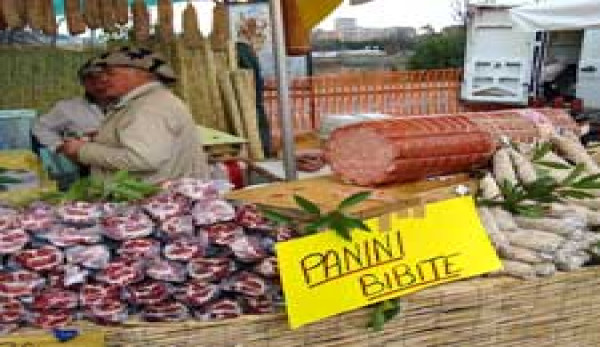 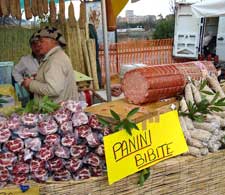 Saturday, January 17, was the festival of Saint Antonio.Â  In honor of Anthony, the town of Chiavari (a half hour down the coast from us) holds a two day festival every year in mid-January.

The highlight of the festival is the huge market that sets up on the streets and sidewalks of the town.Â

Although the market is composed of something like five hundred merchant booths, occupying the whole town center and selling everything from discount underwear to gas stove repair parts, the most interesting part for me is the agricultural section.Â

You can see 60 or 70 agricultural equipment merchants and plant nurseries lining the street alongside the river. And all the farmers from the nearby valleys show up to look at the merchandise and buy a few things.

The festival of Saint Anthony is essentially the beginning (or at least the harbinger) of the new farming season, and there is something about attending that always gets me excited.

The reality is that the merchandise, from underwear to fruit trees, is not of the highest quality, as these fairs are the dumping grounds for merchandise that does not enjoy a secure position in the normal markets of the country.Â

In addition to a few perennial flowers, I purchased a nice-looking jar of hot pepper sauce from a guy who comes from Calabria in the south of Italy, and a nut cracker that resembled a model I particularly like.Â

Although tempted, I did not buy a Mortadella sandwich carved from the six foot log of baloney in the photo here, opting instead for a hot sausage sandwich from another restaurant truck.

My wife, who is a typically Italian snobbish food consumer, looked at the jar of sauce and told me Iâ€™d wasted my money.

She prefers to buy me locally produced hot sauce, and asserts that one cannot be sure what those hoodlum Calabrians might put in their preserved foods.

I had to admit that she was right.Â  So, I pulled out the new nutcracker and tried it on one of the hardshell almonds. The results?Â  Almond 1, Nutcracker 0.

I know the fair is open again Sunday, but I donâ€™t think Iâ€™ll go again.Â  Iâ€™ll just chalk up the broken nutcracker to experience.Â

And watch out, friends in America.Â  Somebody is going to get a beautiful jar of Calabrian hot sauce in their next gift package.