Photo by Audrey Pavia Mr. Molly and Mr. Mabel had to learn how to just work it out among themselves. Last month, I blogged about my two roosters, Mr. Mabel and Mr. Molly. I was feeling grateful that they hadn’t gotten into their yearly brawl. Apparently, I jinxed myself because, the other day, the two […] 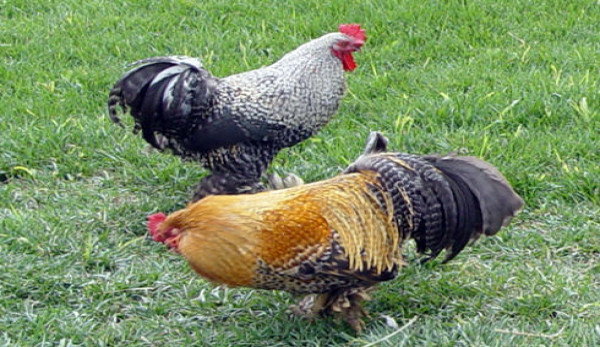 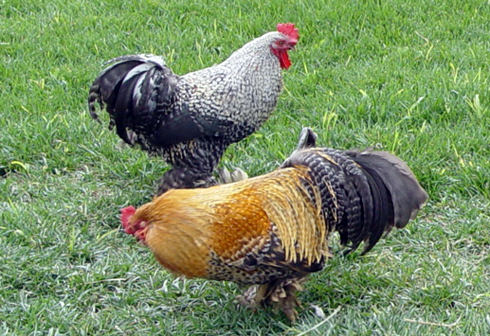 Mr. Molly and Mr. Mabel had to learn how to just work it out among themselves.

Last month, I blogged about my two roosters, Mr. Mabel and Mr. Molly. I was feeling grateful that they hadn’t gotten into their yearly brawl. Apparently, I jinxed myself because, the other day, the two of them went at it.

I’m not sure what started it, but when the battle began, I happened to be outside. Mr. Molly was probably trying to make sexy time with one of the hens, and when Mr. Mabel tried to chase him off, Mr. Molly turned to face him instead of running away. All I know is that when I looked over at them, they were crouching down, face to face, their hackles standing straight up.

Before I could react, they leapt at each other. They stuck, and then jumped back, over and over again. I ran for the garden hose — the only thing I know that will break them up — and squirted them with a strong jet of water. It took a few seconds, but they stopped fighting and ran in opposite directions.

Convinced I had broken up the fight, I went back to grooming Milagro and Rio for a trail ride. All was quiet until I mounted up on Milagro, holding Rio’s lead rope. I planned to “pony” my young horse off my older horse as a way of getting him used to the trail. I then saw the roosters going at it again. This time, they weren’t just pecking at each other; they were raking each other with their spurs.

It takes quite a bit of effort to untie and hold two horses and keep control of them while mounting up on one while at the same time holding the other by a lead-up rope. I didn’t want to start that process all over again by getting off to get the garden hose, so I had the brilliant idea of trying to frighten the fighting roosters with the horses’ hooves. I rode Milagro, with Rio in tow, right up to where the two roosters were sparring. I moved Milagro right next to the birds; his front feet were inches from them. But they were oblivious. I honestly think the horses could have stepped on them and they wouldn’t have cared.

As I sat helplessly on my horse, I remembered what an experienced chicken keeper once told me about roosters who live together: When they get into a fight, you have to let them work it out. It made sense. The two have lived in harmony for all their lives, with an occasional spat in the spring. They always manage to figure it out. So I decided to leave them to their own devices.

When I got back from my trail ride, I wasn’t happy to see that they had blood on their head and neck feathers, but they were back to getting along. Apparently, after some pecking and spurring, they decided to call it quits. Seems all is well again in chicken land.