Flame weeding uses the power of heat to control weeds fast and effectively. 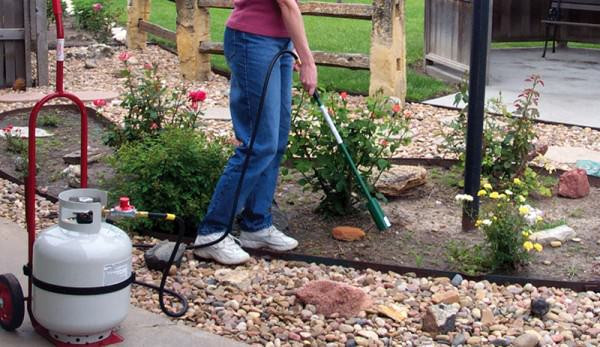 Fire has been a driving force in nature for millennia. It shaped the Earthâ€™s landscape and favored some plant communities over others. Humans learned to use fire to their advantage: Native Americans and early settlers used fire to clear land, attract or drive game, and foster agriculture. Fire was a staple of life.

The turn of the 20th century changed the public perception of fire. Catastrophic wildfires destroyed forests and homes, and a new era led by Smokey the Bear was born. Throughout the United States, fire was perceived as â€śbad,â€ť and the use of prescribed burning for the management of land was dramatically reduced.

Modern agriculture progressed in leaps and bounds as fire found its way off the landscape. Mechanization and specialized cultivators and plows increased yields and helped control weeds. Over the last several decades, agriculture advanced to yet another level. High-tech herbicides and crops were engineered to defeat the pesky and profit-eating weeds. In many respects, theyâ€™ve been incredibly successful. Production has dramatically increased, and cost has remained relatively low.

As the old adage goes, the only thing constant is change, and itâ€™s coming in multiple forms. First, the war on weeds is facing an evolving enemy. Years of herbicide use continue to build herbicide resistance in some weed species. People are changing, too. Pesticides and genetically engineered crops are falling out of favor in some circles. Organically grown crops are in greater demand, and home gardens are becoming more naturally managed.

Flame Weeding And How It Works

Fire has found a way to return to the land for agricultural purposes. Modern technology has dramatically changed its appearance, however. Thermal weed control, also known as flame weeding or flame cultivation, is a management technique using heat to kill weeds. Heat may be applied to plants in three primary forms: direct flame, steam and infrared. Each approach delivers foliar heat of approximately 212 degrees F for a fraction of a second (achieved by a 2 to 3 mph pace). Superheating the plant surface causes intracellular water expansion that ruptures cells. Three days after treatment, weeds are shriveled and dead.

Plants are most susceptible to flame weeding as seedlings. Treatment should be delivered when weeds are 1 to 2 inches tall. Broadleaf plants are easier to control than grasses because grasses have a protective sheath during early development; therefore, grasses might require a second treatment.

Effectively heated plants can easily be evaluated. Plants are not â€śburned upâ€ť from a thermal treatment. A simple pinch between thumb and forefinger will result in an imprint, which characterizes a lethally heated plant. Seed-bed preparation or hilling, like for potatoes, provides an ideal environment for flame weeding. The soil disturbance scarifies seed and fosters extensive weed germination. Over time, improved control can be realized by depleting the seed bank, and the thermal energy kills pioneer seeds on the soilâ€™s surface.

Flame weeding can be used for just about any crop. It has been used in orchards, row crops, potatoes, cabbage and herb production without harm to yield. However, green beans are flame-sensitive, so treatment must be limited to pre-emergence only. Caution must be used with crops that have shallow root systems because thermal control can heat 1/4 to 1/2 inch of soil. Adjusting the angle of flaming and using shields can help protect sensitive crops.

Timing is a critical component, not only to control weeds but also to protect crops. Flaming can be used as a pre-emergent control with little risk. For example, onions with less than 2 inchesÂ of exposed growth can be thermally treated as the terminal bud remains below ground. Corn can also be treated when it is less than 1 inch tall. Potatoes are especially tolerant of heat treatments, but repetition can reduce total yield. Ultimately, experience will maximize effectiveness. Flame weeding is designed to control weeds and give the crops a competitive advantage. Finding that balance takes experience.

Thermal Weed Control: Then And Now

Believe it or not, flame weeding originates in the 1930s. It was commonly used in the production of cotton and sorghum until herbicides emerged. The widespread use of herbicides largelyÂ stalled the advancement of thermal weed control in the U.S., but by the 1990s, the technique had a rebirth with the expansion of organic farming.

Today, innovation continues making it more efficient and precise, and one of those innovators is Greg Prull, of Sunburst Inc., in Eugene, Ore. As a professional forester, he has more than 35 years of experience in integrated pest management that led him into the arena of flame weeding. Heâ€™s spent considerable time and effort innovating delivery systems designed for environmentally friendly weed control for railroads, roadsides, sports fields and crop systems.

When recommending a flaming system, he bases it on the size and shape of the area being treated. The delivery systems should match the circumstance to maximize efficiency.

â€śOur company focuses on ease of use that can be scaled up to the size of the job,â€ť Mel Liman, Red Dragon representative, says. â€śSome torches can be quite intimidating, but our Mini-Dragon runs on a one-pound propane cylinder, which is safe and easy to use.â€ť

The use of open flames to control weeds does conjure images of igniting wildfires. However, the practice is quite safe. Most applications are deployed where dried plant material is absent or decomposed (cultivated soil, roadsides parking lots, et cetera). The weeds themselves are green and are heated, not burned, so most devices are designed with metal shields to control heat distribution to targeted areas, because fire risk is of little consequence. However, Sunburstâ€™s push cart and wagon designs use a patented water-mist technology that maximize heat delivery to the plant surface while minimizing risk of unwanted fire.

If youâ€™re interested in managing your hobby farm in an environmentally sensitive way, then thermal weed control is worthy of consideration. Whatâ€™s more natural than fire? Pesticides certainly have a long and successful history, but they arenâ€™t for everyone. Getting started in thermal weeding wonâ€™t break your pocketbook either. Five-hundred dollars could get you up and running. Expect a trial-and-error period when deploying this management tool, but compared to a hoeâ€”need I say more?

John is a Certified Wildlife Biologist with degrees from Penn State and the University of Georgia. He has worked professionally in five states, spending the last 13 years managing farm wildlife for the Commonwealth of Kentucky. John enjoys habitat management and hunting on his hobby farm in Central Kentucky with his wife, Bobbi, and daughter, Bailey.