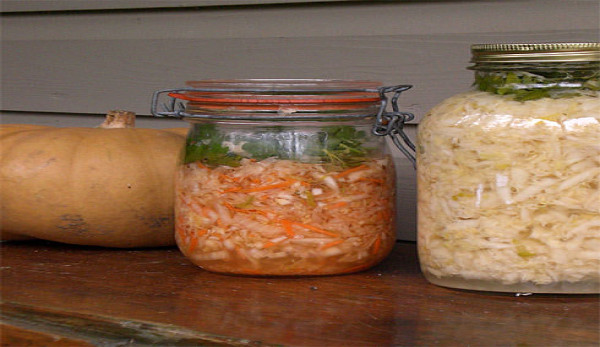 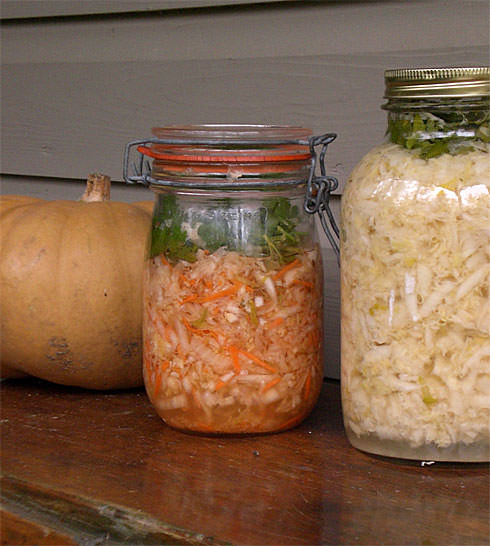 We are harvesting the last of our vegetables now. All of the potatoes and winter squash are in, the eggplants’ and peppers’ days are numbered, and the leaves of the green beans are lacey. The flowers are few, and there are a few dozen lingering beans getting tougher on the vines. Last week, I pulled up our last Napa cabbages, hacking them from their thick stems and slicing off slimy outer leaves and spoiled chunks. They certainly were not beautiful, but I was sure they were still worth a sauerkraut experiment.

My roots are Austrian and Eastern European, but the sauerkraut in my life has always come in plastic bags. It was time to try homemade, although the traditional method of packing the shredded cabbage into a stoneware crock and leaving it covered with a plate in the basement would never work in my mouse-y, warm utility room. Never mind this method for you apartment dwellers.

I also have to forget the Korean method of making red pepper and cabbage kimchi by burying a sealed crock of the ubiquitous spicy condiment in the backyard for truly long-term fermentation and keeping. I actually attempted kimchi one year, and it stayed in the fridge for months; no one in my house really took to my version. This time, I wanted the soft, tangy ribbons of German-style sauerkraut.

I was having visions of the silky choucroute garnie simmered in Riesling, seasoned with juniper berries and topped with pork chops, bursting sausages or even pheasant breasts I’d eaten in Alsace, France. As I seized the homely heads of Napa, I could almost smell the Reubens in the pan: lean pastrami, melted Swiss cheese and sauerkraut between chewy slices of rye bread. I have the homemade fennel-seed mustard ready for those sandwiches, too.

The procedure seemed pretty easy: Run the cabbage through the food processor; add a little salt, about a teaspoon for 3 pounds of cabbage; and wait 20 minutes. Then, massage the heck out of the shreds to produce a briny juice, and put it all up in glass jars with about an inch of brine on top and about 2 inches of head space to make room for the gasses produced by the fermentation process.

I trimmed, hacked and shredded away. I added some carrots and caraway seeds to one batch and some apples and scallions to the second batch. While the cabbage did produce a lot of juice, I still had to quickly stir up supplemental brine to pour into the jars. I added a mass of parsley leaves on top of the mix and sealed them up. Then, I put the four jars in a glass pan on top of a scrap of plastic padding in case of leakage (oh, I hope not …) and tucked them into the coolest corner of the living room.

My instructions directed me to carefully screw open the jars every five days for two weeks to release the gases. Unless the jars explode or the cabbage turns slimy instead of fermenting, I should be toasting the rye bread in about 15 days. I’ll let you know.