A prolific breed that evolved from wild mountain sheep, the Finnsheep offers both meat and soft, lustrous wool. 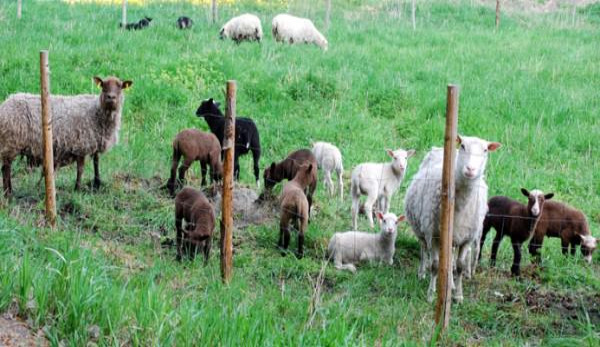 Use: The Finnsheep produces about 5 to 6 pounds of soft, lustrous wool with a moderate crimp, a long staple of 3 to 9 inches, and spinning count in the 50s. Ideal for outer garments, the breedâ€™s wool has found favor with handspinners and knitters. Although these sheep are of moderate size, they also furnish a lean, tasty meat. This bountiful breed has been widely used in crossbreeding programs to produce more prolific sheep.

History: The Finnsheep evolved from the wild Mouflon, a tough mountain sheep inhabiting the islands of Sardinia and Corsica. Known as the Finnish Landrace in its native Finland, this breed counts as its close relatives the other short-tailed sheep of Scandinavian origins, such as the Icelandic and Shetland. The University of Manitoba brought the first Finnsheep to North America in 1966.

Conformation: Most Finnsheep in the United States have white fleeces, but they can also sport black, black and white spotted, and â€“ rarely â€“ brown, fawn, and gray wool. These polled sheep have wool coats that extend to their knees or hocks, straight backs, and slender, wool-free heads. They wag woolly, naturally- short tails only 4 to 6 inches long: no docking required! Rams average 170 to 240 pounds, and ewes weigh around 130 to 180 pounds. Finnsheep enthusiasts praise this breed for its friendly disposition, foraging prowess, and ability to adapt to various climates and rough terrain.

Special Considerations/Notes: Along with the Romanov, the Finnsheep ranks as one of the most prolific sheep. The super-ewes mature early and frequently give birth to litters of lambs, often triplets or quadruplets. Fortunately, birthing problems are uncommon due to the lambsâ€™ small size and the ewes make fine, heavy-milking moms. With more than two or three lambs, however, mother ewe will need help with the feedings.