Use Firewood as Winter Comfort Food for Your Chickens

Provide your flock with a natural protein block and form of activity via firewood. It can help them thrive during cold-weather months. 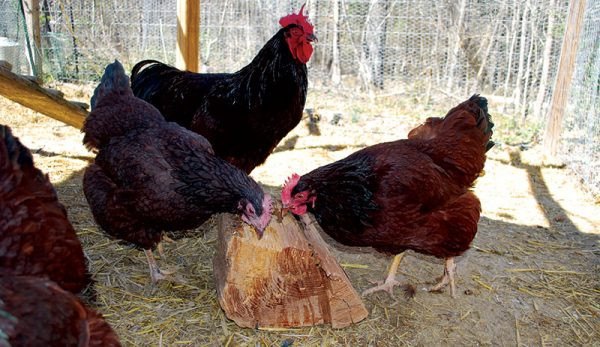 Last winter I was splitting wood, and the first section I cleaved contained crevices displaying a species of hibernating, ebony-colored beetle. A bit later, another split log harbored masses of cold, benumbed carpenter ants. My wife, Elaine, had warned me not to bring inside any more insect-infested wood, as the little creatures, warmed by their proximity to the stove, had commenced to scurry about on our hearth.

I experienced a revelation: Our heritage Rhode Island Red chickens could solve this insect problem. They needed some extra protein and wintertime entertainment, both of which are often in short supply this time of year. So I toted the two chunks of wood to the run and waited to see how our birds would react to their winter comfort food.

As is typical of chickens, they were first alarmed by the introduction of something new into their run, then they became curious. Finally, one brave hen marched up to the blocks and inspected them. She soon ate one of the beetles, and a feeding frenzy ensued until all former inhabitants of the two blocks were consumed. I then brought the â€ścleanedâ€ť logs inside to Elaine and announced that they were bug-free.

Frozen hard ground and snow in winter mean chickens canâ€™t easily find natural protein sources such as insects when they forage inside or outside of the run. So why not bring the bugs to the birds and gain some insect-free wood for the stove as well? Indeed, the next time I appeared with wood in hand at the runâ€™s door, the chickens lined up for their wintertime protein blocks.

Firewood for Fun and Nutrition

Bud Wood, owner of Murray McMurray Hatchery in Webster City, Iowa, agrees that my protein blocks can be fun and nutritional experiences for wintertime birds. He says that chicken-keepers without access to woodpiles can order freeze-dried grubs and other creatures, such as mealworms, from many poultry-supply businesses to serve as great winter protein treats.

Cheryl Filak, store manager for Meyer Hatchery in Polk, Ohio, says dried mealworms, black soldier fly larvae and forage cake blocks that contain dried catfish and crustacean meal work well, as do various fruits, seeds and grains. Filak describes these blocks â€śas the same for chickens as a suet bag is for woodpeckers and other songbirds,â€ť meaning an easy source of energy in hard times.

Use Firewood Only as a Supplement

However, Wood and Filak caution that my natural blocks and other added protein sources should be regarded only as treats and not as primary food sources.

â€śA quality layer feed is designed to give chickens everything they need,â€ť Wood says. â€śThis is what chickens should primarily eat. If you put out a pan of cracked corn and a pan of layer feed, the chickens will always go for the corn first. But corn should not be a chickenâ€™s primary diet. Itâ€™s the same with mealworms or any other animal protein source. Consider the corn and bugs as treats to be given sparingly.â€ť

So if you heat your house with firewood and you find some grubs and insects on or inside the logs, consider bringing the split, insect-laden pieces to your run before bringing them inside your house. Your birds will be entertained by their winter comfort food and your significant other will be pleased with a bug-free hearth.