Do You Need Weed-Control Without Chemicals? Try Flame Weeders

Flame weeders are not miniature flame throwers that set plants afire. Rather, the flame damages weeds enough to destroy their cellular structure. 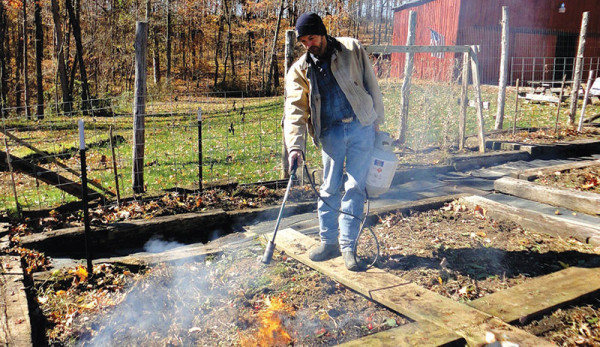 An increasing number of organic farmers are heating up flame weeders as a nonchemical weed management technique.

The goal of flame weeders is not to set plants on fire, but to damage the cell structure of their foliage.

ŌĆ£Brief exposure to intense heat causes the cell sap to expand and that in turn disrupts cell walls,ŌĆØ says Vern Grubinger, a vegetable and berry specialist at the University of Vermont Extension in ŌĆ£Flaming Stale Seedbeds for Weed ControlŌĆØ (2004).

Grubinger explains that the flamed weeds donŌĆÖt keel over immediately, but within several hours or days they wilt and then die.

ŌĆ£Weeds are most susceptible to flaming while still small, ideally as seedlings less than a couple of inches high,ŌĆØ he says. ŌĆ£Broadleaf weeds are more readily killed by flaming than are grasses. Many grasses have their growing point below ground, or they may have a protective sheath around it, so they can usually regrow after flaming. Several passes with a flame weeder, a few days or weeks apart, may be needed to adequately suppress grasses. Repeated flaming can likewise be used to suppress perennial weeds that have stored energy in their roots or stems, allowing them to regrow after a single flaming.ŌĆØ

The advantage to┬Āusing flame weeders vs. more tillage is that you do not disturb the soil.

ŌĆ£This way you do not bring up new weed seeds to the surface where they will germinate,ŌĆØ write S. Tianna DuPont, a sustainable agriculture educator, and Matthew Ryan, of the Penn State Department of Plant Science, in ŌĆ£Creating a Weed Management Plan for Your Organic FarmŌĆØ (2015). ŌĆ£Instead the crop germinates into a ŌĆścleanŌĆÖ bed and has a head start on the weeds. After the first flush of weeds germinate, kill them with flame weeding. Your crop will then germinate into a relatively clean seedbed. The trick is to avoid disturbing the soil surface, which might bring up new weeds. For example, carrots are one of the hardest crops to protect from weeds. Most weeds germinate in three to five days, while carrots germinate in seven to 21. If you seed your carrots and flame a day or two before they germinate, there should be many fewer weeds for carrots to compete with.ŌĆØ

Flame weeders come in a range of human- and tractor-powered models.

ŌĆ£Market-farming equipment options include handheld single-torch flamers, as well as push-wheeled multiple-torch flamers mounted under a flame hood,ŌĆØ Grubinger says. ŌĆ£These small-scale units are easy to operate and very convenient for flaming on farms with many small, sequential plantings of crops. Flaming is especially useful with small crops that are slow to germinate, like onions and carrots, which are not competitive with weeds and are not well-suited to moving a lot of soil into the row during cultivation.ŌĆØ