Top-bar hives have basic as well as optional components. Which ones you use—and how you use them—depends on your beekeeping goals and philosophy. 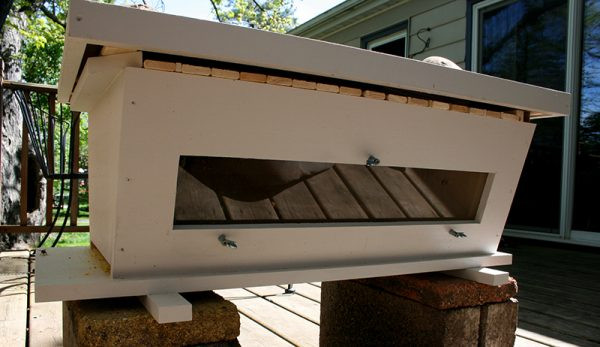 Although my garage is filled with Langstroth-style equipment, I splurged on a new top-bar hive for my bees this year. I’d heard top-bar inspections are less disruptive to the bees and less physically taxing for beekeepers. For instance, to reach my bottom-most Langstroth sections, I once needed to move multiple supers out of the way. Now? I simply open the hinged lid of my horizontally arranged hive and lift out one top-bar frame at a time.

There is ongoing debate about which is better, Langstroth or top-bar hives, but beekeepers increasingly are opting for top-bar hives—of which there are many iterations.

“There is no standard top-bar hive,” says Les Crowder.

“There are a lot of versions of the [top-bar] box and various reasons why people adhere to their particular design,” he adds.

How top-bar beekeepers configure their hives partly depends on their beekeeping philosophy and objectives. For his part, Crowder continually listens to—and learns from—his bees and their choices.

“Why am I telling the bees what they should or shouldn’t have?” he asks. “I’m giving them a place to live and I want them to live as they prefer—not as I think they should prefer.”

Crowder explains how he makes his own modified top-bar hives: “I make a 44-inch-long box and divide it in the middle with a permanent partition. I put an entrance at each end. That way, I can keep two colonies in the same box.”

To make sure bees from one colony cannot join the other, Crowder screws the partition into place. Although he is able to harvest honey, this double-hive configuration lends itself best to the production of honeybees.

“I limit the space to about 14 combs. When [the bees] fill them, they get swarmy,” he notes. “It’s incumbent upon me during the time of year that they’re making honey to inspect briefly once a week.”

If he sees queen cells, he’ll swarm part of the colony into a new hive box.

Crowder avoids using what he calls “coercive gadgets” such as queen excluders. (These barrier inserts are designed to restrict the queen’s access to certain areas inside the hive.)

“There are times of the year when [the bees] want to raise a lot of brood, and, if you don’t use a queen excluder, you’re going to end up with eggs everywhere,” Crowder admits. “But who am I to say that that’s not allowed?”

Invariably, Crowder’s bees ease up on brood production and he still harvests plenty of honey.

“It’s funny,” he says. “My biggest hives make the most drones and the most honey.”

Boards or No Boards

Nearly all commercially available top-bar hives come with “follower boards”—solid, wooden frames sized to permit bees to pass beneath or alongside them. Created to fit snugly next to top bars, follower boards reduce the amount of space in newly established or overwintering hives.

“The idea behind that is the bees don’t want to be in a tiny little cluster occupying a big, empty cavern, so we want to make it more cozy for them,” Crowder says.

But, after experimenting with follower boards, Crowder no longer uses them.

“The bees were no better at overwintering if they were in a space divided by a follower board,” he says. “The reality of how they overwinter is that they don’t really heat the interior of the box. They only heat their cluster. They’re very good at just heating their cluster, and it doesn’t really help them to limit that space.”

Follower boards can also help discourage bees from building cross comb, which is comb that extends beyond one frame and connects it to another. Still, the same result can be achieved by positioning some of the hive’s properly drawn top-bar combs in back and then placing any partially drawn-out combs in between.

Top-bar hives also might or might not include landing boards—sort of a “front porch” that gives bees a place to land. Crowder has tried with as well as without: “I don’t think the bees care either way.”

What some beekeepers see as a drawback might be among the top-bar hive’s biggest strengths. To harvest honey, top-bar beekeepers take comb and all. By contrast, drawn comb from Langstroth hives can be used repeatedly; however, toxins and pathogens can build up on reused comb. Eventually, this can sicken bees.

“After a while, you want to get your old comb moved out,” Crowder says. “It reduces the amount of toxicity if you keep [comb] fresh. I think that helps the bees a lot.”