Use Floating Row Cover to Protect Crops This Fall

You can use floating row cover to protect your crops from the coming colder temperatures. Here are several ways and their benefits. 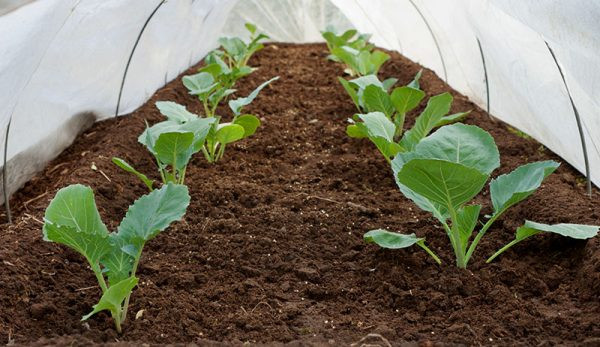 Although the basic function of row cover is quite simpleâ€”protect your crops from cold temperaturesâ€”you can use it multiple ways to help keep your crops warm throughout the shoulder seasons. Today we consider several tips for different ways you can use floating row cover on your farm.

For those growers who havenâ€™t encountered them before, row covers are thin, semi-translucent layers of fabric usually made from some kind of polypropylene. Row covers are air and water permeable. Depending on the thickness of fabric, they let in varying amounts of sunlight. Thicker row covers provide a greater insulating benefit, as much as 8 or 10 degrees F.

Although using row cover on your farm can be more complicated than draping it directly over your crops, it doesnâ€™t have to be. Laying a piece on top of a bed can be a great short-term solution for an unexpected frost or a week of especially cold temperatures. Used in this way, it can be an especially effective frost barrier, preventing the frost from settling on your plants themselves. For short uses like this, you can secure row covers using sandbags or fair-sized rocks you can find on your farm.

Raise Row Cover on Hoops Above Your Crop

Raising the row cover on hoops above your crops is advisable when you plan to use it for longer periods of time. You’ll find this useful in the shoulder seasons when you want to give a crop a head-start by transplanting it out several weeks earlier than the air temperatures would permit. The same can also be true in the fall, when you can use row covers to protect maturing crops from the dropping temperatures. These small tunnels made of row cover stretched over metal hoops are sometimes called â€ślow tunnels.â€ť

In addition to giving the plants more room to grow, low tunnels also permit more air circulation around the crop, and can provide greater frost protection by keeping the settled frost out of contact with the tops of the plants themselves. You can purchase hoops for low tunnels in a variety of sizes, depending on the crops you plan to grow inside them.

Use It With Insect Netting

Row covers have many benefits, including inhibiting pests to some degree, although it was not designed specifically for that purpose. You can, however, use it in concert with insect netting to insulate crops that are also susceptible to pest pressures. Keep in mind, however, that you block more light by covering your crop with a layer of row cover and insect netting.

For especially cold periods, you can also double up row cover to provide additional insulation. The research suggests that a double layer provides an addition 2 to 4 degrees F of insulating benefit over a single layer. As with layering insect-netting and row cover, however, doubling up row cover dramatically decreases the amount of light that reaches your crop.

Use It Inside Your High Tunnel

Finally, you can use row cover inside of your high tunnel to protect crops during intense cold spells. Given the amount of light thatâ€™s inhibited by the high tunnel and the cover, however, donâ€™t expect your crops to put on much growth when theyâ€™re doubly covered like this. This strategy can, however, be especially helpful when a crop has already reached maturity and simply needs protection until harvest time.