Turn your basic browns and common whites into a rainbow egg basket of color with blue-, green- and chocolate-colored eggs! 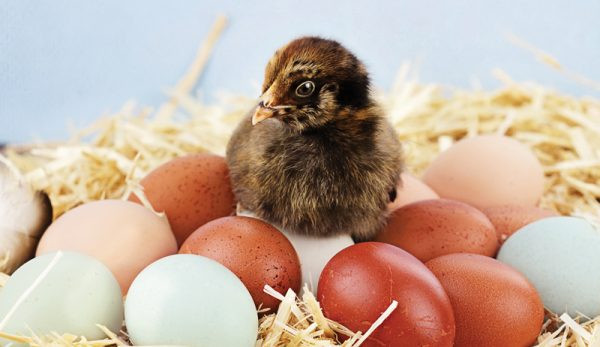 For new farmers, chickens are the ultimate gateway animal. Once you‚Äôve added one or two chickens to your hobby farm, you suddenly realize an entire world has opened up to you.

Will you keep it easy, choosing one or two breeds that lay eggs perfect for breakfast? Or, like countless others before you, will you head down the rabbit hole in search of eggs that make up the perfect rainbow dozen?

To obtain the elusive rainbow dozen, you need to build your flock with select chicken breeds that can produce eggs prettier than anything you‚Äôve seen at Easter. Plucked from the nesting boxes and lined up in an egg carton, these eggs are all about aesthetic, made up with shades of blues, greens, light browns, chocolate browns, shades of white and, if you‚Äôre lucky, pink, too.

If you sell your eggs for profit, you‚Äôll find a dozen rainbow eggs will fly off the shelves of your farm stand. Even if you don‚Äôt sell your eggs, there‚Äôs nothing like heading out to the coop with your egg bucket and discovering the amazing shades of the day.

If you‚Äôve seen a bright blue or deep chocolate-colored egg, you might be surprised to know that egg actually started out white. From start to finish, it takes around 26 hours for an egg to travel through the chicken‚Äôs oviduct. Twenty of those hours are spent completing the eggshell.

Some birds, such as the Ameraucana, have the pigment oocyanin deposited on the egg as it travels through the oviduct.

‚ÄúThis pigment permeates the eggshell resulting in the interior and exterior of the egg being the same blue color,‚ÄĚ according to Michigan State University Extension. ‚ÄúChickens that lay brown-tinted eggs deposit the pigment protoporphyrin on the eggs late in the process of forming the shell. The pigment therefore does not penetrate the interior of the egg, but tints only the surface of the egg, which is why brown eggs are white on the interior.

“In the case of an Olive Egger, a brown pigment overlays a blue eggshell resulting in a green egg. The darker the brown pigment, the more olive color of the resulting egg.‚ÄĚ

While you can‚Äôt control the tiny details, if it‚Äôs a rainbow dozen you‚Äôve set your sights on, these are the chickens you‚Äôre looking for.

No farm? No problem. Read more about urban chicken-keeping here.

Blue eggs are the most sought-after egg color. Depending on your chicken of choice, you‚Äôll find different shades of blue, too.

This is a rare breed, so you probably won‚Äôt find an Araucana chick at your local feed-supply store.

While they lack beards, muffs and tail feathers, Araucana chickens have ear tufts gone wild, erupting from the sides of the head like a 70s-style bob.

Chicken enthusiasts choose Ameraucana chickens based on looks alone. They have sweet faces with little muffs erupting from their cheeks, pea combs and friendly dispositions.

Ameraucana chickens come in a variety of colors including

This breed is an offshoot of the Araucana. And if you have a true Ameraucana in your hen house, you‚Äôll be treated to around 250 bright blue or pale blue eggs per year.

Keep in mind that if there‚Äôs a crossing of your Ameraucana with other chicken breeds, your eggs could end up a shade of green instead of blue.

The Cream Legbar is another relatively rare chicken breed, but if you can get your hands on one or more of these hens, you‚Äôll enjoy eggs in a beautiful blue color.

Not as prolific a layer as the Ameraucana or Araucana, they‚Äôll lay an average of 180 sky-blue eggs per year.

Cream Legbars are also unique in that they are auto-sexing. This means you can tell the female chicks from the male chicks upon hatch.

An egg with a white color might seem almost boring in comparison to blue, green or chocolate brown. But white eggs are a solid staple for your rainbow dozen.

When you want white eggs and lots of them, the White Leghorn is the chicken to choose. A breed that‚Äôs an above-average layer, it can produce up to 300 eggs per year and may even keep laying through a long, dark winter.

Known for its large, floppy comb and white feathers, the White Leghorn is a good flyer. The breed loves to explore and is a valuable addition to any flock.

Add a few Ancona hens to your flock, and you‚Äôll enjoy a sturdy breed that lays an average of 220 large, white eggs per year.

The Ancona is a heritage breed that does great in all types of weather. It is known for its ability to forage and its lack of interest in brooding.

Chicken fans love the Polish breed for the large muff on top of its head. It almost completely obscures its eyes, so you‚Äôll find this chicken is constantly surprised by the world right in front of its beaks.

Keep in mind that most chicken-keepers choose this breed for its stylish appearance. But a Polish hen can still lay 120 to 200 white eggs per year.

Check out these four ornamental chicken breeds to add to the yard.

Off-white isn‚Äôt just a shade you paint the walls in your home. It‚Äôs a great color to add for contrast in your rainbow dozen, and there are a few hens that lay that shade of egg.

The Brahma are fluffy birds with feathered feet and a quiet disposition.You‚Äôll love them for their size and style. But you‚Äôll really appreciate the light brown eggs they lay.

You can find Brahma chickens in Dark, Buff and Light colors. And they lay approximately 200 medium-sized eggs per year.

Even in the cold months, the Wyandotte is a calm, friendly chicken that will reliably produce eggs throughout the year.

You‚Äôll love the intricate lacing on their feathers, and the different colors including Golden Laced, Buff Laced and Silver Laced.

Keepers get approximately four light brown eggs per week from this type of chicken, amounting to an average of 250 per year. Just keep in mind that if you leave a pile of eggs near a Wyandotte, she may just decide she‚Äôs found the perfect spot to hatch a new family.¬†

Every new chicken-keeper loves the silky breed of chicken. Known for its soft, fluffy appearance, the Silky is a small chicken that‚Äôs picked more for size than production.

A Silky hen is a known brooder. But she will also lay around 120 small white eggs per year.

An egg or two with a brown color is the staple that ties your rainbow dozen together. You may want to choose more than one brown egg layer.

One of the most popular breeds of chicken, the Rhode Island Red is known for fiery red feathers, its easy-going and friendly nature, and the ability to lay large to extra-large brown eggs.

On average, you‚Äôll get 300 or more eggs per year from a Rhode Island Red hen.

The Barred Rock is another popular face in the hen house.

This grey speckled chicken is widely known for its sweet nature, lack of interest in brooding and the ability to lay at least 200 large brown eggs per week.

Every flock needs an Australorp or two. You can find blue, white or shiny, black Australorps with splashes of purple.

No matter which you choose, an Australorp hen will be large, sturdy and able to lay an average of 250 medium brown eggs per year.

On the scale of one to blue, you‚Äôll find that deep, dark chocolate runs second in the top 10 most-sought after egg color in a rainbow dozen.

Out of all the chickens that lay dark brown eggs, the Black Copper Marans will produce the darkest.

This breed is known for quality, not quantity, because the Black Copper Marans is not the most productive of layers.

While you‚Äôll want to fill up your egg carton with these large, beautiful eggs, the average hen may only lay three eggs per week or 150 to 200 per year.

No two Welsummer hens are alike, especially when it comes to eggs.

Some will lay chocolate brown eggs. Other Welsummer eggs appear speckled or display a patchy pigmentation.

Despite that bit of uncertainty, the Welsummer is a great addition to your flock thanks to its ability to lay up to 250 large eggs per year.

If you have the opportunity to add a Barnvelder or three to your flock, you should do so in a hurry. Once these hens come of age, they‚Äôll fill your nesting boxes with an average of 200 dark brown eggs per year.

Pale green, khaki green or a beautiful green-blue‚ÄĒit‚Äôs easy to obtain a green egg color. But most of the chickens who lay them aren‚Äôt recognized as breeds on their own.

The Swedish Isbar is a rare chicken breed, so it‚Äôs definitely not one you‚Äôll find in your local farm-supply store.

If you do manage to find an Isbar, you‚Äôll enjoy a regal chicken with a single comb and productive egg schedule. Isbar hens will lay approximately 200 eggs per year in various shades of green.

Once you do, you‚Äôll enjoy around 200 beautiful green eggs in various shades.

With a variety of these chickens cozying up in your nesting boxes, every day will bring a unique mix of contrast and color.

This article originally appeared in the May/June 2020 issue of Chickens¬†magazine.