Backyard flocks might not fly with the seasons, yet their wild instincts play an important role in social bonds and creating a collaborative community. 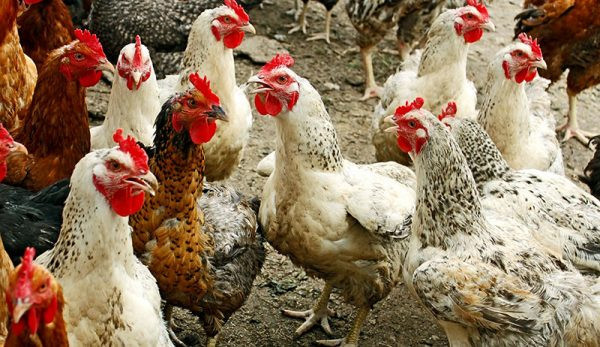 Why do wild birds flock? When animals evade predators, thereâ€™s safety in numbers. More eyes watching and more ears listening means better chances of noticing a fox or hawk on the hunt. Flocking also communicates social status and provides necessary warmth. Whether they’re flying across the continent for seasonal migration or just bonding in your backyard, wild birds and domesticated poultry share some interesting flocking behaviors.

The answer isnâ€™t all that clear. In the wild, flocks of birds might not be led by a single individual. Nor does the movement of a single neighbor cause a change in direction. Even in V-shaped flocks of geese, the speed, height and direction of the group is coordinated collectively.

To really learn about flocks, researchers have studied European starlings. If youâ€™ve ever witnessed a murmuration (thatâ€™s what a flock of starlings is called), youâ€™ve seen the experts of aerodynamic choreography. Starlings’ sky dance resembles the movement of schools of fish. And in both it’s equally difficult to track individuals and figure out what each one is doing.

The Starflag project and related research has narrowed the signals that affect an individual starlingâ€™s flight pattern. Starlings respond to the activities of as many as seven nearby birds. Like an electric impulse, the flock is able to pass, receive and process messages almost instantaneouslyâ€”something like, â€śSharp left! Dive and curve right!â€ťâ€”avoiding critical misunderstandings and doing so in midair. Regardless of starlingsâ€™ status as invasive pests, their acrobatics astound the watcher.

Check out this mesmerizing video:

Other research has shown how birds avoid collisions in crowded flight situations. In experiments with small parrots, the birds tended to veer to the right to miss hitting an oncoming bird. A kind of internal traffic control system has been wired into their biology and given them the tools to survive the hazards of air travel.

Flocks With Feet on the Ground

How does this relate to the common poultry kept on small farms and backyard homesteads? Even though poultry like chickens, turkeys, quail, pheasants and partridges are galliformesâ€”heavy-bodied birds that spend most of their time on the groundâ€”their flocking behavior shows similarities to migratory wild birds. Their wings and flight flocks are less important, but they still group together on the ground. Domesticated chickens descended from wild junglefowl, which use their strong feet and legs to scratch for food and run away from predators. Being alone puts them at a greater risk to be picked off.

In the wild, they live in small groups, and males might try to form harems or sometimes pair with just one mate but usually are not monogamous. Unlike migratory flight flocks, a rooster is obviously a leader in a domesticated chicken flock, yet the structure of the group is equally important to the birds’ collective health. Stable flocks are healthier flocks. They use less energy establishing a pecking order, eat more and fight less. New members throw things out of balance, and crowding only intensifies the stress.

Chickens have longer and more detailed memories than often acknowledged. They know individuals in their flock and recognize them upon their return if separated for a significant amount of time. While starlings might watch seven of their flock mates at the same time, chickens can recognize as many as 80 individuals, according to The Encyclopedia of Historic and Endangered Livestock and Poultry Breeds.

The social structure of wild geese and ducks is different than domestic chickens and domestic ducks. In the wild, they are much more likely to form monogamous relationships, yet domesticated male ducks and geese mate with many females. Flocks in the wild are easy to observe in the fall and spring, and their strong wings are built for long migrations. Their biggest time of vulnerability is during their flightless molting period. This probably led to their domestication, when prehistoric hunters could capture them, and young ducklings would imprint easily on humans.

In a small farm or backyard flock situation, geese and ducks still flock together strongly on the ground, which makes them easy to move. Because all members of a flock of geese will not sleep at the same time, with some keeping a lookout for trouble, they make great watchdogs.

If you have a backyard or small farm flock, give your poultry some credit for flocking together for the good of the group. Watch their behavior closely. Who moves and when? Who leads and who follows? How do they avoid collisions? What does it take to herd them along? Backyard flocks might not fly with the seasons, yet wild instincts play an important role in social bonds and creating a collaborative community of feathered friends.