Austin Graf from the Tennessee-based flower farm Buzzed Blooms tells us how producing flowers and running a seasonal enterprise has become his true calling. 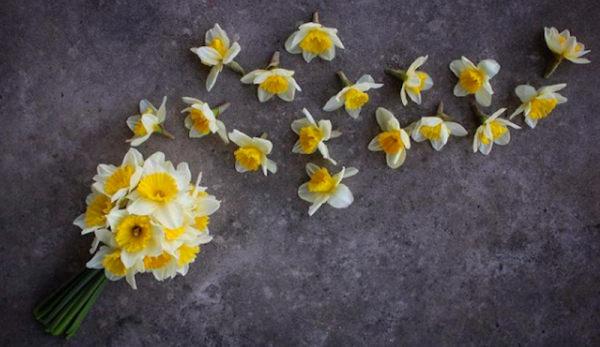 “For us, farming meant food,” says Austin Graf. He looks back on growing up on a small farm with a kitchen garden and some beef cows. “Farming was our way of helping make ends meet.” Those early roots helped pave the way for Graf’s journey to running Buzzed Blooms, a sustainable and seasonally-focused flower farm in Manchester, Tennessee.

He says that he’s always felt “the connection to the land and wholesome food” that comes with farming. However, he never really saw it as a viable careerâ€”until serendipitous circumstances ushered him into the field of flower farming.

We spoke to Graf about the sustainable dynamics of micro-farming and accepting the calling of a flower farmer. We also touched on the nourishing nature of blooms.

When Graf pinpoints where his interest in farming began, he credits the role of what he calls “patchy cows” in the story.

While accompanying his dad to meet livestock brokers, Graf recalls how they’d “give my dad a hard time. The whole county had black Angus beef cows. But our farm always had the most colorful patchy cows around.”

He adds, “My dad did that for me. I felt bad for all the other cows that nobody seemed to like.”

Read more: Check out these 5 miniature cattle breeds that are perfect for small farms.

From Patchy Cows to Fainting Goats

Graf continued to take his early farming steps, and his interests transformed.

“As I got older, patchy cows turned into spotted Nubian dairy goats that I hand-milked morning and night throughout high school,” he says. “I learned to make homemade cheese and soap. I got chickens for fresh eggs. And I continued gardening.

“Then I started discovering livestock preservation and adding rare breeds to our farm to preserve them from extinction,” he continues. “At one point we had a full dozen Tennessee fainting goats. It was just what I loved.”

These days Graf runs a flower farm. The career choice, he admits, came “by pure chance.”

After graduating college and taking a gig in marketing, Graf found himself growing restless. He missed the farm life.

Graf persuaded his brother to let him use a 10 by 20 foot garden. He then “threw some dahlia tubers in there. They were on clearance at the grocery store, so I thought why not?”

When everything else but the dahlias in Graf’s garden perished, he did a little research and “stumbled across flower farming.” Graf discovered that cut flower production was actually the second most profitable crop per acre in his state. This, he thought, could develop into a lucrative avenue.

“Suddenly everything I’d ever known about farming changed,” he explains.

After starting with a packet of zinnias, Graf received an offer for what seemed likes a “dream job” that would require giving up the garden. “I chased the dream,” he says. “And guess what? That dream sucked. I was miserable.”

Thankfully, Graf’s parents cared for the nascent flower garden. The garden finally allowed him to return to his calling as a flower farmer.

“This is my second season full-time,” he explains. “It’s been the hardest two years of my life, but it’s also been the very best.”

Read more: Flowers as food? Yes! Try these 5 kinds of edible flowers in your garden.

“The very idea of flower farming on a local level is sustainable,” says Graf. He adds that early on in the career that eventually led to Buzzed Blooms, he found himself “shocked by the volume of flowers the United States consumes. I became even more shocked when I found the percentage of those flowers that are imported.”

Committing to producing flowers without a high reliance on fossil fuels, Graf honed in on biodiversity.

“For me, true sustainability in agriculture is dependent on that biodiversity,” he explains. “My gardens come to life with butterflies and mantis. Pests are controlled by a healthy balance of nature, not a ridiculous amount of pesticides.”

This sort of approach definitely requires more labor. But Graf is convinced that “the future is more farmers producing a larger variety of goods on smaller plots instead of one farmer farming 3,000 acres.”

Flowers to Nourish the Soul

Reflecting on the joys of flower farming at Buzzed Blooms, Graf says that the most rewarding part of his role comes from witnessing reactions when people receive flowers.

“When you’re growing food, you’re nourishing people,” he reasons. “There is that clear distinctive feeling of pride when someone is eating your produce.

“And it’s the same with flowers. Flowers nourish the soul.”