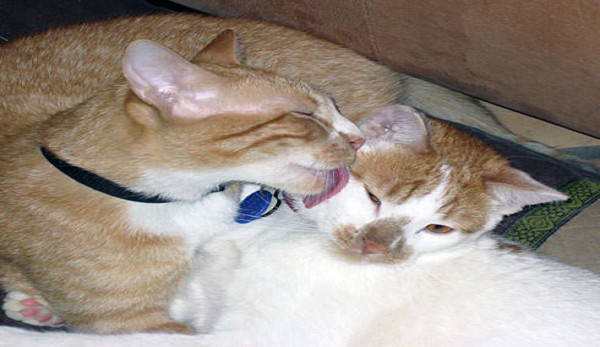 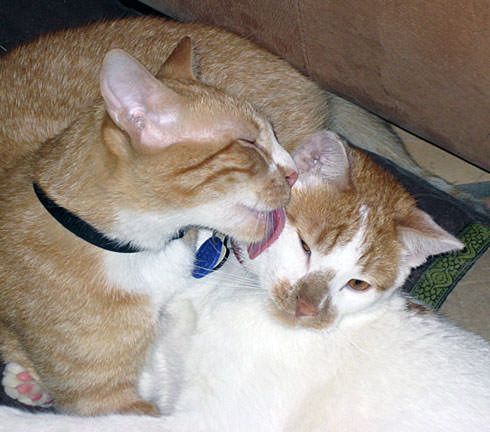 Cheddar and Stanley, in a moment when they are getting along.

Cheddar and Stanley are litter brothers. They were part of a litter of eight kittens my sister (a vet) rescued from euthanasia at the age of 4 weeks. They came into a shelter where she was doing her clinical rotations while she was in vet school at Texas A&M. Mom and all of her babies had a bad case of ringworm, and rather than see them all put down, my sis opted to take them home and treat them herself.

She saved all kittens and their mom, and then went to work trying to find them a home. I took two of them, which we named Cheddar and Stanley. They were 6 months old and best friends.

But about four years ago, trouble started. It began on a windy day, when a big gust blew open the French doors in my office that open to the front porch. I heard the commotion and raced to shut the doors before any of the animals could get out, but the psychological damage was done. The loud blast of the wind, the doors slamming against the walls of my office, and the whoosh of cold air and leaves blowing inside were all too much for Cheddar and Stanley, who happened to be in the office at the time of the incident. They turned on each other with hisses, growls and a subsequent attack, and life hasnâ€™t been the same since.

Iâ€™ll never completely understand how two cats could go from spending the past four years sleeping, playing and eating together to suddenly becoming archenemies, all in a single moment. But thatâ€™s what happened. The two cats began fighting incessantly from the windy day forward. Screams in the middle of the night would awaken us, and Iâ€™d run out into the living room to find wads of Stanleyâ€™s white hair all around. Stanley always seemed to get the worst of it.

No matter what we tried, we couldnâ€™t get the cats to stop fighting. Close observation revealed that Cheddar was the aggressor, always starting the fights. I fitted him with a cat bib to discourage him from stalking and pouncing, but the bib is designed to discourage cats from killing birds, not fellow cats, and it didnâ€™t really work.

So, in desperation, I went the psychiatric route. My sister put Cheddar on fluoxetine, otherwise known as Prozac. Normally, cats are put on fluoxetine to stop such behavior as urinating outside of the littler box and hyperthesia syndrome.

It seemed to help at first, but then the fighting resumed. It was then that I realized that Cheddar wasnâ€™t the only problem. Stanley was encouraging the attacks! He would come up to Cheddar, crouch and hiss, as if to say “Look at me! Iâ€™m weak and scared! Beat me up!â€ť So Stanley was placed on Prozac, too.

Thanks to these meds, my cats now love each other again â€” most of the time. They still get in occasional fights, but they are short-lived and less ferocious than before. Most of the time, the two brothers can be found cuddled up next to each other, sleeping or grooming one another.

When it comes to crazy cats, drugs can be a wonderful thing.