I lose sleep over a lot of things, but I never thought flying squirrels would be one of them. Ah, country life. 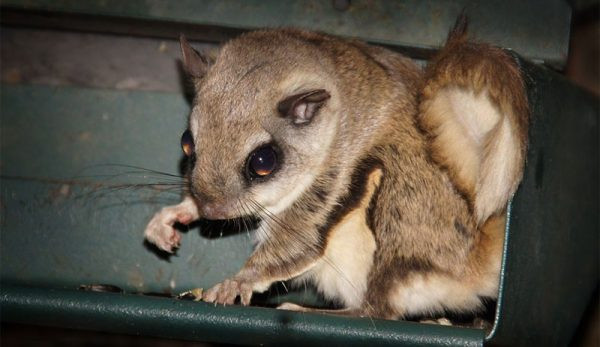 You know you live in the country when â€¦

That phrase is going around our house lately. Two years since our migration from the city and the differences between urban and rural living are still quite stark. While we’ve become more accustomed to the norms of our country homesteadâ€”the dark starry nights, the sound of tractors echoing through the holler, the 24-hour symphony of wildlife, the relentlessness of biting bugsâ€”we havenâ€™t been here long enough for this lifestyleâ€™s surprises to become commonplace. The latest incident to add to the litany of unexpected life changes is the source of our insomnia. We’ve traded noisy neighbors playing loud music late into the night for flying squirrels using our house as their midnight playground.

We’re parents of a nearly 1-year-old, so youâ€™d think that tending to teething pains and late-night nursings would be the reasons weâ€™re short on zzzzâ€™s. Yes, Iâ€™m surprised to find that at this point in my parental journey, itâ€™s not a screaming infant but instead the unsettling sound of scratching on the roof that leads me reaching for my morning coffee.

To be quite honest, I wasnâ€™t aware until now that Kentucky was home to flying squirrels. When we first heard that scratching outside the walls of our house, we believed it was the raccoons that keep watch for goodies on the porch or the birds nesting in the eaves of the roof. But as we continued to hear this sound night after night, we realized it was too loud to be a bird yet not enough clatter to be a raccoon. As the sounds continually woke us up at midnight (and 2 a.m. … and 4 a.m.) from different corners of the house. Mr. B, of course, had to investigate.

Armed with a big flashlight, he ventured into the night to spy on the critter making the ridiculous racket. After a few minutes gazing up at the high pitch of our roof, he saw our nemesis take a leap and glide down to the base a nearby tree. Now, he thought, thatâ€™s either a rather elegantly swooping bat, or weâ€™ve got flying squirrels on our hands. Turns out it was the latter.

Flying squirrels are nocturnal cousins to the gray squirrels that run around these parts. To their credit, they like to feast on bugs Iâ€™d rather not have crawling around my house and on hickory nuts that are oh so plentiful on our land. They are actually quite cute, and I feel fortunate that we have them in our woods and have managed to catch a glimpse of their acrobatic feats. However, what makes me cringe is the destruction they could do to our house.

Flying squirrels have been known to chew their way through gaps in a structureâ€™s walls or roof, nest in attics, and even damage electrical wiring. Well, our cabin-like house has a tall pitch with 40-foot-high ceilings and no attic. Physically getting to the place where theyâ€™ve been playing is pretty difficult for us. Plus, I fear that if these buggers make their way in, at best, weâ€™ll be staring at the nighttime sky from our bed, and at worst, have flying squirrels using our faces as landing pads.

So right now, our goal is to scare the flying squirrels off. The method? Mr. B throwing tennis balls at the walls to instill fear in them. (It doesnâ€™t seem to be working.) Weâ€™re considering other tactics: Nerf guns? BB guns? We donâ€™t want to hurt the squirrelsâ€”just let them know that our casa ainâ€™t their casa. A family member uses coffee grounds to repel gray squirrels from his house, so perhaps thatâ€™s worth a try, but Iâ€™m unsure how to secure them to our steep roof. Iâ€™ve also read that itâ€™s possible to capture flying squirrels in a live trap, though if weâ€™re going to release them into our woods, whoâ€™s to say they wonâ€™t make their way back?

Like most of the challenges we face as newbies to the country, this situation leaves us feeling rather helpless. Itâ€™s difficult to know the right course of action when you canâ€™t draw on a lifetime of experiences to help in your decision-making. It also seems like if we donâ€™t get a handle on the situation fairly quickly, it could mean some costly consequences in the future. No one said this life would be easy, but in two years weâ€™ve learned so much, and it looks like these flying squirrels have another lesson in store.