Susan from the Michigan-based Chick Outta Water tells us about warding off hawks, battling coyotes and coming up with food-based chick names. 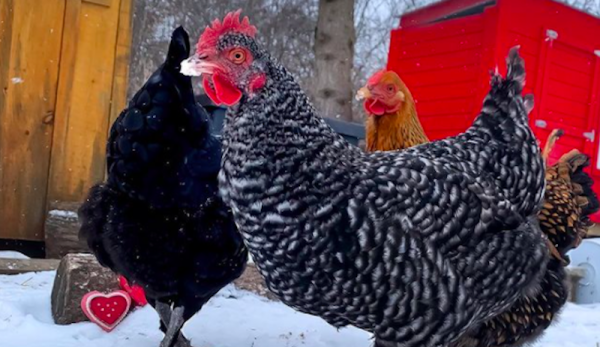 “I definitely do not consider myself a farmerâ€”more farmer-ish,” says Susan from the popular Chick Outta Water Instagram account. Based in Washtenaw County in Michigan, Susan presides over a flock of backyard chickens that all began when she added three Isa Brown pullets to her property.

“I had been curious about chickens when I … met friends who kept them in small back yards,” explains Susan. “The fresh eggs were delicious, and I was fascinated how kitchen scraps could be given as treats and avoided the trash!”

Taking a moment out from tending to her chicks, we spoke to Susan about the roots of Chick Outta Water and how a TJ Maxx score helped shape her early backyard setup. We also got into the fun and games of naming chickens.

Susan’s farmer-ish journey began when she grew some tomato, pepper and cucumber plants while living in a condo apartment.

After moving to a larger spot, she added beds and decided to “constantly change up what we grow each year based on family needs and past season experiences.”

Read more: Should you vaccinate a flock of backyard chickens?

When it comes to adding backyard chickens to her property, Susan originally heeded encouragement from “one of my actual farmer friends who offered to get a few extra chicks in the spring.” After the same friend raised the chicks until they were ready for outside coop life, Susan embraced the three Isa Brown pullets and says “we haven’t looked back!”

Building on the joy of keeping chickens, Susan adds, “I also love that kitchen scraps that aren’t composted can be re-routed to the birds as treats instead of headed into landfills. They in turn give us amazing fertilizer for the garden.”

TJ Maxx Versus the Predators

Predators pose a huge problem for backyard chickens. “We lost two of the three in that first winter to hawks,” recalls Susan. “They lived in a small prefabricated coopâ€”from TJ Maxx of all places!â€”so we let them out occasionally in the run. [But] since it was uncovered, the hawks still had access.”

Since those early days, Susan says she made some key changes to help to ward off hawks. But now the prowling eyes of coyotes have stepped in.

“It’s always a work in progress and learning what works best,” she says.

Read more: Protect your flock against predators with these tips.

How to Name a Chick

“When we first started, we mostly named our chickens with ironic food names,” says Susan. “Our first three were Buffalo, Strips and Martha (for my friend who got us started).”

Since then, Noodle Soup, Dumpling, McNuggets, Cashew and Parmesan have been added to the mix. But Susan says that, as the number of chickens increased, it grew trickier to keep up.

“We started letting friends help pick names, my daughter named a couple and I just pick something I find amusing,” she says. “The last three I named were Tikka, Masala and Shwarma. My niece helped pick Gelato, Sorbet and Fro-yo.”

“Chickens are so rewarding,” says Susan as she looks over her peep. “I love watching them go out in the yard or woods scratching and pecking. It’s therapeutic! They all seem to have their own personalities, which I never realized before we got them.”