Keeping a healthy compost pile is about more than tossing scraps and clippings. Here are some tips for composting right for a beneficial pile. 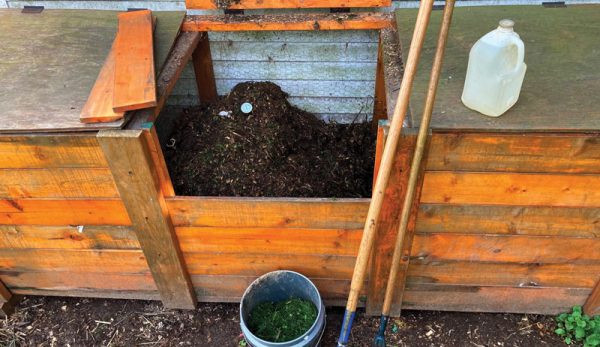 In lieu of sending them to the landfill, composting nitrogen-laden food scraps‚Äîalong with fallen leaves, straw and even cardboard‚Äîcan pay dividends to you on the farm and to the wider world. That‚Äôs because eliminating (or at least reducing) food waste is one of the most meaningful actions we can take to mitigate climate change.

In fact, 20 percent of greenhouse gas emissions from landfills come from food waste.

So, if you don‚Äôt currently compost but you could, you definitely should. And if you already have a pile? Ideally, you are encouraging mostly aerobic, rather than anaerobic, decomposition.

When carefully tended, a ‚Äúhot,‚Äù oxygen-rich compost pile breaks down in a jiffy. Unfortunately, there are plenty of gardeners who toss their kitchen scraps and garden waste onto the pile but never add water or run a pitchfork through the mess.¬Ý

Sure, these colder compost piles eventually decompose. But they‚Äôll also release some degree of potentially harmful methane along the way. How much?

That depends on the size and contents of your pile.¬Ý

‚ÄúMethane is a major contributor to today‚Äôs [climate] warming,‚Äù says Ilissa Ocko. ‚ÄúIt actually contributes more to warming in the short-term than all of the CO2 emissions that we‚Äôre emitting today from fossil fuels.‚Äù Ocko is senior climate scientist and the Barbra Streisand Chair of Environmental Studies at the Environmental Defense Fund.

Partly, that‚Äôs because methane is itself a heat-trapping gas. And it takes about 10 years to break down in our atmosphere.

But even after that methane‚Äôs gone? ‚ÄúNinety percent of the excess heat that is being trapped right now is going into the ocean,‚Äù Ocko says. ‚ÄúSo, then you get this feedback cycle where a warmer ocean actually emits more carbon dioxide into the atmosphere…. What ends up happening in that case is that signal ends up lasting for hundreds of years.

‚ÄúThe CO2 we emit this year‚Äî20 percent of it will still be there, warming the earth, 1,000 years from now. CO2 builds up.‚Äù

Read more: You need to compost! Here’s why and how to get started.

Of course, compared to the methane released from all of our landfills, wastewater, livestock holdings and rice farms, the methane from one small, ‚Äúcold‚Äù compost pile is negligible. But it all adds up. And, besides, with a little vigilance, you can avoid being part of the problem.

As they decompose your banana peels and other organic matter, the bacteria in your compost pile produce methane. If there‚Äôs plenty of oxygen in the pile, this methane is further broken down.

But what happens without enough oxygen? ‚ÄúThe process ends at methane, and the methane is emitted,‚Äù Ocko says.

Together, your pile‚Äôs size, porosity, moisture content and carbon-to-nitrogen ratio determine whether the organisms in your compost are breaking down matter aerobically or anaerobically. It‚Äôs worth noting, too, that no pile is exclusively aerobic or anaerobic all of the time. Different kinds of organisms step up at different stages in order to decompose your raw materials.¬Ý

For best results, your compost pile should occupy at least 1 cubic yard, and it should contain a blend of nitrogen-rich ‚Äúgreens‚Äù and carbon-rich ‚Äúbrowns.‚Äù Technically, the ideal ratio for these is 30 parts carbon for every one-part nitrogen by weight.

However, it‚Äôs unrealistic to expect perfection. After all, you‚Äôll likely be composting whatever materials you have on hand.¬Ý

If you aren‚Äôt sure whether you‚Äôve managed to blend a reasonable amount of carbon with nitrogen, your compost will offer up some olfactory clues. A pile that smells strongly of ammonia‚Äîthink matted grass clippings on a hot day‚Äîhas too much nitrogen.

Just do your best to include as diverse a mix of compostable materials as possible. And, to ensure more even distribution of heavier, wetter items like melon rinds, chop these before adding them in.

Read more: Use worms to break down kitchen scraps into nutrient-dense compost.

Along with its carbon-to-nitrogen ratio, the moisture content and porosity of your compost pile matter, too. Compost should be uniformly moist but not sopping. A pile that is too wet will break down anaerobically. It is also more likely to smell ‚Äúoff.‚Äù

To gauge its moisture content, grab a handful of material from the pile and squeeze it in your fist.

To be certain, test more than one section within the pile. If you find a series of alternately wet and dry areas, you might need to more thoroughly mix your ingredients.

And, when it comes to creating space for oxygen to move within and throughout your pile, bulky materials like dried leaves, straw and even small amounts of shredded paper can be invaluable.

So, if after performing the squeeze test you determine that your compost is too waterlogged, you may want to add some of these. Just keep in mind that, because these are typically very carbon-rich, they‚Äôll skew your overall carbon-to-nitrogen ratio.

Measuring the temperature at the center of your compost pile will further help you to determine whether your pile is likely decomposing aerobically or not. Made with extra-long probes and moisture-proof faces, most compost thermometers are designed to be left in place long-term.

If you‚Äôre starting a new pile or recently added or turned your material, the temperature at its core may run anywhere from 80 to 100 degrees F for the first few days. Next, with a respectable carbon-to-nitrogen ratio, adequate moisture and decent airflow, your compost should really heat up.

During this ‚Äúthermophilic‚Äù phase, its internal temperature can reach up to 150 degrees. Pile size, makeup and moisture levels will determine how long it stays in this hot state.

An internal temperature that has gone back down to the 80- to 100-degree range may indicate that the center of the pile has become too dry or that it‚Äôs time to turn the compost pile. But a change in temperature shouldn‚Äôt be your only indicator.¬Ý

Take a peek at the center of the pile. If it looks dark and crumbly, it may be time to move what‚Äôs on the outside edges of the heap to the center and rearrange what‚Äôs in the center back out to the edges.

How often you turn your pile‚Äîand the method you use to turn it‚Äîalso can have a positive or negative environmental impact. For example, to produce compost at scale, many large commercial compost farms rely on fossil fuels to power heavy equipment for shredding and moving raw materials, as well as turning, finishing and delivering compost.¬Ý

According to Steven Wisbaum, founder of the Vermont-based Champlain Valley Compost Co., ‚ÄúThe amount fossil fuel consumed during the various steps of the composting process will impact its ‚Äònet‚Äô carbon footprint.‚Äù¬Ý

Obviously, turning your own small pile with a pitchfork and some elbow grease is a zero-emissions activity. Even so, in his work, ‚ÄúIn Defense of the Pile Less Turned: A Case for ‚ÄòLow-Input‚Äô Composting,‚Äù Wisbaum suggests turning too frequently can be counterproductive.¬Ý

‚ÄúMost of the oxygen added to a pile during turning is used up by the microbial populations within hours, or even minutes of turning,‚Äù he writes. ‚ÄúTherefore, unless additional oxygen is being provided under pressure (i.e., via ‚Äòforced aeration‚Äô) or a pile is turned hourly, the purpose of turning is not to add oxygen.‚Äù

Instead? Turning improves a pile‚Äôs porosity. In other words, it creates additional space for oxygen and carbon dioxide to move throughout the compost.¬Ý

‚ÄúIf turning is being done primarily to restore porosity and keep the decomposition process moving at a moderate pace,‚Äù he writes, ‚Äúturning can be timed to occur after internal temperatures have dropped 20 to 30 degrees Fahrenheit from a high of 131 to 145 degrees Fahrenheit.‚Äù

As you pay close ‚Äî or closer ‚Äî attention to your compost, you just may find that you‚Äôre generating nutrient-rich compost in a matter of several weeks rather than months. Better still, you‚Äôll have kept all of that material out of your local landfill.¬Ý

And, if you limited methane and carbon release in the process? ‚ÄúReducing methane emissions is really the key lever to slowing down the rate of warming in the near-term with the benefit of also helping in the long-term,‚Äù Ocko says.

‚ÄúAnd CO2 is kind of the opposite. It‚Äôs the main lever in that, if we reduce emissions of CO2, that‚Äôs our best chance at having a better climate in the long-term.‚Ä¶ They definitely feed off of each other.‚Äù ¬Ý

This article originally appeared in the September/October 2021 issue of¬ÝHobby Farms¬Ýmagazine.