An innovative food and community complex that will unite local farmers and food producers is set to open in Louisville, Ky., in 2017. 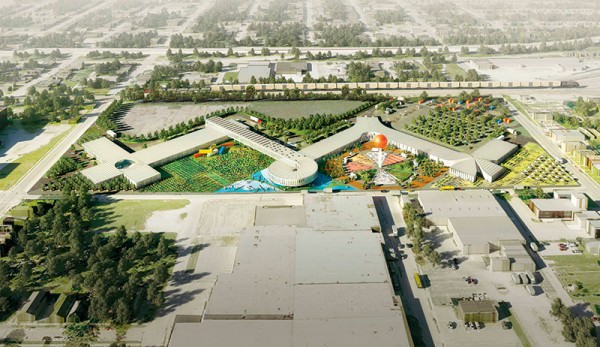 Seed Capital KY, a nonprofit organization in Louisville, Ky., is developing a dynamic system to grow its state’s economy, to increase business for regional farmers and to expand consumer access to locally grown food, especially in its most underserved urban neighborhoods.

The idea for what is now called the West Louisville FoodPort began in 2014. The new hub would specialize in the aggregation and distribution of food on an abandoned 24-acre site in West Louisville where National Tobacco Co. once stood. Today, the FoodPort is designed to be more than a hub; it’s aimed to become the most innovative food-distribution complex and community-revitalization project in the country. The FoodPort will become a local food park, aggregating food and relationships. It will align businesses, farmers and consumers as partners, all in a single community space. Seed Capital KY states that “The West Louisville FoodPort is poised to become one of the most transformative urban reinvestment projects of the decade.”

More Than A Food Hub

The traditional food hub model specializes mainly in aggregation and distribution. According to the USDA, “food hubs make it possible for many [small] producers to gain entry into new larger-volume markets that boost their income and provide them with opportunities for scaling up production.” As sole entities, many hubs specialize in what foods and products they distribute, and many exclude individual consumers, selling products to businesses such as grocery stores and healthcare facilities instead.

FoodPort project manager Caroline Heine, of Seed Capital KY, says that the FoodPort has evolved beyond a food hub model; it’s now designed to be a “local food industry cluster.” It will bundle local food businesses and growers on one property, where they can share practices and suppliers and increase demand for produce and products directly from regional farms. In turn, farmers will be able to partner with wholesale and consumer markets more easily.

Additionally, and unlike a hub, the FoodPort will be a center for community activity in West Louisville. Heine says it will be “a destination where many people are coming to buy food, or have a meal, or come to events, or come to work.”

Beyond aggregating, packaging and distributing, Louisville’s FoodPort will provide community classes in gardening, nutrition and cooking; its tenants will include distributors, processors, educators, startups and vendors; two onsite plazas will be home to play spaces for children and community walking paths, with enough space for farmers markets, concerts and other community events. Sustainability plans include solar power, geothermal energy and rainwater collection for irrigation of its 2-acre demonstration garden.

The FoodPort created immediate buzz among local food advocates, urban farmers, small-scale farmers and sustainability activists eager to nudge Louisville’s locavore food movement into a more mainstream, inclusive food culture. This Southern city has rich food traditions, but near its heart is one of the driest food deserts in the nation.

West Louisville is an area of high need: for business, for employment, for income and for access to nutrition. Just west of downtown Louisville’s skyscrapers, 60,000 people live in the nine distinct neighborhoods of West Louisville. Centrally located, the Russell, Portland and Shawnee neighborhoods meet near the FoodPort site at 30th Street between W. Market and Muhammad Ali Blvd. High unemployment and poverty feed crime in this part of the city, discouraging new businesses that might open to sell fresh foods. The city has made the state’s SNAP benefits spendable at farmers markets to help ease the need for fresh food in its food desert, but the locations of many farmers markets make them inaccessible to those without reliable transportation.

Between 2012 and 2013, a study sponsored by Seed Capital KY quantified the state’s unmet demand for local food to be worth an additional $350 million per year for its farmers. However, Heine says that to quantify the amount of food being produced by independent farmers that isn’t reaching consumers is much more difficult.

“I think we’re going to learn a lot as we open the FoodPort and create a better infrastructure for distributing local food, and better information flow to local farmers so they know what they should grow to meet demand,” Heine says.“We expect that other businesses coming [to the FoodPort] will grow with opportunities for more farmers to come in. In addition to that, we’ll have regular onsite farmers markets.” In addition to produce, Heine expects animal products to be aggregated and sold onsite, as well.

“The farmers we have on board with the project are coming to the FoodPort through relationships they already have,” she says. “For example, we have a produce wholesale distributor coming in,” Heine says. That distributor is Piazza Produce; it’s a business that Heine says has been growing by double every year for the last five years. “It’s a go-to business for locally sourced produce and value added product, so they have relationships with lots of farmers. Those farmers will come with them into the FoodPort.”

A juicing company has also partnered with the FoodPort and will bring its contracted farmers to the FoodPort, as well. “Once the produce distributor and the juicing company are working out of the FoodPort,” Heine says, “those relationships can start to merge or be aligned,” meaning the businesses can share resources, including suppliers.

Seed Capital KY envisions the FoodPort being much bigger five or 10 years from now than it will be when it opens in October 2017. “We see lots of businesses on the property clustering together and bringing foods to the community, building it so it can grow.” Heine also expects to see a robust market on the site, with ongoing opportunities for daily markets and smaller businesses growing at the site, “especially businesses that can be operated by people living in West Louisville,” she says.

The FoodPort project is funded by federal grants, private foundation grants, individual donors and new markets tax credits. Seed Capital KY and its design team are still revising plans for the FoodPort to align with budget changes and community involvement. Still, Seed Capital KY expects that “the FoodPort will unite Louisville with a state-of-the-art landmark that spurs economic activity in a historic, but under-invested, section of our city,” according to its website.
Later this summer, 125,000 square feet will be prepared for construction, while the rest of the site’s 24 acres awaits remediation. The projected cost of the FoodPort is $31 million. It’s a large investment in the community and in a food system so modern that it still doesn’t exist.

Many hubs serve wholesale markets, such as school systems and medical facilities, rather than individual consumers. Traditional food hubs function as sole entities, whether they’re registered as nonprofits or as for-profit businesses. Products that hubs aggregate, package and distribute can vary widely from hub to hub and from region to region. Here’s a small sample of that diversity.