Photo by MSU Ag Communications/Kat Lawrence Honey bees forage on flowers, such as henbit, about a month earlier than usual due to warm winter temperatures. This year’s unseasonably warm winter weather could create a food shortage for honey bees. Beekeepers in many states have been asked to monitor their hives for signs of starvation. Normally, […] 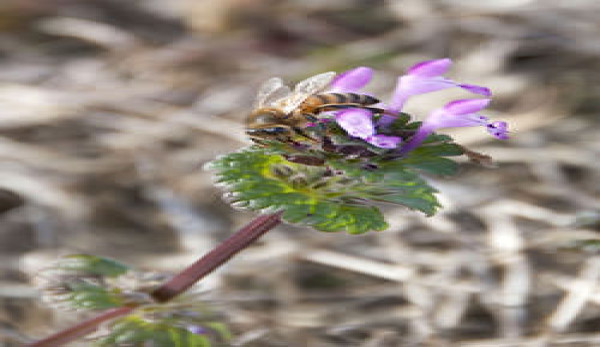 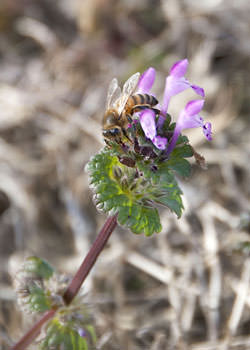 Honey bees forage on flowers, such as henbit, about a month earlier than usual due to warm winter temperatures.

This year’s unseasonably warm winter weather could create a food shortage for honey bees. Beekeepers in many states have been asked to monitor their hives for signs of starvation.

Normally, when temperatures are low, the bees stay huddled together in their hive until the outside temperature is 54 degrees Fahrenheit or higher. Because the outside temperature has hit that mark early, queens have started to lay their eggs earlier than she normally would, and bees have headed out in search of food for the brood (the egg, larva and pupa stages of a bee’s lifecycle). Because it is still winter, sudden drops in temperature can still happen, causing the flowers that would normally be blooming as temperatures get warmer, to remain dormant. It takes sustained warm weather and a lot of sunshine for most flowers to produce nectar. This leaves the bees with little to no food to bring back to the hive. According to Audrey Sheridan, research associate in Mississippi State University’s Department of Biochemistry, Molecular Biology, Entomology and Plant Pathology, says, “With an increase in the demand for food, the bees are flying more to forage, and since there is little nectar available, theyâ€™re rapidly consuming honey. They could easily run out of honey before the spring nectar flow begins.”

In Mississippi specifically, colonies in the central and northern parts of the state don’t collect enough nectar to sustain themselves until mid-March, according to Harry Fulton, former state entomologist with the Mississippi Department of Agriculture and Commerce and secretary-treasurer for the Mississippi Beekeepers Association.

Signs of starvation include the body fluids from the brood having been sucked out by the colony in order to save it. The brood can also die due to cold temperatures because the colony didn’t have enough energy to keep it warm. Also, if a bee is starving, there isn’t enough energy to use the muscles that power its wings, so they won’t go out and look for food.

The Kalamazoo Bee Club recently sent out a notice to local beekeepers, telling them that, if bees have moved to the top of the hive, they need food right then and there. Suggested options for feeding them are: 2 cups sugar syrup to 1 cup hot water, granulated sugar sprinkled on top of the frame, or marshmallow fondant.

â€śWith such a warm January and February, it looks like beekeepers in central and north Mississippi are in for a great year if they can keep their colonies fed and healthy until April,â€ť Fulton says.