For Hardy Dairy Goats, Look To The Swiss Alps

Sweet, hardy and productive milkers, these Swiss misses are must-haves for your farm’s goat dairy. 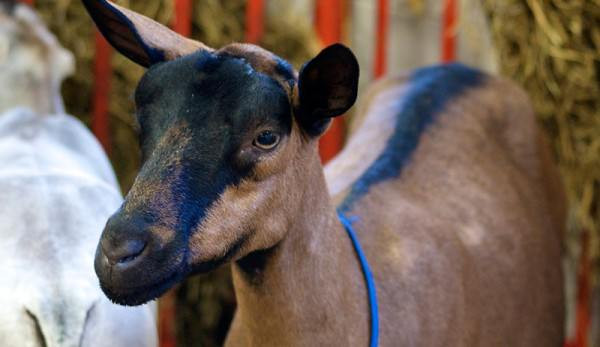 The high Alps of northern Europe might be beautiful, but for animals, it’s a harsh place to live—the air is thin and plant life is scarce. Cold and rocky, the terrain demands a rugged surefootedness. It takes a hardy creature to survive in this kind of environment. Thousands of years ago, goats wandered the Alps, adapting to the climate and the landscape. They became hardy and agile and proved valuable livestock for the people who called this part of Europe home.

The descendants of those goats are still with us today as breeds known for their excellent milk production and good temperaments. The Alpine, Oberhasli, Saanen and Toggenburg are all suitable breeds for small farms and for those just getting started in goats.

The Alpine is the product of European breeders, who started selectively breeding goats for milk production and coloration hundreds of years ago. Goats were eventually taken on ships to various ports to provide milk and meat for sailors, and as a result, the Alpine goat is found in many places around the world.

The French Alpine was first imported from Paris to the U.S. in 1922 by goat fancier Dr. Charles P. Delangle. Delangle brought 22 Alpine goats to his farm in California to start a breeding program. His efforts were short-lived due to poor health and political problems within the goat industry; nevertheless the breed was successfully established. Today’s French Alpines are descendants of Delangle’s original French herd.

Both French and American Alpines come in a variety of colors and patterns, including cou blanc (white front quarters and black hindquarters with black or gray markings on the head), cou clair (front quarters are tan, saffron, off-white, or shading to gray with black hindquarters), cou noir (black front quarters and white hindquarters), sundgau (black with white markings) and pied (spotted or molted). Their hair is medium to short, and bucks stand approximately 32 inches at the withers and weigh around 170 pounds. Does are 30 inches tall and weigh 135 pounds. The Alpine’s ears are upright, and the face is straight. The breed’s overall appearance is alert and graceful.

The Oberhasli is distantly related to the French Alpine and was originally known as the Swiss Alpine for where it was developed, before being officially recognized in 1979 by the ADGA.

The Oberhasli was first imported to the U.S. in 1906. The breed was nearly lost due to outcrossing to French and American Alpines. It wasn’t until 1976 that a group of goat fanciers united to save the breed from extinction. The Oberhasli Breeders of America still exists today, along with the newer Oberhasli Goat Club.

The Oberhasli’s color is one of the breed’s most treasured characteristics. The coat is a rich red-brown with distinct black markings that include a dorsal stripe, a black belly, black legs, and black facial -markings and ears. Some are born solid black, but the bay coloration is greatly preferred.

The Oberhasli is registered by the ADGA, which maintains the breed standard. Male Oberhaslis stand approximately 30 inches at the shoulder and weigh 175 pounds, while does are 28 inches tall and weigh 120 pounds. They have an alert appearance, with a slightly dished or straight face and upright ears.

Oberhaslis are known for their high-quality milk, which has a slightly sweet taste without high fat content, and are considered a rare breed by The Livestock Conservancy and is listed as Recovering on its Conservation Priority List.

The Saanen, another goat that hails from Switzerland, is believed by some experts to have descended from the French Alpine, due to similarities in conformation and temperament. Unlike the French Alpine, the Saanen is almost exclusively white.

The breed originated in the Saanen Valley, where it was cultivated by farmers who appreciated its excellent milk. In the early 1900s, the first group of Saanen was imported to the U.S., and the breed quickly became well-known among American farmers for milking. The breed’s all-white color, large size and hardy constitution contributed to its popularity.

Today, the Saanen is registered by the ADGA and the AGS and is represented by the National Saanen Breeders Association. The largest of all dairy goats, bucks can stand as tall as 35 inches at the shoulder and weigh 160 pounds, while does are 30 inches and 135 pounds.

The Saanen has a straight or dished profile, with ears that are medium to large and held erect and alert. White is the preferred color, though some Saanen come in cream, as well.

First imported from Switzerland to America in 1883, Toggenburgs arrived in the states before other northern European breeds and are considered the oldest goat breed in the U.S. In the years that followed, large numbers of Toggenburgs were imported to the U.S. from England, where it was known as the first recognized dairy-goat breed in the U.K. In the U.S., the breed has been registered by the ADGA and AGS for decades. The National Toggenburg Club promotes the breed with shows and other events.

Toggenburgs acquired some fame in the 1960s when the breed became a favorite of poet Carl Sandburg. His wife raised Toggenburgs at their farm in North Carolina, and produced a doe that broke the world Toggenburg record for milk production in 1960.

The Toggenburg is solid brown, which varies in hue from light fawn to dark chocolate. White markings are always present and include white ears with a dark spot in the middle, two white stripes down the face from above each eye to the muzzle, and markings on the legs.

The breed is among the smallest of dairy goats, with bucks measuring at least 28 inches at the withers and weighing 145 pounds. Does stand 26 inches and weigh 120 pounds.

For hobbyists seeking hardy, easy-to-handle dairy goats to raise on a small farm, the northern European breeds are a perfect choice. Their beauty, size and gentle nature are only surpassed by their ability to provide plenty of wonderful milk.