For The Love of Nutmeg

Prized around the world, this spice has both culinary and medicinal value. 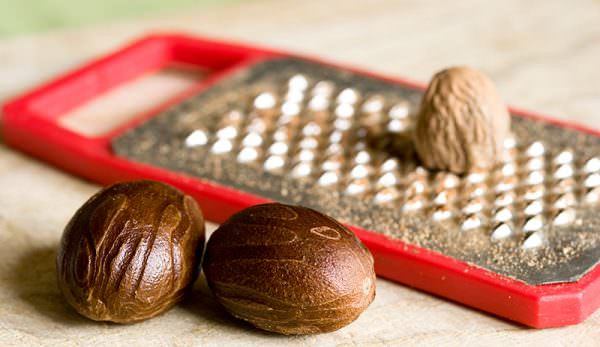 I am a big fan of eggnog. Iâ€™d have it all year long if it wouldnâ€™t ruin how special it is to have it around the holidays. I make mine with raw milk, and while that makes it pretty amazing, itâ€™s the nutmeg on top that really sets this delicious drink apart.

There is so much more to the story of nutmeg than you may know. It is such a strong spice that it is used sparingly, and therefore, I think it can be easily overlooked.

Nutmeg (Myristica fragrans) is one of those plants that changed the course of human history. Our desire for itâ€™s flavor and itâ€™s ability to quicken our senses and our desires made us sail the world. Nutmeg and its sister spices established trade routes, incited violence, and raised and toppled empires. It probably entered Europe in 1 AD, where its primary use was as a medicine. It would go on to enter the cuisine of traditional societies on almost every continent.

Nutmeg appears in recipes for baking, drinks, meat dishes, spinach and mushrooms, cheese dishes, and sauces like bĂ©chamel. The fruit of nutmeg is prized in the places it grows and is often candied, pickled, and made into jelly and syrup.

Nutmeg is a large evergreen tree found in Indonesia. It grows to be between 30 and 70 feet tall with long, glossy leaves. Even with the early European fascination with transplanting exotic species around the planet, it still primarily grows in small Indonesian islands, such as the Banda Islands. The tree prefers the high humidity and sandy soils of the tropics.

At around 9 years of age, the tree begins to produce yellow fruits that reveal a single seed when split open. This seed is enclosed by a husk and a red aril, which looks like a red candle has been melted and run. The red aril is part of what makes nutmeg specialâ€”it is what we know as mace. In fact, nutmeg is the only plant that produces two spices. The aril is removed and the seed dried. When the husk is removed we are left with the nutmeg seed.

Nutmeg contains 15 chemicals with antibacterial action, according to botanist James Duke. He suggests it might be beneficial in the quest to prevent body odor, which is good to know if you make your own deodorant! Around the world, the spice is most commonly employed for digestive issues. Nutmeg has been listed as a Chinese medicinal since 600 AD, and it is a featured remedy in Ayurveda as a topical anti-inflammatory, for insomnia and incontinence, and as a warming digestive tonic.

Externally, both the spice and its essential oil have been used for toothache, eczema and arthritis pain. Among its main constituents are safrole and myristicin, which is a hallucinogenic. In fact, there is a bit of lore around nutmeg and the danger of its ingestion. The truth is that too much of it can lead to severe headache, nausea, dizziness and delirium. The first recorded case of poisoning was in 1576, when reportedly a pregnant woman ate 10 to 12 of the fruits and became incredibly drunk.

Itâ€™s not likely that anyone is going to eat enough nutmeg to be deadly, but one can overdo it. Pets are more likely to be in danger, as they are lured by the sweet spiciness of nutmeg and can experience more severe consequences. It is best to keep this spice out of the reach of pets and small children.

Food Network chef, Alton Brown, is known to keep a nutmeg seed in his pocket at all times. I think this is for good reason. There are culinary and health reasons to use this spice on more than just our Christmas eggnog. Although we arenâ€™t likely here in the Northern Hemisphere to get a fresh nutmeg fruit off the tree, the next best thing is to grate the seed ourselves. If you want the best of what nutmeg has to offer, pick up a nutmeg grater and a small bag of seeds at the after-Christmas sales and get ready to make merry for the New Year!