For This Veteran-Turned-Urban Farmer, It All Started With A Lemon Tree

A discovery of fresh, backyard-grown fruits led Kelly Carlisle to take her newfound garden knowledge to the streets of Oakland. 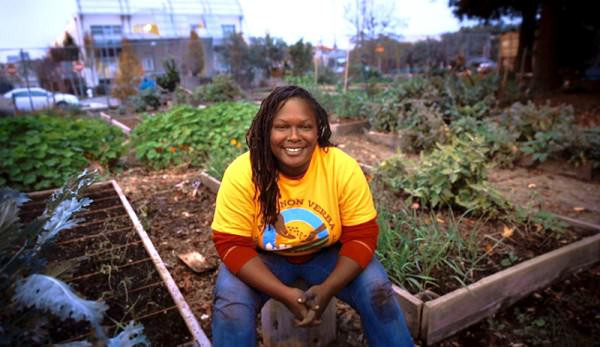 When Kelly Carlisle was stationed on the USS Essex as an operations specialist with the United States Navy, the food she ate in the mess halls came from cans and boxes, not farms.

Carlisle was on active duty from 2001 to 2005. During that time, her focus was on ensuring safe navigation of the ship through the waters off the coast of Japan; the California native didnŌĆÖt give a second thought to where her food came from.

ŌĆ£Growing up, my parents had a garden and I thought they were weirdoes,ŌĆØ she recalls. ŌĆ£I had never thought of growing my own food.ŌĆØ

In 2008, Carlisle changed her mind when she saw a lemon tree in a garden center and discovered the fruit clinging to the branch was real. Until that moment, the California native had no idea lemons grew on trees.

ŌĆ£I had never noticed them before,ŌĆØ she explains. ŌĆ£The idea that you could grow your own lemons in your own space was mind-boggling. I bought the tree, planted it [in a stainless steel garbage pail on the patio] and dared it to grow another lemon. It did and I was in love.ŌĆØ

Although Carlisle was thrilled to grow the lemon, she didnŌĆÖt want to eat it. She didnŌĆÖt think it was safeŌĆöand neither did her father who, despite squeezing fresh lemon into his tea each morning, preferred to purchase the fruits at the supermarket.

ŌĆ£We felt like if the USDA didnŌĆÖt look at it and it didnŌĆÖt come with a little sticker with a barcode on it, it couldnŌĆÖt be real food,ŌĆØ she recalls.

CarlisleŌĆÖs success growing lemons, however, inspire her to experiment with other foods.

During a second stint in the militaryŌĆöserving in the Navy Reserves from 2010 to 2013ŌĆöshe continued adding to her backyard orchard. Before long, the patio of her Oakland apartment was filled with fruit trees, all growing in stainless-steel garbage cans (which were cheaper than traditional garden pots). Along the way, she earned Master Gardener certification and started eating her harvests.

Around the same time Carlisle was nurturing fruit trees, news reports were painting a bleak picture of Oakland, which had been ranked one of the most dangerous cities in the U.S., with rising dropout and teen-prostitution rates.

The Navy veteran was disheartened about the struggles in her community and believed food was the answer.

In 2011, Carlisle partnered with the Oakland Parks and Recreation department to access a quarter-acre space for a farm, which she dubbed the Acta Non Verba – Youth Urban Farm Project. The name, which is Latin for ŌĆ£deeds, not words,ŌĆØ reflected her goal of taking action to improve her community.

The goal: Transform a space in the middle of a food desert into a thriving farm where local children could learn about farming and the local community could benefit from improved access to fresh, affordable, healthy foods.

Carlisle recalls one little girl who was shocked that beets came from the ground, not as pre-cut discs in a can.

A portion of the produce grown on the farm, which ranges from tomatoes and salad greens to purple cauliflower, is reserved for residents of the housing projects adjacent to the farm. The produce is sold at a discounted rate of $15 per bag. (The retail price for CSA shareholders is $25.)

All of the proceeds from the farm sales go into ŌĆ£development accountsŌĆØ designed to help the children go to college.

In the beginning, Carlisle tried to send free CSA shares home with the kids, but most of the produce came back, uneaten.

Carlisle understands. After all, she once refused to eat the lemons growing on her own trees.

Now that she has more experience growing food, Carlisle is proud of her career as a veteran-turned-farmer and hopes that others will find the same empowerment in growing food that she has.

ŌĆ£Our food system is such a delicate balance and farming is such a noble thing to do,ŌĆØ she says. ŌĆ£Urban farming can create important economic opportunities in underserved areas and help improve the health of our communities.ŌĆØ