Photo by Audrey Pavia Mr. Molly and Bobbi Jo sneak off for some alone time. There’s one thing I like more than the eggs I get from my chickens — watching the daily drama of their lives. My flock puts Telemundo’s novelas to shame. The most interesting plot line among my birds concerns one of […] 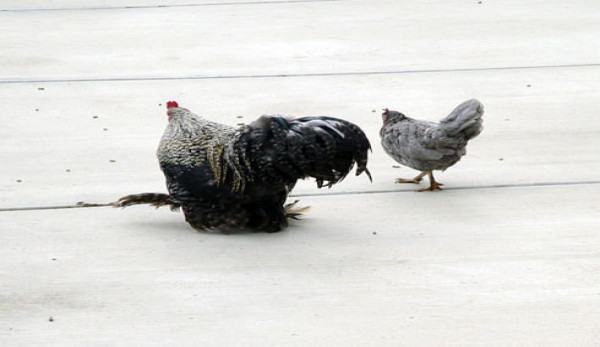 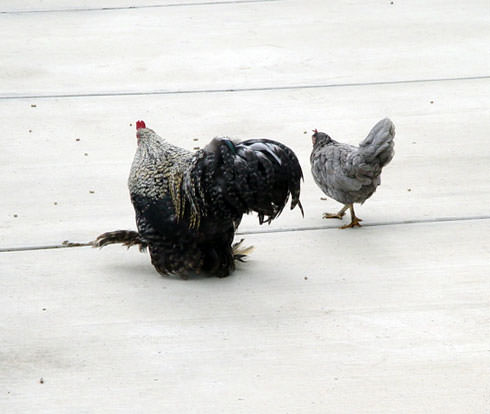 Mr. Molly and Bobbi Jo sneak off for some alone time.

There’s one thing I like more than the eggs I get from my chickens — watching the daily drama of their lives. My flock puts Telemundo’s novelas to shame.

The most interesting plot line among my birds concerns one of my roosters, Mr. Molly, and one of my blue leghorn hens, Bobbi Jo. Mr. Molly is the subordinate rooster, playing second fiddle to his much more macho and assertive brother, Mr. Mabel. Since Mr. Molly is not the top cock in the flock, he is not allowed to mate with any of the hens; That privilege is reserved for Mr. Mabel.

Just because nature has determined that all the hens belong to Mr. Mabel, it doesn’t mean the hens necessarily agree. Bobbi Jo clearly has a preference for Mr. Molly.

Bobbi Jo’s attraction to Mr. Molly is no secret to Mr. Mabel. While Mr. Mabel is spending the day looking for food for his girls, watching for predators, and strutting around like he owns the place, he’s also forced to keep one eye on Mr. Molly and the unfaithful Bobbi Jo.

The way it happens is insidious: The flock will be together, moving around the yard, scratching for bugs or taking dust baths in the planter. At some point, Mr. Molly wanders off, just out of sight of Mr. Mabel. Bobbi Jo follows after him, but only when Mr. Mabel is distracted by something and doesn’t have his eyes on her.

When Mr. Molly and Bobbi Jo are out of Mr. Mabel’s sight, they do the wild thing. Sometimes they get away with it, but many times they don’t. It usually doesn’t take long for Mr. Mabel to notice that Bobbi Jo is missing. Once he realizes Mr. Molly is also gone, he starts running around the yard trying to find them.

If he catches the two renegades in the act, the feathers start to fly. Mr. Mabel launches at Mr. Molly, who runs for his life. Bobbi Jo then trots back to the flock, where she blends in with her look-alike sisters and plays innocent.

I’ve often wondered why Bobbi Jo prefers Mr. Molly. I noticed the attachment between them the spring after Mr. Molly was overthrown as head rooster. The year before, Mr. Molly had challenged Mr. Mabel’s authority and became the boss man after landing a well-aimed peck at Mr. Mabel’s left eye. Mr. Mabel cried uncle, and Mr. Molly was the rooster in charge for the rest of that year. When Mr. Mabel took back his crown the following spring, Bobbi Jo clearly decided that she preferred having Mr. Molly as a mate, despite the outcome of that battle.

Ever since then, Bobbi Jo has been sneaking off regularly with Mr. Molly. During Mr. Molly’s tenure as leader, one of the Jos gave birth to a chick, the now fully grown Baby Jo. Perhaps that hen was Bobbi Jo, and maybe that is why she still has a thing for Mr. Molly. He may be the father of her child!

All this chicken drama is quite silly, but like soap operas, it’s a great diversion from everyday life. I can’t wait to see what unfurls in the next episode.