4 Emotions Chickens In Your Flock May Be Feeling

Though it may sound crazy, most keepers will confirm that their chickens feel emotions. Here are four feelings your birds may experience. 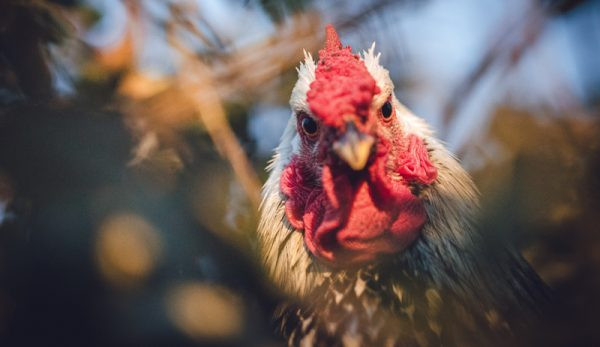 CJ was absolutely terrified the first time I lifted her out of her brooder. At six weeks of age, the little blue Orpington pullet was fully feathered. I wanted her and her clutchmates, TJ and Margie, to experience “real life.”

Our birds go from brooder to tractor to coop. It was time for them to feel grass and sunshine, discover bugs, and explore a larger space.

Oh, how she screeched! She tried to hide under her perch, under her mom, under her brothers. She carried on and on (as did her siblings) and spent her first day in the tractor huddled beside Mama Natalya. And the second day.

On Saturday, she actually started wandering around the tractor, although she still shrieked and ran evasive patterns when I went to retrieve her at dusk. Today, CJ hopped into my hand and trilled happily to herself as I carried her outside. When we got to the tractor, she sat on my palm for a moment, trilled a little more, then eagerly jumped down and started foraging in the grass.

Welcome to the wonderful world of the emotions of chickens!

While many of us are aware that companions such as dogs and cats exhibit a wide range of emotions, the fact that chickens are intelligent, emotionally sophisticated animals surprises many poultry farmers. The fact that the broilers being sent to the slaughterhouse experience complex feelings may be met with skepticism, denial or at the very least a raised eyebrow.

Those with backyard flocks, however, will readily attest to their chickens displaying emotions such as hunger, fear and contentment. But chickens feel much more than that.

Avoid these 6 factors that can cause your chickens stress.

Like humans and other mammals, chickens are capable of experiencing frustration. Something might be blocking access to their destination of choice, for instance. Or something they have been tracking disappears from sight.

Our Buff Orpington hen, Flapjack, would become highly frustrated when she had to lay, only to discover her favorite nestbox occupied by likewise-driven flockmates.

She wouldn’t just climb in and smush together, like the other girls. She would pace back and forth near the nestbox, feathers ruffled, until all of them vacated the box. Similarly, over the years I’ve watched our ranging chooks stalk crickets, frogs, snakes and other outdoor critters, then pace back and forth, extremely agitated and feathers bristling, next to a rock, log or burrow where their prey took shelter.

In fact, frustration was one of the most recognizable emotional states observed in chickens by undergraduates participating in a University of Adelaide research study.

Chickens are able to pick up social cues from each other and, through these, empathize with a bird experiencing sorrow or other negative emotion. This emotional contagion provides a way for chickens to respond accordingly in important circumstances and situations.

When our Blue Orpington hen, Stormy, was killed by a raccoon earlier this year, her sister and best friend Selene was practically despondent. She took forever to emerge from her coop. Then she would just sit in the coop’s shade, comfort-preening and warbling to herself in low tones.

This behavior continued for days and, during this time, her friends Butters and Fitzgirl would check on her. They paced around her worriedly and chirruped softly, as if reassuring her.

More amazing, however, were the two occasions at which our poultry farm came to a silent halt. At both these times—the burial of beloved roosters Arnold Orpington in 2014 and Claude Orpington this summer—every single one of our flocks simply stopped what they were doing and watched us lay the roosters to rest.

Those birds that ranged actually stood by us in silent contemplation when we buried Claude. They erased any doubts I had regarding whether chickens feel empathy.

These are the top 4 things that can cause some chicken cussing.

According to Dr. Lori Marino of the the Kimmela Center for Animal Advocacy in Kanab, UT, chickens display Machiavellian-like social interactions. This means that within their social structure, they can plot, manipulate,and use deceit to gain personal advantage.

This is frequently observed in flocks with a dominant male and one or more subordinates. A subordinate may bide his time, for instance, waiting until the alpha bird is distracted to call hens to share the tidbits he has located. Then he’ll switch right back to subordinate vocalizations when the dominant bird reappears.

Our Thomas Orpington was a king at scheming in his younger days. He’d supposedly dustbathe, all the while keeping an eye on his brothers Claude and Davey. The second this duo’s attention diverted—usually to one of us bringing out kitchen scraps—Thomas would dash over to the nearest hen. He would have his way with her, then dash to safety the moment Claude and Davey realized what he was up to.

Even sweet little Silkies engage in Machiavellian plotting. Despite being overthrown by his son, Romy, our blue Silkie, Romanoff, never missed an opportunity to court his former hens. And I’m positive our lavender Orpington, Ginger Bean, takes great pride in kicking over the feeders I fill in the morning the moment my back is turned.

A research study conducted by the Swedish University of Agricultural Sciences  demonstrated that chickens react with anticipation to learned cues.

The study taught the hens to differentiate between three sounds. One signaled an edible treat. Another resulted in a squirt from a water gun. A third yielded nothing. Within a short period of time, the hens responded with eager anticipation to the treat cue. But they displayed agitated behaviors such as pacing and flinching head movements for the squirt-gun cue.

Our own flocks have learned cues quite independently. The second they see the kitchen door slide open, they all dash towards the deck, waiting for kitchen scraps. Should they see one of us carrying a white bucket, they immediately swarm us, expecting scratch.

They also tend to flee at the sight of our rakes, making it much easier to clean out their coops.

It’s my hope that CJ will engage in yet another cognitive behavior—social learning — and teach her siblings that my appearance means a day of playing outside, not run in terror. I look forward to the trio of little chickens reacting with positive emotions when I arrive in the morning!