If your love of chickens goes above and beyond, consider a visit to one of these locales that (in name at least) pay homage to our feathered friends. 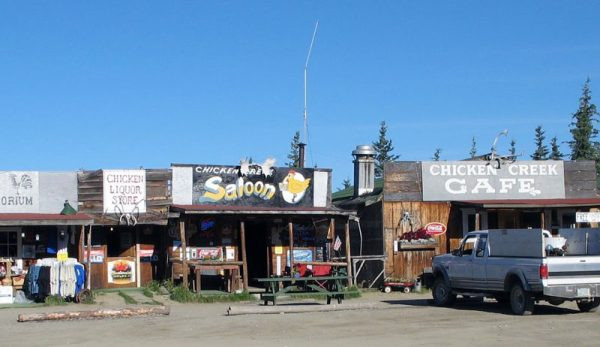 Thereâ€™s no question about it: Those of us who keep chicken flocks truly love our birds. Whether we keep them as pets, raise them for their eggs or meat, breed them to help conservation efforts, or enjoy them as part of the homesteading experience, we all show our avian affinity in a variety of ways.

Still others (yes, myself included) perk up their kitchens with chicken cookie jars, stoneware and teapots. There are so many ways we show our love for chickens. And now, hereâ€™s yet another for the most diehard devotees.

Road trip, anyone? Let’s visit some places with ties (in name, at least) to chickens.

This tiny northern townâ€”population 12 according to the 2020 US censusâ€”is one of Alaskaâ€™s remaining active gold-mining towns.

Founded in the late 1800s, the town of Chicken boasts a post office, gas station, liquor store, cafĂ©, saloon and mercantile, but no electricity or plumbing. The Chicken Historic District, consisting of more than a dozen gold-rush-era structures, can be found on the National Register of Historic Places.

During the summer, the population swells to approximately 100 residents, mostly miners traveling to this Eastern Alaskan outpost via the Chicken Airport (CKX) or by Alaska Route 5 (not maintained during the winter).

Surprisingly, the town was not named for everyoneâ€™s favorite domestic fowl. Don’t visit Chicken expecting to see a lot of chickens.

The settlers noticed an abundance of wild ptarmiganâ€”Alaskaâ€™s state birdâ€”in the area and thought the town should be named for them. Nobody could agree on the spelling of ptarmigan, however. So they named the town Chicken, which everyone could spell.

Ironically, the Fork River (okay, okay, the South Fork River) runs through Chicken. No word on whether a town called Carving Knife is nearby.

Located in the north central region of New Mexico, this tiny townâ€”population 299 according to the 2020 US censusâ€”bears the name of Hen in Spanish. Gallina (pronounced gah-YEE-nah) isnâ€™t particularly known for laying hens, however. Its claim to fame, like its Alaskan cousin, is mining.

Silver, copper, lead and uranium were once hauled out of the earth at the nearby Gallina Mine. Today, the town is a jump-off point for exploring the US Forest Serviceâ€™s San Pedro Parks Wilderness, a 41,000-acre region boasting more than 100 miles of trails crisscrossing grassy meadows and high plateaus.

Coincidentally, the ptarmiganâ€™s close cousin, the grouse, thrives in abundance in this wilderness region. Only a visit will reveal whether the same is true regarding chickens. But who puts a place named for hens next to a town called Coyote?

This scenic roadâ€”also known as Chicken Gizzard Roadâ€”will lead you right over Chicken Gizzard Ridge. The vistas from this 1,030-foot ridge are quite lovely and bear no resemblance to chicken gizzards or any part of a chicken, for that matter.

Looking for another poultry-related locale? Consider continuing slightly further west on Route 70, then turning south onto Speck Ridge Road (Kentucky Route 1752). This will lead you to the town of Feathersburg.

Located in one of the countryâ€™s largest metropolitan areasâ€”Los Angelesâ€”Wattles Garden is home not to wattle-bearing chickens but to 141 avocado-bearing trees. A group of 30 devoted gardeners tirelessly labored to recover these century-old trees. The surrounding acreage from the neglected, overgrown land that was once one of Hollywoodâ€™s earliest attractions.

These gardens were part of the Wattles Estate, which served as the winter home of Omaha businessman Gurdon Wattles. Wattles opened his beloved gardens to the public for everyone to enjoy. But these sadly fell into disrepair after his death in 1932.

In 1975, Mayor Tom Bradley established Los Angelesâ€™ community garden program, and Wattles Garden became one of the first gardens in the city.

Today, approximately 300 members maintain almost 200 garden plots as well as the estateâ€™s original avocado and citrus trees. Wattlesâ€™ Mediterranean-style mansion was recognized as a City of Los Angeles Cultural Monument in 1993 and is now managed by the cityâ€™s Recreation and Parks Department, which maintains a hiking trail through part of the estate grounds.

If any part of the estate grounds looks familiar, youâ€™re not imagining things. Several movies and television shows have been filmed here, including Buffy the Vampire Slayer, Rain ManÂ and Ghoulies.