4 Reasons Why Your Rooster Doesn’t Crow

It can be concerning when a rooster falls (or stays) quiet, but there are some good reasons for your bird to stay mum. 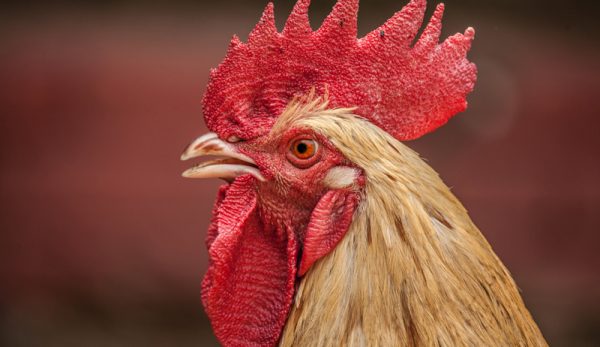 One of the most frequent complaints regarding poultry rearing is the noise a rooster makes. Round-the-clock crowing serves as the primary reason why so many municipalities do not permit the keeping of a rooster.

Even in rural and agricultural zones, residents often file noise complaints against chicken farmers whose roosters are simply behaving the way roosters do. Thank goodness for ordinances that protect a flock owner’s right to farm!

Sometimes, however, a healthy rooster doesn’t crow at all. A bird that previously greeted the sun, the wind, his hens and any insect that crawled or flew by with a hearty cock-a-doodle-do now cock-a-doodle-doesn’t.

Wondering why your boy went silent or perhaps has yet to crow? Here are four reasons why.

Read more: Here are the pros and cons of adding a rooster to your chicken flock.

When our Lavender Orpington, Claude, was injured early this year, he immediately fell silent. It took two weeks of intense rehabilitative work with him, focusing on reteaching him to walk, before I realized he wasn’t making a peep.

I thoroughly examined his neck. Then I watched him eat to make sure he had not injured his throat or vocal chords, something that our local veterinarian confirmed.

Claude’s noisemaker was perfectly fine. He simply was behaving instinctively, staying silent in order to not draw the notice of a predator. An injured rooster cannot hold his own against a swooping hawk or a stealthy fox, nor can he properly protect his hens.

When a rooster doesn’t crow, a rooster believes himself to be more or less invisible and off a predator’s radar.

Roosters that have fallen ill also tend not to crow. But not because they are avoiding predation.

When a sick rooster doesn’t crow, his silence is twofold. First, the energy expended in energetically crowing all day long has been reallocated to battling the bacteria or virus invading his system.

Second, by staying silent while sick, the ailing rooster avoids drawing the attention of the other roosters in his flock, who would happily turn on one of their own if it means reorganizing the pecking order to their advantage.

Even high-rank hens, especially older girls set in their ways, may peck at the poor roo. So mum’s the word for him while he recovers.

Read more: Here are some things you can do when you have a chicken falls ill.

In flocks where the alpha male—and, on occasion, his deputies—is especially dominant or aggressive, a lower-ranked rooster may be the butt of continual bullying and harassment. After repeated “lessons” from the flock boss (and quite possibly his cohorts), the picked-on rooster may simply fall silent out of self preservation.

When our Lavender Orpington rooster, Ginger Bean, overthrew his father, Claude, last year, we temporarily moved Claude in with his brother Thomas and his flock. Thomas treated Claude very well … as long as Claude didn’t make a sound. The moment Claude made the slightest noise, Thomas would tear across the run and peck Claude on the head.

It took a long week of pecking for Claude to learn to keep quiet to save his own skin.

Sometimes when a rooster doesn’t crow, it’s simply because he just has not yet reached that level of maturity. Juvenile cockerels typically crow for the first time between 8 to 10 weeks of age—sometimes sooner, sometimes later.

More often than not, those first crows will be infrequent and will not bear any resemblance to an adult crow.

Our little nine-week-old, Margarine, let out his first crow just last week. He sounded like a small child’s party horn, and he scared himself, his siblings and his mama hen. He has crowed a few times since then, but he won’t attain true adult crow-versations for another couple of months.