Give your chickens year-round access to a natural diet full of plants, bugs and even rodents with these tips. 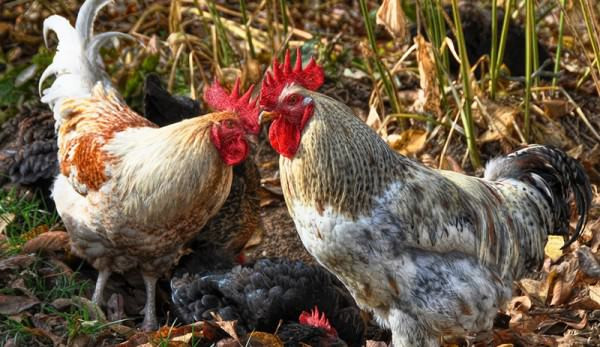 Nutritionism, a concept that writer Michael Pollan has addressed and condemned in his book, In Defense of Food (2009), suggests that individual nutrients, rather than whole foods themselves, can provide a complete diet. Simply, itâ€™s the idea that the nutritional value of a food is only equal to the sum of its presently identifiable parts.

Processed foods, including chicken feeds, often contain synthetic versions of added nutrients, because we tend to value a nutrient itself, rather than the whole of its natural food origin. Foods in their most natural forms possibly contain beneficial nutrients or combinations of them weâ€™ve yet to discover. While chicken-feed labels reinforce the reliability of laboratory nutrition analyses, do the industry standards beat the entirety of known and unknown nutrition in a natural polyculture lawn?

Due to the demands we place on our livestock, like laying an egg every 25 hours, thereâ€™s no disputing the continued need for grain feed: The ideal nutrient formulations are developed to get maximum output from feathered egg machines. But, if we imagine that nutrition is complete in processed feeds, should we assume that grain feed is enough to satisfy a plant- and animal-eating omnivore?

Consuming nutrients is only one reason to eat. The rituals of finding food and the act of eating that we humans enjoy are not lost on chickens. Like a human going out for a steak and a salad, the act of foraging for plants and animalsâ€”foods that birds can smell and tasteâ€”completes the satiating meal experience.

For satisfying diets that nurture the whole chicken, providing access to forage through every season is essential for raising a healthy and happy backyard flock.

As the days grow shorter, chickens have fewer daylight hours to feed and forage, but they still need to produce enough heat to last through longer, colder nights.

As the flock adapts to these changes in preparation for winter, minimal human clearing of the garden will have chickens wild with purpose, turning the soil, clearing it of weeds, unearthing pests, loosening roots and fertilizing the garden as they go. Haul in some compost, and the flock will mix it in for you. Theyâ€™ll munch on some of the organisms that have been multiplying in the warmth of the decomposing pile, but others will survive and contribute to the gardenâ€™s ecosystem.

While mice are year-round pests, fall sends these little mammals looking for warmer locations to nest. With cozy bedding and plentiful grains nearby, a chicken coop is an oasis for a squeaky little mouse. Passive chickens will coexist with small rodents, but an aggressive forager wonâ€™t hesitate to stuff its crop with a mouse. Once it catches the mouse, it incapacitates it by hitting it against the ground, likely killing it, and then the chicken will swallow it whole, like a gull eating a fish. Itâ€™s a horrifying but fascinating sight, and to witness it is an educational lesson in the true nature of the chicken.

A mobile coop or a temporary fenced pen can be placed on top of raised beds and over other garden areas to restrict a flock to a specific place for foraging at the end of the growing season. Simply lure them to the area by turning some soil. Sprinkle some scratch grains if they need convincing.

Because confined chickens are usually kept from the garden, moving chickens to the garden under a protective structure will work the soil and unearth a bounty of cropâ€”damaging pests, such as grubs and even termites, in aging raised beds.

Natural wintertime foraging is either very limited or simply impossible, depending on the flockâ€™s geographic location, but working to decrease the seasonal stress of inactivity, boredom and dry feed rations can make a big difference in their emotional health.

Itâ€™s important to encourage chickens to get out of the coop, too. Idle chickens feeling cooped up for too long can become moody and even aggressive toward flockmates. Boredom in confinement, for some chickens, can lead to cannibalism and result in death. Creating conditions where chickens can satisfy their natural behaviors nurtures the whole flockâ€™s overall well-being.

When the snow is about shank deep, or when the chickens wonâ€™t venture outside in comfortably cold temperatures, shovel walking paths through the yard, but carefully so as not to damage the sod. A flat path will allow the flock to walk on top of the snow and around the yard. Sprinkle kitchen scraps, sprouted seeds, legumes or scratch grains along the trails to simulate the mental and physical exercise of foraging. Living foods will provide a nutrition boost, but feeding scratch grains before dusk will help chickens burn them for increased internal heat overnight.

Winter can be a hungry time, with crunchy beasts in short supply. Freeze-dried mealworms make great fantasy forage to -satisfy the chickenâ€™s inner carnivore. Sprinkle mealworms along a shoveled path, or cast them over fresh coop bedding. Giving the compost a good turn or two every now and then will help break down new additions to the bin before spring, while unearthing the protein buffet living inside. The flock will enjoy this temporary distraction from the boredom of winter.

You can reuse an old window tilted toward the south-facing sun in a cold frame. The temperature inside the frame will stay warm enough to grow grazing greens for the flock through the winter. Just cut fresh greens, leaving them long enough to regrow, and deliver them to the chicken run like grass clippings.

Chickens also enjoy fresh, living greens grown in the kitchen. Sprouting seeds, grains and legumes in the kitchen takes a little time, but in terms of flock enjoyment and supplemental nutrition, growing a quart-size canning jar of sprouts each week demands very little time and counter space. As with other chicken supplements, sprinkle sprouts for active foraging.

As spring blossoms, the chickens will keep the grasses, clover and other greens trimmed nicely until the lengthening days force growth beyond their beaksâ€™ control. Their hard work can even reduce the need to mow the backyard half as often as the front.

While planting gardens and flowers for the growing season, be mindful of plants that are poisonous to chickens, such as the bulbs and greens of daffodils and tulips, and the greens of all nightshades, including tomatoes and potatoes. Protect chickens from these plants until the plants are well-established in the garden. Chickens are trendy creatures, preferring the novelty of new additions and freshly turned earth to passĂ© garden staples that excited them before the last heavy rain.

The insect explosion of spring cues a thrilling game of skill. Chickensâ€™ keen eyesight, especially up close, will have them munching on insects and organisms humans canâ€™t see, and even chasing wasps and carpenter bees. This protein boost to the flockâ€™s diet tends to be in line with the seasonal increase in egg laying, giving backyard eggs and chickensâ€™ active legs a big boost in overall nutrition.

Before planting the garden, put the flock to work. Give the soil a quick turn, and let the flock forage for fresh weed sprouts and pests that have moved in and reproduced as the soil has warmed. This leaves the gardener with little else to do but plant and water the garden.

Landscape the coop by planting a chicken garden around the outside of the run. Patricia Foreman, author of City Chicks (2010), calls this the â€śbrowse line,â€ť where chickens can reach a little of what grows from a plant at a protective distance. Planting crops along the browse line ensures that plenty of food will be shared between you and your flock all growing season. Cucumber, zucchini and tender lettuces are great options.

Summer is a stressful season, especially for heavy breeds, such as Australorps or Brahmas, and feather-footed breeds, such as Cochins. Because the hottest days can be dangerous, chickens need a bit of help getting through the dog days of the season, and access to forage can help.

Chickens often avoid eating because they know that digesting food creates more internal heat, and theyâ€™re already uncomfortable. Creating a place for chickens to relax and literally chill out can relieve unnecessary stress and keep the hens laying eggs through the summer. By allowing a shady part of the yard to go wild with the grass and weeds growing long, the plants, roots and soil will retain more moisture, keeping the entire area cooler than the surrounding air to wick heat away from the chickensâ€™ bodies.

Once chickens can no longer keep up with trimming the grass in their shady forage area, it will go to seed, which is good: Chickens love foraging seeds from the grass tassels. Bugs and insects will also take refuge in this cooler shelter, making it the perfect place for a flock to rest, hide, play and hunt for animal protein.

As the garden matures, sharing produce extras, leftovers or lossesâ€”tomatoes, watermelon, etc.â€”provides nutrition and hydration, and they can be chilled or frozen first to give chickens some relief from oppressive heat.

Female mosquitoes lay eggs everywhere. Itâ€™s where water happens to pool that becomes a skeeter incubator. While chickens donâ€™t seem interested in adult mosquitoes, a backyard flock that is allowed to free-range will greatly reduce the population of mosquitoes in the yard by foraging for their larvae. However, chickens do eat adult ticks, and they can virtually eliminate even the most abundant population in a single yard.

The lawn and its inhabitants are an abundant source of whole foods that contain vitamins, minerals, omega-3 fatty acids, carotenes and protein, among others. Collect grass clippings from your nontreated yard, and serve them up fresh inside the your chicken run. Your birds will forage through the damp clippings for plants and animals. Whatâ€™s left will decompose and disappear into the run floor.

Given the opportunity, the average chicken can eat about 7 pounds of supplemental foods per month, according to Foreman. That means a small flock of five residential chickens can eatÂ 35 pounds of kitchen scraps, yard waste and backyard pests every four weeks. Indulging your chickensâ€™ natural foraging instincts will fulfill more than just their bodiesâ€™ nutritional requirements. With the ability to recycle hundreds of pounds of waste and bothersome backyard pests per year, allowing year-round foraging honors a flockâ€™s desire for joyful eating.

This article originally appeared in the September/October 2016 issue of Chickens.