4 Methods You Can Use to Divide Perennials

Perennials are terrific garden plants. It's easy to divide perennials using one of these techniques. The result will be happier, healthier plants and extras to share with neighbors and friends. 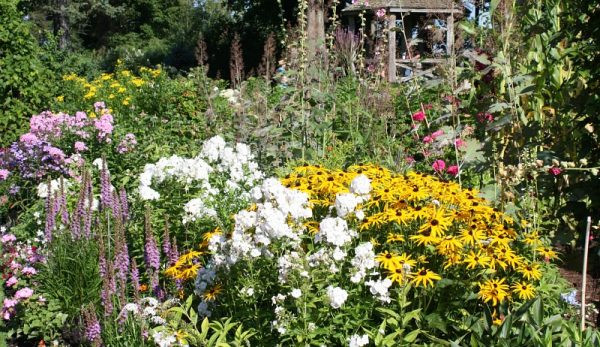 Perennials are terrific plants to include in your garden for many reasons. First and foremost, when they’re fully winter hardy in your gardening zone, they’ll return to the garden for many years, growing bigger and better with each passing season. Many perennials are also relatively low maintenance, demanding little of the gardener in terms of care. Perennials are also useful for budget-savvy gardeners because one can easily divide perennials and make more of them for free. And, well, what pleases a gardener more than free plants?

Why Dividing Perennials Is Important

That said, you divide perennials not only to get more plants, but also to maintain the health and vigor of the “mother plant.” Eventually, clump-forming and spreading perennials can become too large, crowding out neighboring plants as well as themselves. When you see a reduction in flowering or the center of the plant begins to thin out and blooms are produced only on the outer edge of the clump, it’s time to divide. Some perennials need to be divided every three or four years, while others almost never need to be divided. Let the plant be your guide, and watch it carefully for signs of crowding and reduced bloom production.

But, you can always divide your perennialsâ€”whether the above signs are there or notâ€”just to make some free plants for yourself (or a friend). Here are four ways to tackle the job.

When it’s time to either make free plants or reduce crowding, follow one of these techniques to divide your perennials.

What makes this technique so appealing is its speed and ease. There’s not much digging involved with in-place perennial division. Simply head to the garden in early spring, when the tips of perennial foliage is emerging from the crown of the plant, and chop off half of the plant with a sharp spade. There’s no need to dig up the entire plant clump; just chop right through the center of the plant and then dig out the separated half. The portion of the plant that’s been removed can then be chopped into smaller divisions, yielding many free plants instead of just one. The size of each division is up to you; as long as there’s a portion of the root system attached to a portion of the shoot system, it’s a viable division. In-place perennial division works great for lots of spreading and clump-forming perennials, such as phlox, bee balm, daylilies, coneflowers, black-eyed Susans, helleborus and asters, among many others.

This way to divide perennials is a bit more labor intensive because it involves digging out and lifting the entire plant before the division takes place. It’s particularly useful for plants that grow in very dense clumps, such as hosta and ornamental grasses. For thick-rooted, dense plants such as these, getting a spade through the center of the plant is nearly impossible. For whole clump division, once the entire perennial clump has been lifted, you can use a shovel, pruning saw, pick axe or even a chainsaw to cut the plant into separate divisions for replanting. It’s hard work, but well worth the effort.

I find this technique particularly useful for several reasons. It’s the technique I use when dividing perennials that spread via running, underground roots or rhizomes. Root wash division works well when I divide perennials such as iris, bee balm, mint, some goldenrods, plume poppy and lily of the valley. I also use it when dividing thread-leaf coreopsis. Root wash division involves lifting a clump of the plant and using a hose to blast the soil from the roots, leaving the roots bare. Once those are devoid of soil, it’s easy to cut the rhizomes or spreading roots with a sharp pair of pruners to make a bunch of divisions. Then, replant each of the divisions into a new garden post or pot them in pots and share them with friends. You can do this early in the season, when the plants are just thinking about sprouting, or in the autumn, a few weeks before the arrival of fall’s first frost. It works like a charm.

A fourth way to divide perennials is by making root cuttings of the plants. Technically, taking root cuttings is not dividing, but rather another form of plant propagation. Just the same, I include it here because it’s a great way to make free plants. Root cuttings work with almost any perennial that has thick roots. I use it to make more oriental poppies, bleeding hearts, corydalis, hollyhocks, blanket flowers, heliopsis and Japanese anemones, among many others. It’s also a great way to make more shrubs. Here’s how to take root cuttings.

Divide perennials using one of these techniques and continue to grow a happy, healthy, flower-filled garden.