Foxes on the Farm 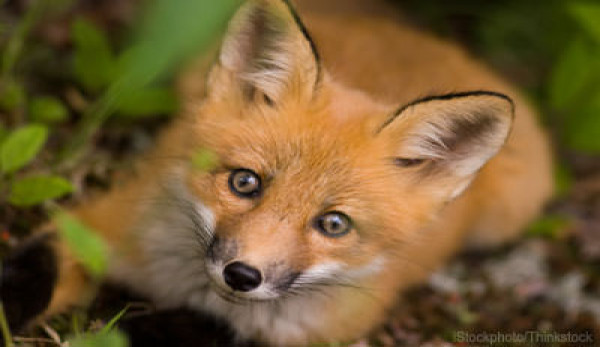 Have you ever watched baby foxes playing? Mom and Dad did when they lived on their farm in Minnesota. Every spring a mama fox raised her cubs in a den near the cabin where they lived. Now foxes are one of Momâ€™s favorite wild things.

Foxes belong to the Canidae family, along with wolves, coyotes, jackals and domestic dogs. There are two major species in North America: red foxes (Vulpes vulpes) and gray foxes (Urocyon cinereoargenteus). Red foxes are leaner and have longer legs, so they look bigger than gray foxes, but both species are about the size of a large house cat. Both foxes have lush fur, long snouts and bushy tails.

Red foxes are usually a tan to reddish color, but you can see them in other colors, too, like melanistic foxes (also called silver foxes) that have white-tipped black fur, cross foxes that have a dark stripe along the spine and shoulders, and all-white foxes. Red foxes of all colors have white-tipped tails. Gray foxes are grizzled gray with buff-colored undercoats and a black stripe along their black-tipped tails.

The word “foxâ€ť is Old English and comes from the proto-Germanic word fukh. Males foxes are called dogs, tods or reynards and females are vixens. Baby foxes are kits, pups or cubs. In old Scotland, tod is a nickname for a clever and wily personâ€”kinda like a fox!

A long time ago, humans associated foxes with intelligence and cunningness. The Dogon people of West Africa considered the pale fox species to be a trickster god (one that doesnâ€™t play by the rules) of the desert, while the Moche of Peru believed the fox was a powerful warrior. In Chinese, Japanese and Korean folklore, foxes are mischievous spirits that take the form of beautiful, seducing women.

Real-life foxes are shy and wary, but theyâ€™re also curious. They usually sleep during the day, but are sometimes out and about in the daytime, too. Like cats, they pounce on their prey. Fox cubs practice by pouncing on grasshoppers and beetles while theyâ€™re young. They are opportunistic feeders, meaning they eat pretty much whatever comes along. They like mice, rats, squirrels, rabbits and birds, as well as eggs, insects, fruit and carrion. They also eat chickens,Â ducks and other poultry, as well as small lambs, kids,Â piglets and kittens if theyâ€™re easy prey. This makes foxes unpopular visitors on many farms.

If you donâ€™t want foxes visiting your farm, secure your garbage in containers with tight-fitting lids, and keep them inside a building if you can. Foxes love to feast on food humans throw away. They also like your petâ€™s food, so feed pets indoors so foxes canâ€™t nosh on their leftover food. Keep your cats and poultry safe by keeping cats indoors at dusk, overnight and at dawn and by building really secure poultry houses and pens. If you think foxes might steal your lambs, kids or piglets, consider adding a guardian animal, such as a donkey,Â llama or guard dog, to your farm-animal family.

On the other hand, foxes help out farmers by eating lots of mice and rats, and Mom says their entertainment value is second to none. She spent many happy hours watching fox cubs frolicking outside their den near her Minnesota cabin, butÂ our friend Feyza keeps them away from our Ozark farm.