Those pampered hens in your backyard can be traced back to domesticated jungle fowl, striking birds historically kept as village poultry around the world. 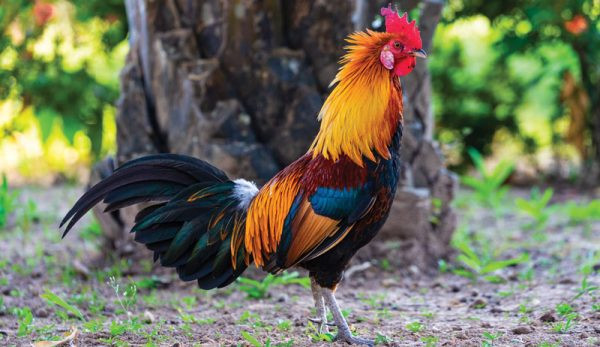 In fact, more chickens exist in the world than any other domesticated or wild vertebrate species in number and biomass. They provide us with food at multiple levels from mega farms to humble backyards all over the world.

Village poultry (i.e., ābackyardā chickens in Africa and Asia) are an essential source of protein and income for millions of people.Ā

The ubiquity of chickens wasnāt always so, though. In fact, until the recent African swine fever outbreak in China in 2018, pigs were the most consumed animal protein on the planet.

The point is that the scope of chicken meat and egg consumption wasnāt always at its present level. So why is this so?

From a historical perspective, humans have only lived in villagesāas opposed to being hunter-gatherersāfor approximately 10,000 years. And chickens have been with us as domesticated animals for approximately 7,000 to 8,000 of those years.

However, the reasons we brought them into our villages are probably different than what we might guess thousands of year later.Ā

Specifically, chickens were domesticated not for dinner purposes but for status, religious ceremony and entertainment (i.e., fighting). In fact, the best fighting birds were often buried with the high-status elders.

From a more practical perspective, roosters were also used as timepieces. Crowing roosters proclaimed the hour of dawn.

Once established in the culture of these emerging societies, various cultures then spread them via migration, trade and territorial conquests to various locations including Europe in 3000 B.C. and South America in 1200 A.D.

One of the reasons chickens were largely ceremonial as opposed to dinner is their appearance. The humble chicken wasnāt so humble back then. It was a smaller, flightier bird with long, colored, beautiful feathers.

In other words, youād want to show it off as opposed to stick it in a barn. You can see the living ancestors to modern chickensāred jungle fowlāwith a trip to modern-day India, Bangladesh or Sri Lanka.Ā

Based on how stunning red jungle fowl appear, it might make more sense why humans would prefer to hunt wild animals. And why they’d keep farm-domestic animals, such as sheep and goats, for milk and meat instead. It somewhat explains why a culture would learn how to farm grains on the same plot of land, too.

Read more: Interested in raising show chickens for poultry exhibition? Here’s how to get started.

There isnāt a lot of research on this, but slowly but surely chickensāand their eggsāwere used as sources of protein and fertilizer. One thing that helped the red jungle fowl become the humble chicken is that it became a prolific egg producerācompared to other birds.Ā

Most birds donāt lay eggs year-round. As an example, ducks only lay eggs in the northern hemisphere between mid-March and July.

In contrast, a chance mutation in the jungle fowl led to hens that can lay eggs close to year-round. This, of course, depends on the breed and amount of light. Interestingly, societies that domesticated jungle fowl were largely equatorial. Hence, a constant amount of light was present year-round to facilitate year-round egg production.Ā

In addition, at some point someone figured out that chicken poop makes an effective fertilizer. As humans were learning to farm, farmers likely figured out that their crops were more productive on fields that contained some level of manure.Ā

Read more: Chickens can bring big benefits to the garden!

Village poultry in Asia and Africa represent an interesting bridge between jungle fowl and the highly domesticated breeds we typically keep today on our farms and in our backyards. The concept of village poultryāindigenous chickens highly adapted to their environmentāis a highly established part of life in most of Africa and Asia.Ā

The village breeds arenāt as productive as conventional breeds. But theyāre typically tougher from a disease-resistance and heat-tolerance perspective. In addition, the heavier commercial breeds often have problems escaping predators, are poor scavengers for feed and show poor broodiness, which is an essential step for creating replacement stock for village poultry.Ā

As backyard-poultry owners, our purpose for having chickens is likely different than what Iāve just described. But itās a useful exercise to understand how other societiesāpast and present ā use chickens. Check out these interesting observations:Ā

Village poultry have incredible diversity. And, from a genetic perspective, they offer an important genetic reservoir/library.

Conservation of jungle fowl and their genetic diversity is a big issue in Southeast Asia for cultural and scientific purposes. Many of these birds have genetics that make them less susceptible to various highly infectious diseases, including avian influenza and virulent Newcastle disease.Ā

Women & children are often the primary caregivers for village poultry. Many microfinance investors prefer to invest in small village-poultry women-run businesses. Theyāre typically more successful and less likely to default on their microloans.Ā

Village poultry typically scavenge for their food and rarely, if ever, receive commercial rations. While this makes them less productive, it does make them highly economical.Ā

In some ways, we may learn that weāre more like our ancestors and our fellow international poultry owners than we think. Backyard birds are similar to village breeds. We use them for decoration/status, food and, unfortunately, fighting. (Fighting is illegal in the U.S. but largely legal and acceptable in many non-Western countries.)

Many of our challenges are similar. Hopefully, the scientific, cultural and historic value of village breeds and jungle fowl will provide valuable insights for all chickens, including our humble backyard birds.Ā

This article originally appeared in the November/December 2021 issue of Chickens magazine. It was written by Maurice Pitesky, D.V.M., and faculty at the UC Davis School of Veterinary Medicine in Northern California.Ā

Maurice Pitesky is a faculty member at University of California School of Veterinary Medicine-Cooperative Extension with an appointment in poultry health and food safety epidemiology. Dr. Pitesky earned his B.S. in biology from UCLA, and his DVM and MPVM from UC Davis. Pitesky is also boarded in Preventative Veterinary Medicine (DACVPM). Piteskyās research interests are focused in mapping of avian diseases, food safety epidemiology and in gaining a better understanding of small scale poultry production with respect to environmental sustainability, poultry health and food safety.