From the Herb Garden: Coriander/Cilantro

Whether you love or hate cilantro (a/k/a, coriander), this controversial herb is also a flavorful, and ancient, winter spice. And its uses go beyond the kitchen! 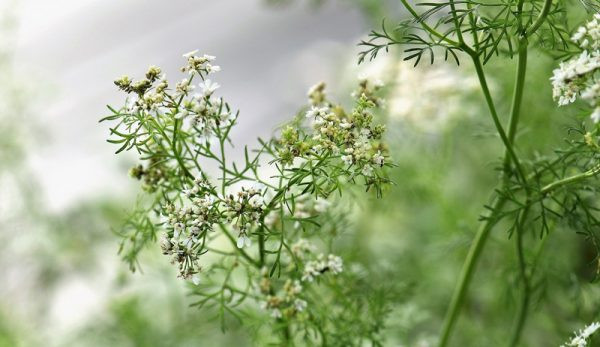 In the depths of winter, when freshly harvested herbs may be less available (especially from our own garden)s, we can turn to our spice cabinets to find unique flavors and healing medicines.

Before we continue, letŌĆÖs take a moment to discuss the differences between herbs and spices. For simplicity’s sake, weŌĆÖll approach this topic from a culinary standpoint. The botanical science behind the differentiation can get a bit complicated.

Simply put, we call the aromatic leaves harvested from an herbaceous plant herbs. This means a plant that commonly lacks a wooden stem. (Though some exceptions to thisŌĆösuch as bay leaf, a woody plantŌĆödo exist.)

On the other hand, the seeds, bark, flowers, fruits and roots of aromatic plants (dried and are typically crushed before use) bear the name spices. Examples of spices include cinnamon, turmeric, cardamom and coriander.

Coriander is the seed of Coriandrum sativum, an annual herb from the parsley family, Apiaceae. Native to Southern Europe, Northern Africa and Southwest Asia, coriander is thought to be one of the oldest spices on record. It was mentioned in the Bible and also discovered in ruins dated back to 5000 BCE.

Remains of coriander seeds were found in the tomb of King Tutankhamen. This led scholars to believe this pungent spice saw cultivation throughout ancient Egypt.

In North America, the leaves of C. sativum are commonly known as cilantro, while the word coriander is used to refer to the seeds. ItŌĆÖs interesting to note that ŌĆścilantroŌĆÖ is simply the Spanish word for coriander. In most places of the world, the latter term is used exclusively, regardless of which portion of the plant is being discussed.

The leaves of coriander have a tart, almost citric flavor, yet many people find the plant unpalatable, describing the taste as ŌĆ£soapyŌĆØ and offensive. This is due to a genetic trait found in approximately 25 percent of people that allows them to be more aware of the aldehydes found in the leaves. Commercial soapmakers use the compound to add scent to many soaps and detergents.

Read more: Grow culinary herbs for the kitchen and the coop!

Coriander in the Kitchen

The distinct flavor of coriander seeds is tart, earthy and sweet. A common ingredient in Indian, Middle Eastern and Asian cuisines, they bring a bright, strong flavor to curries and baked goods.

Toasting coriander seeds before use deepens their flavor. Ideally, you should grind seeds fresh, as they will keep their flavor and store better when kept whole.

Cilantro, the leaves and stems of the coriander plant, see wide use as a garnish in soups and salsas. In the U.S., cilantro commonly appears in pico de gallo, a fresh salsa traditionally made from chopped tomato, onion and serrano peppers with salt, lime juice and cilantro.

Coriander in the Apothecary

As one of the oldest documented spices, coriander has a long history of use for health and wellness. Primarily, however, it disguised unpleasant-tasting medicine because of the aromatic taste and characteristic odor.

Just including coriander as regular part of the diet is thought to lower blood sugar and promote heart, skin and digestive health. The seeds are carminative, and a tea brewed from coriander will improve digestion and boost metabolism.

You can make coriander seeds and leaves into an ointment to relieve tired and sore muscles as well as the pain associated with arthritis and inflammation.

Coriander is antibacterial and antifungal, so you can include it in formulations to prevent topical infections and to aid in the healing of wounds.

Learn more about herbs in the Healing Herbs annual from Hobby Farms magazine!

┬ĀCoriander is very easy to grow, even for gardeners with limited space. The first step is to decide if you are growing coriander as an herb, for its leaves, or to harvest the seeds later as a spice.

A number of varieties have been developed that are slow-bolting with heavy foliage. Others will quickly flower to then produce large, flavorful seeds.

You can enjoy the best of both worlds by regularly harvesting the cilantro throughout the season, before the heat of summer naturally causes your plants to bolt.

Regardless of which type of coriander you choose, they all prefer full sun to partial shade and well-drained, fertile soil. If youŌĆÖre hoping to have an extended harvest of tasty leaves, consider growing your plants in an area with partial shade.

Trimming back flowers as they develop will also extend your harvest.

Direct sow your seeds about 1/4 inch deep in late spring or early summer, and thin seedlings to around 6 to 8 inches apart. Remember to keep your plants well-watered, as an extended dry spell will trigger your coriander to flower.

Try planting cilantro in the early fall for a late harvest of the delicious leaves!

If you are growing coriander for its seeds, youŌĆÖll need to allow plants to flower. Bees love the white or light pink umbels of coriander flowers. And the honey crafted from these little flowers is reportedly delightful!

Allow the flowers to mature and die back before harvesting stems. YouŌĆÖll see the small green fruits where the flowers once stood. Place the stems upside down in a paper bag. Tie it all together into a bunch, and hang somewhere cool and dry.

Be sure to label the bag!

After three to four weeks, the seeds will have matured and dried down. Then simply shake the bag vigorously to release them from the stems.

Store seeds in a jar in a cool, dry place. Enjoy your harvest of coriander seeds in the kitchen or save to sow again in next yearŌĆÖs garden.

Coriander is a flavorful, if sometimes controversial, herb. This amazing plant brings joy to gardeners, chefs, herbalists and pollinators around the world.

Try growing these ancient seeds in your garden next spring!