From The Herb Garden: Rosemary

Remember rosemary, and for good reason! This herb’s fragrant leaves provide a healthy boost for the body, mind and spirit! 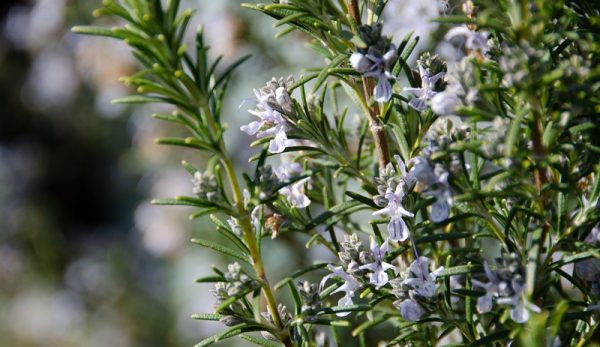 Rosemary is a delightful, aromatic herb native to the Mediterranean region. With its fragrant, evergreen leaves and delicate flowers, this useful herb offers a wide range of medicinal and culinary attributes that every gardener can enjoy.

You can find images of rosemary plants in ancient Egyptian cuneiform. Pharaohs would, in fact, have sprigs of rosemary laid in their tombs. But it was the Greeks and Romans that first made extensive use of the herb.

Rosemary has a long history of use as an herb of remembrance. Greek scholars would wear garlands of the olive-colored leaves in their hair. And the herb’s prevalent inclusion in wedding bouquets carried by brides on their special day is a tradition still observed in modern times.

Until 2017, rosemary went by the Latin binomial Rosmarinus officinales. But after much debate, those in charge of such matters deemed the herb too closely related to sage to remain in a separate genus. Rosemary’s scientific name was subsequently changed to reflect this, becoming Salvia rosmarinus.

Change can certainly prove difficult, though. And many plant catalogs still list the herb under its original Latin classification, which is now considered a synonym.

The name Rosmarinus is Latin for “dew of the sea.” It’s an appropriate title, considering rosemary’s affinity for growing along the rocky shores of the Mediterranean.

In ancient Rome, rosemary became associated with the goddess Venus, who was said to have risen to life from the foam of the sea. This association with a goddess of love is perhaps another reason why this evergreen herb is included in the matrimony ritual.

An interesting Spanish legend claims that Mary, mother of Jesus, draped her cloak over a rosemary bush while taking a momentary respite during her family’s journey to Egypt. It’s said that her garment turned the white flowers on the shrub to a lovely blue color, and that perhaps the herb’s name is simply derived from “Rose of Mary” thanks to this incredible transformation.

Read more: Coriander (aka, cilantro) is one controversial herb!

Rosemary in the Kitchen

Rosemary, with its piney scent and light lemony flavor, lends itself well to numerous applications in the kitchen.

Powder and add dried leaves to spice blends for use as a dry rub on meats. Add whole fresh sprigs to stews or soups. The leaves go well, dried or fresh, in marinades.

You can add finely chopped rosemary to fried potatoes, or any sautéed vegetables. But wait until the end to avoid burning the leaves. Too much heat is never good when cooking with herbs, and you’ll get optimum flavor by adding them to the dish towards the end.

Use the stems and branches of rosemary when roasting or grilling meats. Let them dry and then burn them in the coals or the cookfire to impart the meal with rosemary’s delicious, bright flavor.

Rosemary in the Apothecary

Rosemary is a member of the mint family, Lamiaceae. Like many other members of this family, it enjoys a reputation as a useful tonic for digestive upset and stomach complaints.

A simple tea, perhaps with honey or agave nectar to sweeten, will ease cramps and bloating.

In many of the older herbals, rosemary was infused in red wine and prescribed to improve heart health and strengthen the cardiovascular system.

Many of rosemary’s beneficial constituents, such as rosmarinic and ursolic acids, are alcohol soluble. So this traditional use holds to reason. But many modern practitioners would likely suggest use of a tincture for these purposes.

Rosemary’s use as an herbal tonic for the mind dates back to antiquity. But modern science is also beginning to explore and understand the effect that rosemary has on cognitive function. Not only does the herb improve circulation and protect tissues from inflammation, rosemary contains carsonic acid. This property has been linked with counteracting free radical damage in the brain.

In short, not only is rosemary tea delicious, it’s also good for your body and mind!

Read more: Grow herbs for pleasure and (just maybe) for profit, too!

Rosemary is a perennial evergreen that you can grow as an annual. You can also bring it inside in areas that experience cold winters. The herb is not frost tolerant and unlikely to survive temperatures below 10 to 20 F (-7 to -12 C.)

Plan to bring your plant indoors before it suffers exposure to freezing temperatures. Consider taking cuttings to root indoors for plants too big to move—a simple way to propagate soft-stemmed plants.

Rosemary prefers full sun. In areas where it can be grown as a perennial, it will also require space to thrive. The herb is drought tolerant once established.

A healthy plant can live for 20 years or more.

Plan to bring your rosemary indoors for the winter? Keep it in well-draining soil in a pot as deep as the plant is tall. For example, for a 8-inch-tall rosemary plant, you will need a pot with 8 inches of depth to accommodate the roots.

Add a layer of gravel or small rocks at the bottom of the pot to improve the drainage. Rosemary detests wet feet!

Place your plant in a well-lit area. Water dry soil every two weeks. Once or twice a week, use a spray bottle to mist the foliage, ensuring you dampen the leaves nicely.

With a little bit of care and attention, your rosemary plants will thrive. They’ll provide nourishing and flavorful leaves to use in your kitchen and apothecary for years to come.